NEW ENVIRONMENTS NEW CHARACTERS AND UPDATES
Mother Talzin, the vicious spiritual guide of the Nightsisters, makes her way to Galaxy of Heroes! Amidst the chants of Resurrection, Nightsister Spirit and Nightsister Zombie rise from the depths of Dathomir to join her. For more information on these exciting new characters, please see their respective Character Strategy posts linked below: In addition, Rey’s character name has been updated to “Rey (Scavenger)”
NEW EVENTS!
With this update we are introducing 5 new events into Galaxy of Heroes and bringing back our first Heroic Battle into an ongoing rotation. The events are:
Endor Escalation Heroic Battle is Returning!
Form a team of Ewoks and battle an AT-ST on the Forest Moon of Endor! Now in its “final form” this event has two tiers:
Rituals of Revenge Marquee Event
Form a squad (Nightsisters highly recommended) and join forces with MOTHER TALZIN to strike against the many enemies of the Nightsisters of Dathomir! In this Marquee event you will learn all about the Great Mother and her many powerful abilities. Once completed you will have enough shards to unlock your own 3-Star version of Mother Talzin!
Rituals of Revenge with run on October 20th.
Nightsisters Advanced Tactics (Flash Event)
A rebranding and redesign of our previous Flash event series, we are launching the first new iteration of “Advanced Tactics” with the Nightsister faction rework. This new event series is very different from the old Flash events: Secrets and Shadows Assault Battle
In this all new Assault Battle event form a team of Nightsisters and/or Phoenix units and battle powerful Dark Side enemies! Like all Assault Battles this event is intended for players at level 75 and above, and awards credits, unit shards (including Darth Nihilus, Sith Trooper, and Sith Assassin), and highly sought-after salvage including: As with all Assault Battle events, this is meant to be a challenge, so come prepared for a fight! Secrets and Shadows will run on October 21st.

The Separatist Army led by General Grievous and Count Dooku have invaded Dathomir! In this special time-limited event gather a force of Nightsisters (minimum 5-Stars) and defend Dathomir! This event will be available for a limited time and has two tiers: Ghosts of Dathomir Special Event 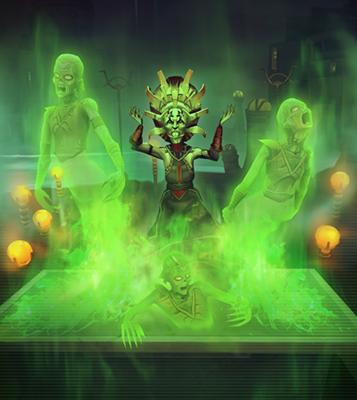