CG_SBCrumb_MINI
673 postsSWGOH Dev Team › EA Community Manager
August 24, 2018 5:35AM edited August 2018
I'm very excited to announce that we are launching the first round of major changes to mods that we have been talking about for the last few months! Today’s update is the first of several updates over the coming weeks to fully roll out the changes to the mod system.

In this update we will be changing how mod tiers are displayed in game, making it much easier to quickly browse your mods. Also included are two balance changes, we are improving Set Bonuses for some of the less used Mod Sets to improve their viability and changing how mods earn secondaries before slicing.

Speaking of slicing, this week you'll start seeing bonus drops for mod salvage on Hard Nodes! Get ready to start upgrading your mods right away once slicing is released.

We've got more big changes coming to mods in the coming days. Follow this POST and keep up with all the latest mod news.
PATCH NOTES: See below for a detailed breakdown of the changes!
PATCH DETAILS:
MOD TIER COLORING AND NAMING:
One of the things that has added to the difficulty of using mods is the fact that it is unclear which mods are the highest quality. A mod’s Tier (Color) is based on the number of secondary stats when it is acquired. For example a Tier A (Gold) mod has 4 secondary stats at level 1 where a Tier E (Grey) mod has no secondary stats at level 1. What is confusing is that we then increase the tier and change the color when leveling the mod. This results in all level 15 mods being Tier A (Gold) when there is a vast difference in the value of a level 15 mod that started at Tier A (Gold) vs one that started at Tier E (Grey). To better represent the value of the mod, we are no longer increasing the mod’s tier when leveling. 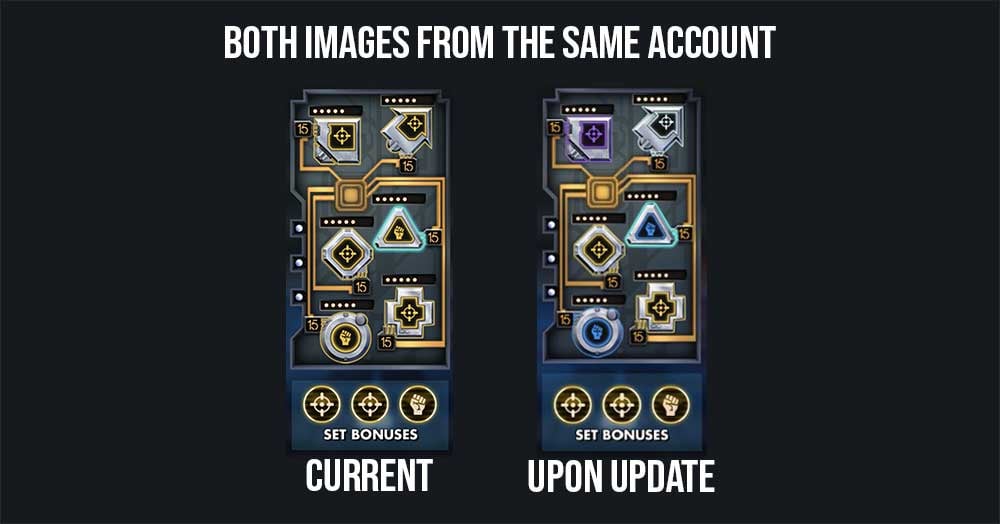 In this release, we’re going to set each mod’s color to the Tier of the mod when it was first acquired, however the mod’s stats will remain unchanged. This change is being rolled out prior to the client update so that you can get familiarity with how this affects your current mod roster. This may be somewhat of a visual shock, but keep in mind that the stats are not changing through this update. We’d also suggest that until these changes go into effect, you may want to avoid mass selling your 5-dot mods, so you can make a more accurate decision about their value.

SET BONUS IMPROVEMENTS:
We discovered a bug with the Set Bonus change and delayed this piece of the update. We are working to hotfix this as soon as possible.
The set bonuses of under utilized mod sets have been improved in order to give value to all mod sets. This provides new mod strategies such as focusing on health or defense sets for Tanks and making potency and tenacity sets a meaningful choice. No sets have been decreased and popular sets like Speed and Critical Damage will continue to have high value for many characters. 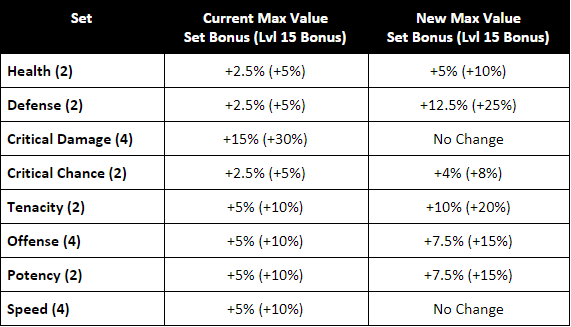 CHANGES TO MOD SECONDARIES:
The addition of slicing has resulted in us needing to make one change to how mod secondary stats are earned. As you know, the number of substats on a mod at level 1 is designated by its Tier/Color. So at level 1, mods will look like the following:

The change we are making is specific to green, blue, and purple mods. In the current system, these mods increase existing secondaries before adding new ones. For example a green mod will increase its one secondary stat before adding the other 3. This gives the green mod some added value as it guarantees its first secondary to get an increase.

We announced this change and implemented the lower mod leveling costs several weeks ago to give players time to upgrade their existing green, blue, and purple mods at a reduced cost prior to the change.

MOD CHALLENGE REQUIREMENTS CHANGE:
This update will make it much easier to acquire mods as another step toward making mods more accessible. We have made efforts in the past to do this such as moving to a 100% drop rate on Mod Challenges and are now going to take another step in accessibility by remove the specific character requirements on Mod Challenges. While we recognize the investment many elder players have put into these characters, a combination of data and player feedback is showing that a major reason why players are not engaging with mods is that they don’t meet the character requirements to do the more popular challenges like Critical Damage mods.

For a player getting started on mods, there is a large barrier to entry of getting the required characters, only to begin the search for a set of “perfect mods”. This results in new players having to make a hard choice between investing in the characters that best help their guild, such as characters needed for Raids/Territory Battles/Territory Wars/Legendary Events or to invest in characters for Mod Challenges (like Jawas). We believe that the sooner a player starts engaging with mods the sooner they can start making meaningful contributions to their Guild and this change will enable those contributions.

BONUS DROPS:
For a limited time all Light Side and Dark Side hard nodes will reward mod salvage as bonus drops. Start earning this slicing salvage now and get a head start on mod slicing upon release!