Here's how I earned my 7* Chewy without Dengar or Bossk, total F2P 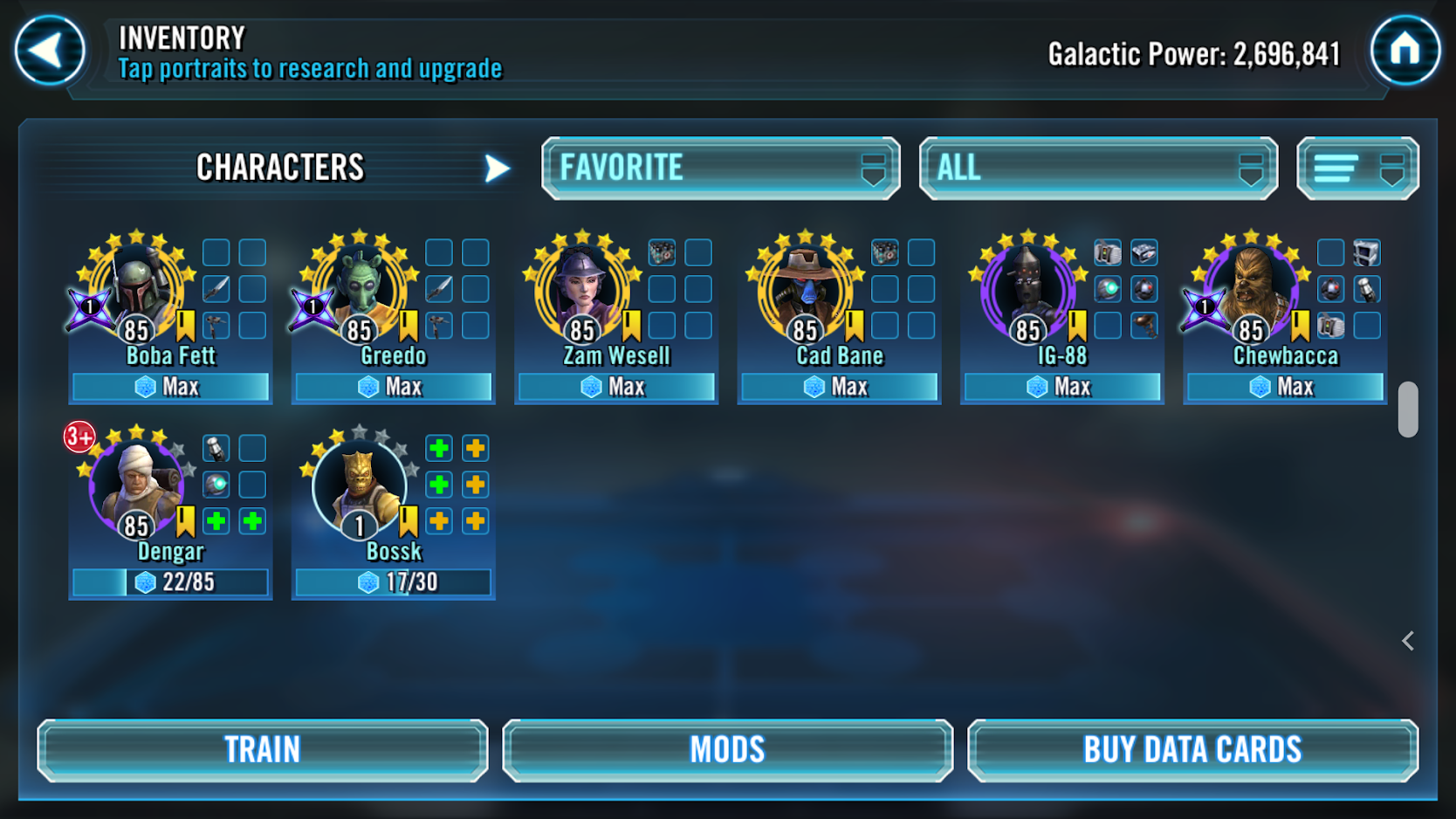 As the title says, I finally earned my 7* Chewy without Dengar or Bossk, and I have not spent a dollar on this game in my 3yrs of playing. Don't give up hope, it really is possible! I spent several hours worth of attempts and switching out mods to see what works. After I made the final mod changes to Boba and Zam as described below, it took me just a handful of attempts to complete the 7* event. So, either they were the major game changers, or I was just extremely lucky.

At the end of all this, I had Boba Fett and Cad Bane left standing.

Leader - zBoba Fett
* Modded for Crit Damage and Crit Chance. One thing I noticed during my endless number of attempts is Boba missed a lot when using either of his non-Execute attacks because of the +Dodge buff the other team has. I remedied this by changing the primary stat on the upper-right arrow mod from +30 Speed to +12% Accuracy. Once I made that change, I don't remember ever missing (at least not with his basic attack). 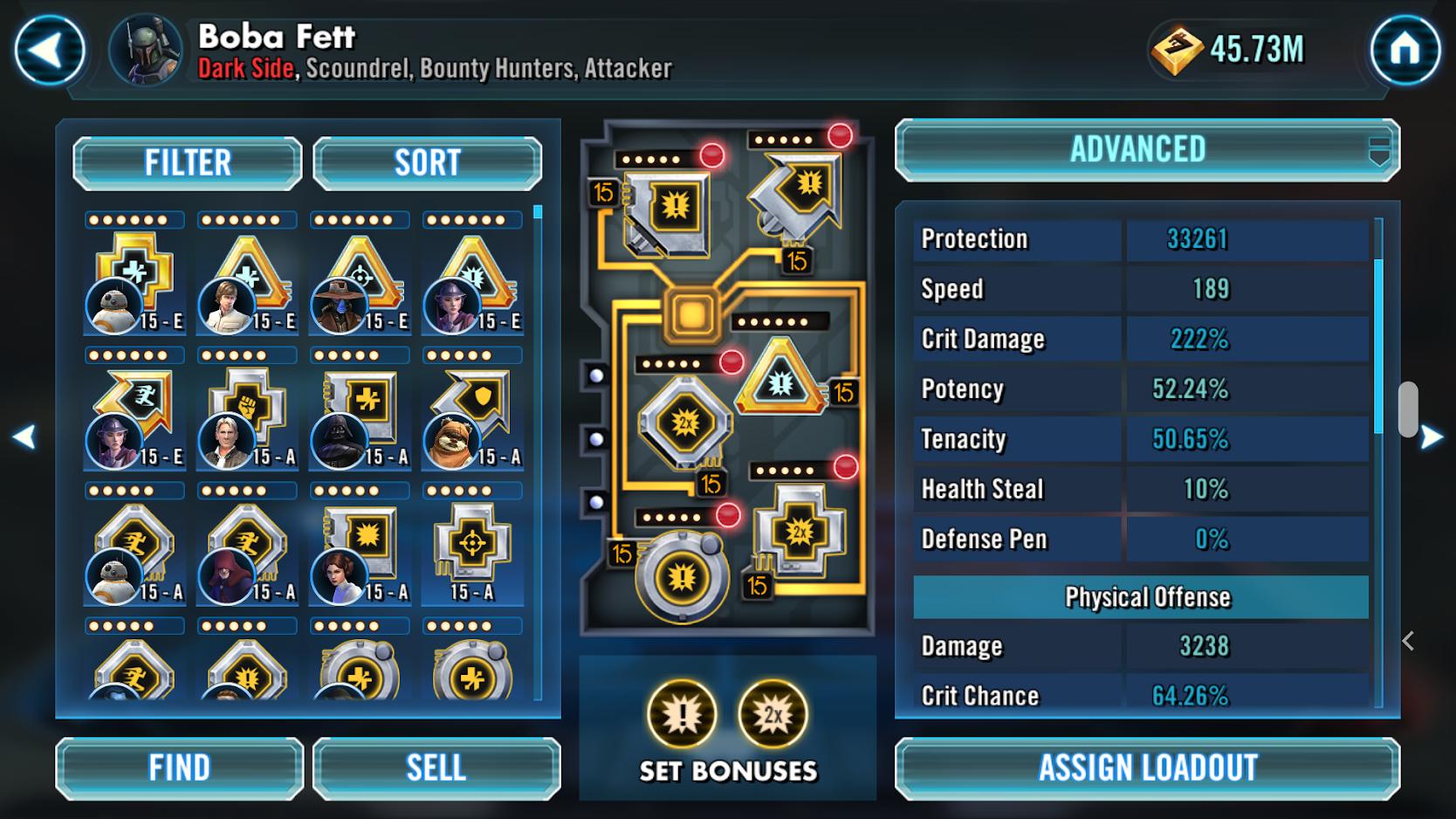 Zam Wessel
* I originally had her modded for Potency as much as possible, but she would often only land about 2, maybe 3 Thermal Detonators at a time. I then went back through and modded her with all the highest speed mods I have, not paying attention to the mod type. For reasons I cannot explain, she somehow started landing 4-5 TDs on a regular basis. With BF's leader ability granting 15% turn meter each time a TD explodes, this helped boost the speed of the whole team. 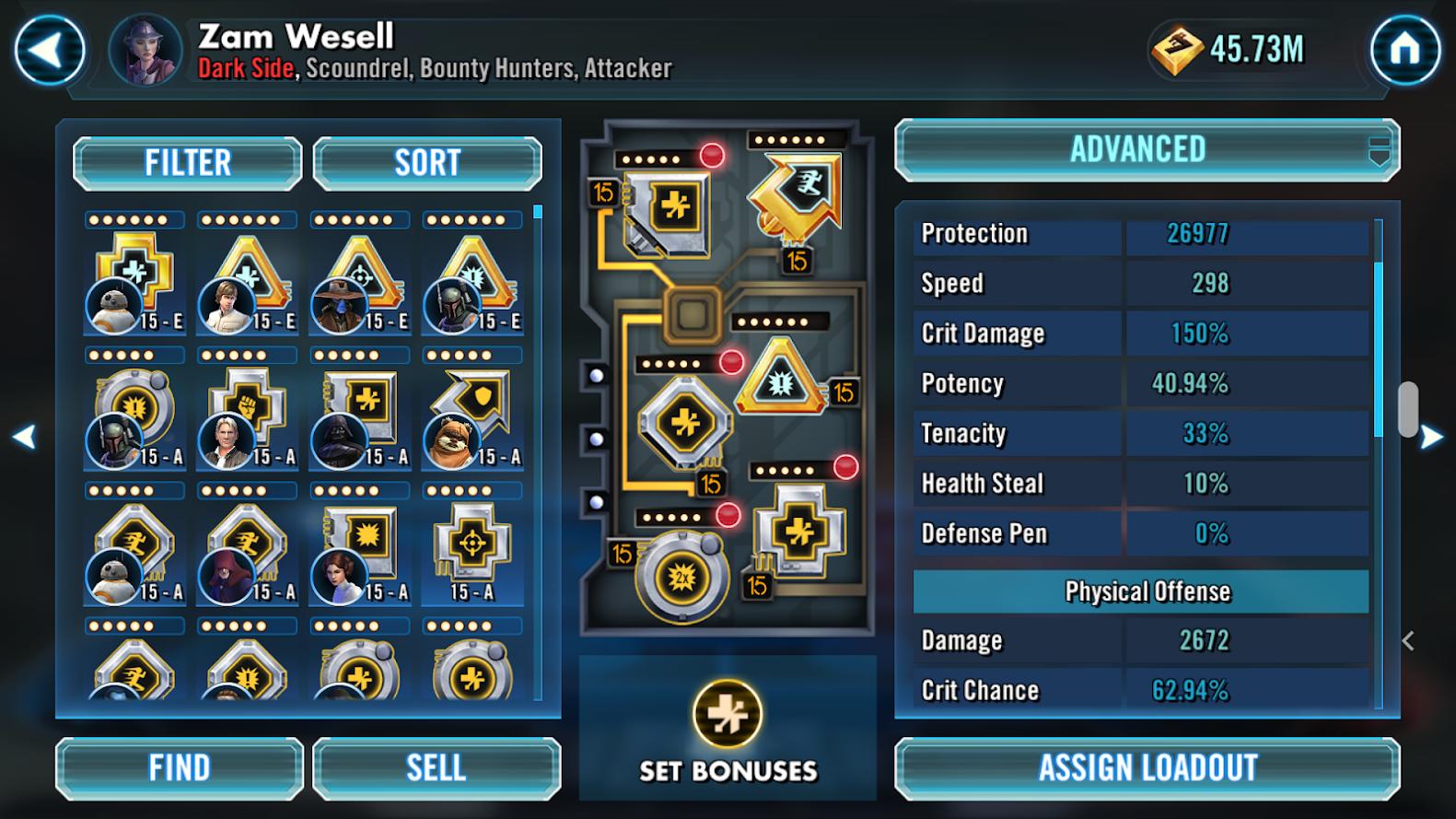 zGreedo
* Modded for Potency. In my experience, Greedo's zeta is helpful (mostly with stunning R2 to prevent Smoke Screen) but may not be necessary. 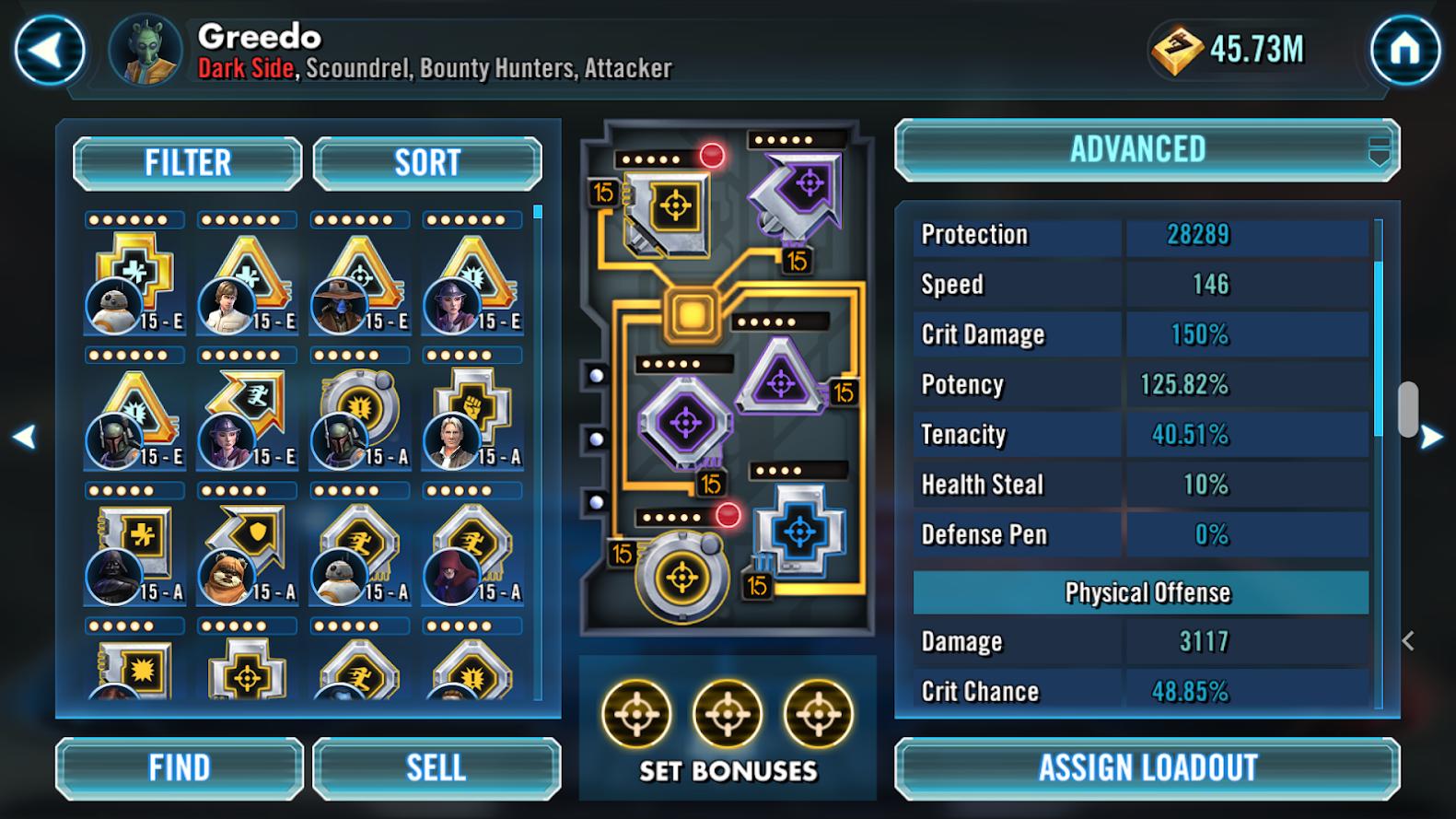 Cad Bane
* Modded for Potency. The health mod in the lower right has +24% Potency for the primary stat, giving me a larger boost than the +15% given with the paired Potency mods. 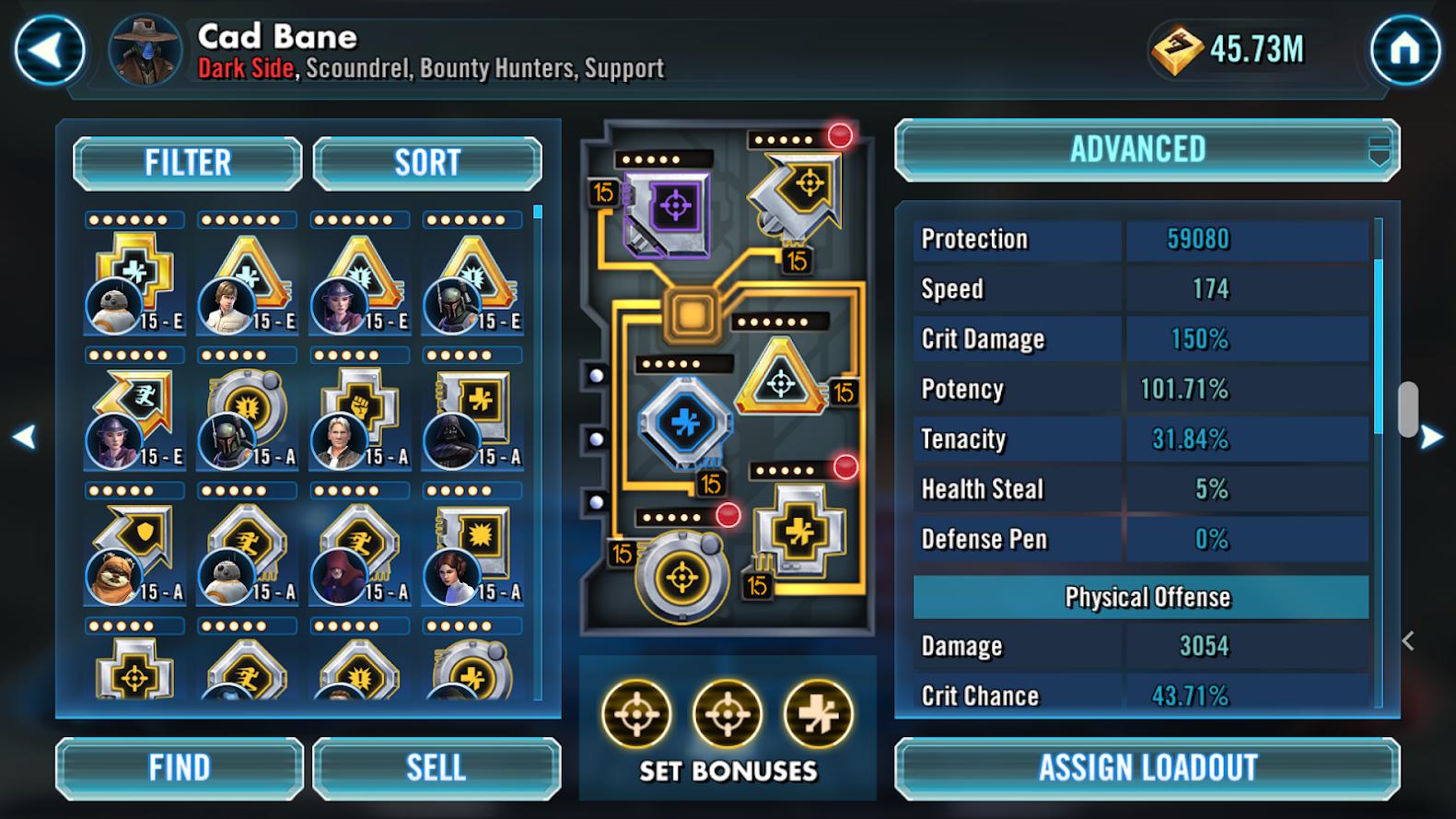 IG88
* Modded for Potency after giving the others priority of mod choice. IG88 is very squishy and does not last long at all in the fight, but can be at least a little helpful if you are able to land either a heal block with his normal attack or ability block with his AoE. 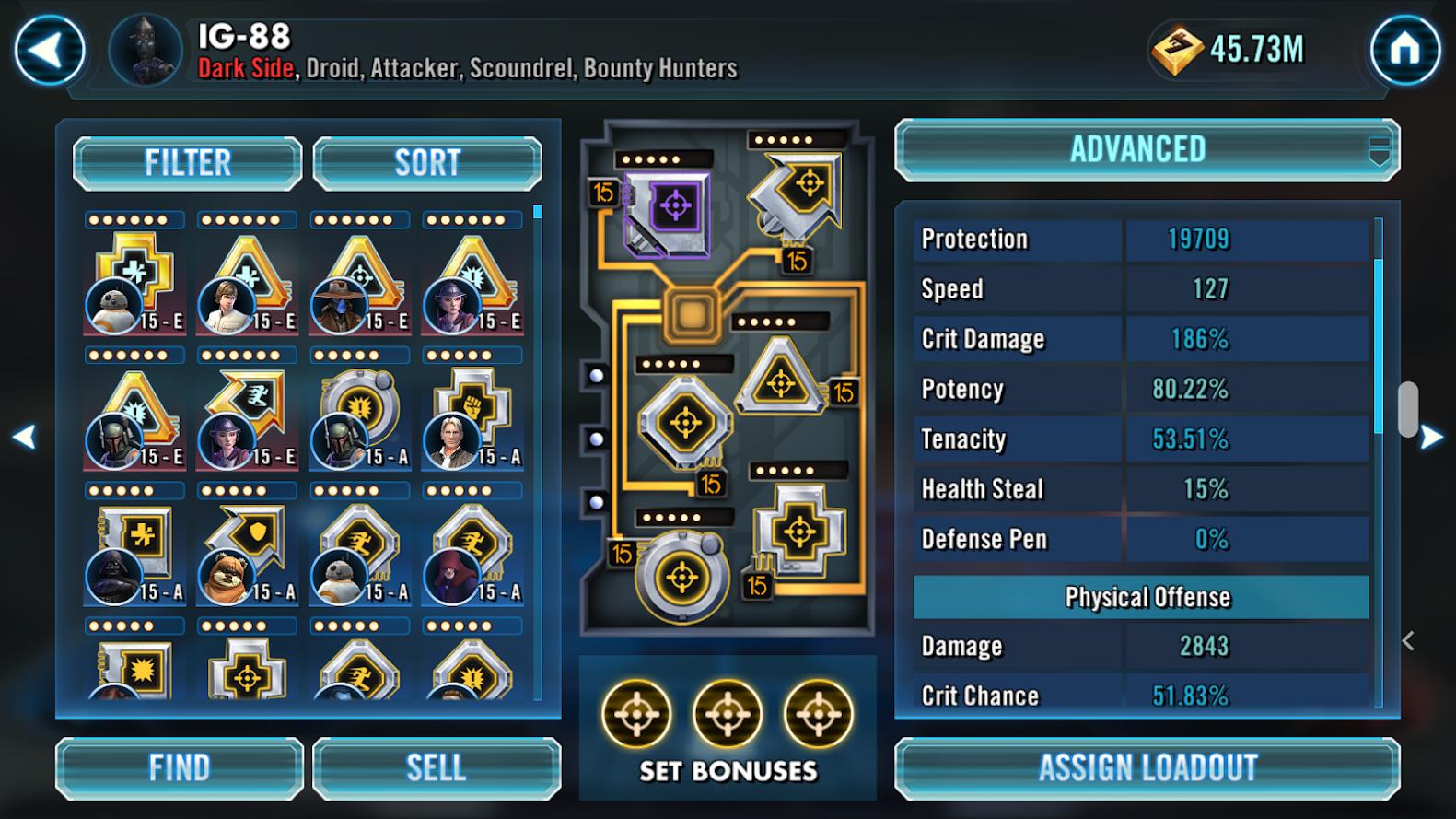 Since I do not have Dengar, my first priority was to ability block or stun R2D2 to prevent Smoke Screen. Fortunately with this team, there are several options with Boba Fett's and IG88's ability block by their AoE's, or by stunning with Cad Bane or Greedo (zeta). There was also a chance taken once or twice to instead stun or block another toon if I thought another one of my BHs would be able to stun/block R2 before his next turn - ie. choosing instead to first ability block Leia to prevent her AoE (which in turn causes ability blocks on my team) if I saw Greedo with near full turn meter, and knew his Threaten was ready to remove R2's turn meter and stun (zeta).

The first to be killed was Lando. Zam's Thermal Detonators and IG88's AoE weakened Lando to the point where Boba was able to finish him off on his 2nd turn. This was fortunate because BF had already been killed once at this point so he was able to replenish his Bounty Hunter's Resolve and 100% protection (zeta).

The 2nd to go was Chewy. Both Greedo's and Zam's TDs weakened him enough to where Boba was able to Execute him by his next turn, and again regenerate 100% protection (zeta).

The 3rd to die was Han. With Chewy dead, Han was open for crits and was able to be killed off fairly quickly, mostly due to Zam and her high speed & TDs.

4th down was Leia. This was where RNGesus was kind. I possibly could have still won the fight at this point if it did not go exactly as it did, but each of my attacks applied the intended debuffs that secured the victory for me. I remember this being one of the chances I took (as mentioned above) that fortunately worked out for me. She was near 100% TM and R2 I think was around 50% TM. I believe I had Cad Bane set to attack with Stun Glove so I used it on her instead, then was able to follow with Boba's Death from Above to apply ability block to R2. The next attack finished off Leia.

Finally, was R2D2. At this point, only Boba Fett and Cad Bane were left standing. Each attacked a round or two with their basic abilities until Boba was able to Execute R2 for the win.


I hope this helps out even one single person because this event is extremely frustrating, especially after you realize you didn't farm the 'correct' Bounty Hunters for this event.