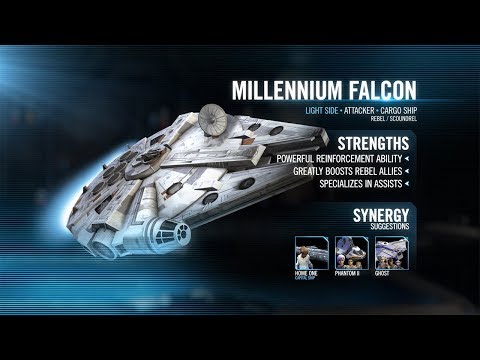 FINAL TEXT: Deal Physical damage to target enemy and call another random Rebel ally to assist. Inflict Target Lock for 2 turns on a Critical Hit. If the allied Capital Ship is a Rebel, dispel all buffs on target enemy.

FINAL TEXT: The Falcon dispels all debuffs from itself, recovers 50% Health and Protection, and gains the Outmaneuver unique buff for 3 turns (can't be copied). Additionally, it gains 35% Turn Meter for each Rebel ally and Empire enemy.

Outmaneuver: +25% Evasion and can't be targeted while other allies are present

FINAL TEXT: Deal Physical damage to all enemies and grant all allies Defense Penetration Up for 2 turns. This attack deals 25% more damage for each Dark Side and each Empire enemy.

FINAL TEXT: All allies gain 10% Critical Chance, doubled for Rebel allies. The Falcon has a 50% chance to assist whenever another Rebel ally uses an ability during their turn. Whenever an ally reinforces, the Falcon grants them Accuracy Up for 2 turns. If that ally is a Rebel, they also gain Critical Damage Up for 2 turns. Additionally, when another Rebel ally is inflicted with 3 or more different debuffs, the Falcon dispels all debuffs on them.

FINAL TEXT: Grant all other allies Foresight for 2 turns and call all Rebel allies to Assist. Additionally, reduce the cooldowns of the allied Rebel Capital Ship by 1 for all abilities except Call Reinforcement.
Post edited by CG_SBCrumb_MINI on January 2019
18