GUIDE: No Wicket, No Logray

Darth_Drizzy99
18 posts Member
March 18, 2019 7:34PM
Wanted to share my strategy for taking on this event without Wicket or Logray. I was able to get CPO to 7* without them (picture of squad is below for proof) and if there are others out there like me who don’t particularly enjoy Ewoks or want to spend time farming them, this is the route to go.

1) Gear, Mods, and Zetas: to unlock him at 7*, you’ll have to have zetas on Chirpa and Paploo. Additionally, you’ll have to have all omegas on all of the other abilities for all Ewoks. For mods, speed is obviously key. Get speed to ~220 per Ewok, with the only exception being Paploo, as he gets a boost from his ability. For Paploo, make sure he has as much health/protection/defense as possible—he has to be able to withstand a few onslaughts. For gear, I only had CC and Elder at g12. It was important to get them to g12 to be able to put my 6 point arena mods on them, which gave good boosts to speed and health.

2) Strategy: for strategy, the most important thing is to take Chewie out first. In fact, if he gets stealthed on the opening sequence, I’d recommend just starting over. If he isn’t stealthed, use Paploo to remove Endor soldier’s taunt, then focus on Chewie. Call Elder to assist any time you can to boost TM, and don’t over-heal with Elder—only heal when it is necessary or someone is dead to try and get a revive too. Keep Teboo’s special that removes buffs for once you get him under 100% health and Endor soldier taunts again, and remove it. Then, keep working on Chewie, then move to Han. The most important thing to keep track of while going after Han is R2’s turn meter, to make sure he doesn’t stealth him. If he is gaining turn meter, use Teebo’s special again to remove his turn meter. If you can kill Chewie and Han and keep Elder alive, you’re set to beat the rest of it. Take care of Endor soldier, Leia, and R2 and you’re golden.

3) Luck: as is the case in this even with any team, you’ll need to get lucky with the RNG (but it is especially needed with this team). Specifically, you’ll need to get a revive or two on Elder’s healing ability, and you can try and use Teebo’s stealth ability to get stealth on Elder to protect him. RNG is everything here, and as you do it more you should see the possibilities for success in it.

4) Patience: if you’re doing the event without 2 of the 3 best characters, obviously it won’t be easy and will take a lot of tries. I spent about 20-30 minutes every day on the event, and got him to 7* on the 6th day of the event. So be patient, keep acquiring gear and mods, and learn from your defeats.

Hope this helps some of y’all and let’s you know it’s possible without Wicket or Logray! 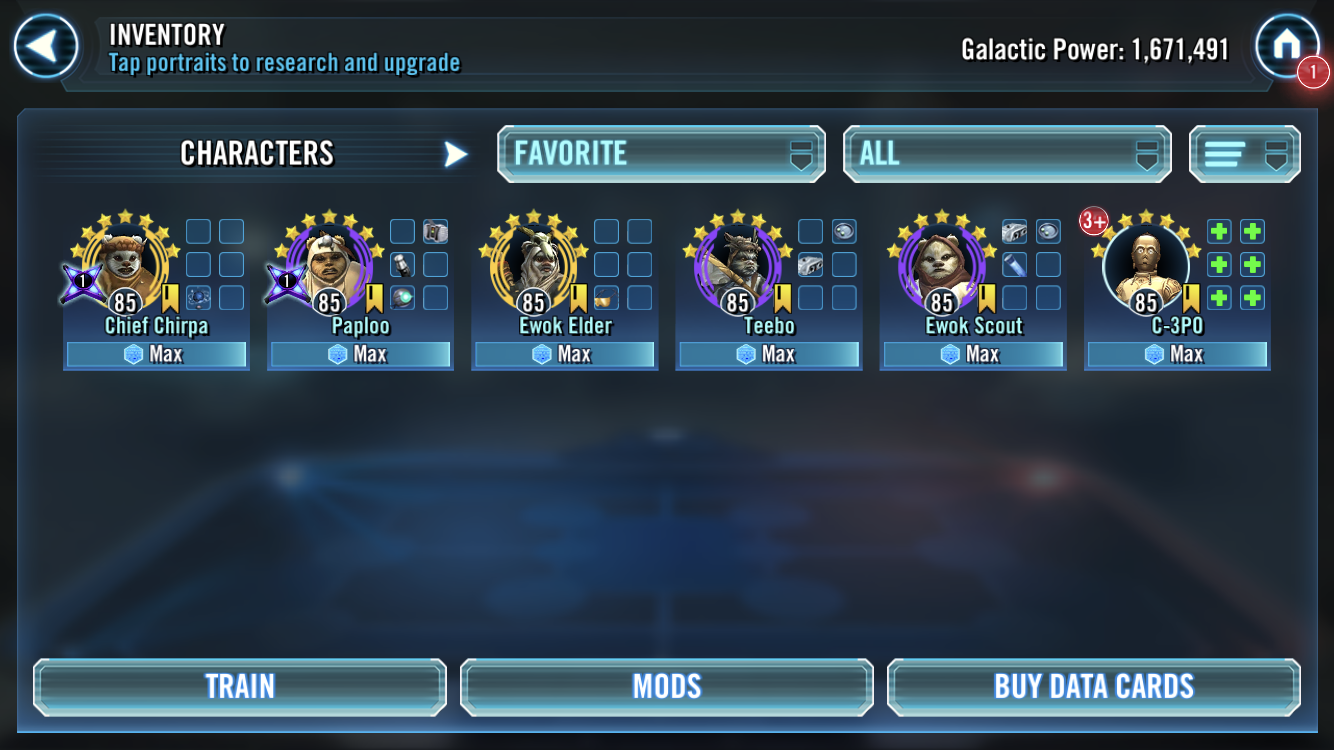