Hot off the presses and just before we kick off our booth at Celebration, it's the Road Ahead! It’s been just over a year since I started writing the Road Ahead more formally and in commemoration of this, I wanted to talk about some of the topics from that blog to reflect on changes we’ve made in the past year, additional things we are going to be doing, and as always, the exciting things we have planned for the near future.

Intro and Communication Updates
One year ago we committed to a format of the Road Ahead that was based on a few different criteria including some requirements inside of EA that as of this month have been changed, and we have also received feedback from you as well, which has allowed us to reflect on the structure in its entirety. While we will continue to strive to post the Road Ahead inside of the first few weeks of a quarter, and we may for some time, you will likely also see changes to the format. The goal would be to tell you things more frequently instead of big chunks of news and then relative silence for weeks or months. As we work toward that cadence, we will continue to do big beats of information as needed, and we will also explore other types of communication. We know that information is valued and we also know that somewhere right now, someone is reading this message aloud on a podcast or YouTube video and poring over every single choice of word. Things like whether “very difficult” means the same thing as “quite challenging”. We try to think about those things and explain our intentionality, and we will continue to search for opportunities to clarify our perspective.

Something in particular we've been exploring is showing you behind the development curtain and provide some insight into how we operate. We’ve been thrilled to be able to partner with Lucasfilm to bring you some “behind the scenes” work on both Jedi Knight Revan and Darth Revan, as well as reveal Developer Insights on how we think about characters and we are going to continue down this path, trying to provide as much of our perspective as possible, when it comes to how and why we do or build things. We will also be doing another Developer Q&A in our official forums inside the next month, so keep an eye out for info on that here.

Character Cadence Update
Another topic that we know is near and dear to everyone is the Character Release Cadence. At its core, Star Wars: Galaxy of Heroes is a game about collecting characters and how and when they are released is always a topic of much conversation. However, as the game evolves, so must the way in which we release characters. You’ve already seen a couple Galactic Chase events, for both the Ebon Hawk and Emperor’s Shuttle, and some changes to how we are merchandising Marquees with Droideka.

One of the core ways in which we release characters is Marquee Events, and while we will still be doing Marquees, there are going to be a lot fewer Marquees the first half of this year than there were in the same time period last year, and instead, you’re going to see more and more reworks visiting the Holotable. The reason for this is pretty straightforward – there are a number of characters that, by nature of a deep and ever evolving game, did not perform as well as they should. We’re going to be tackling a number of these characters head on. With all reworks, our aim is make them undoubtedly perform better. However in some cases, like in the case of the recently reworked HK-47, we changed his core identity as a Droid leader by giving him a new role in the Sith Empire team which, in giving him power and synergy with his master Darth Revan, resulted in us nerfing his leader ability. Overall, we feel he is a more interesting and balanced character than before the rework but he’s fits into a substantially different team and role. For that reason, we decided to refund investment in that leader ability, and every time we make a significant change, we will attempt to make that calculation.

However, the time that the design, balance, QA and other teams spend on these reworks is sometimes more significant than it would be to make a new character from scratch. Since many people already own these characters and have invested in teams to use them, it’s critical we get the balance right and do our best to respect players’ previous investment in any characters we change. I say this to highlight that we try to think about all these things in a balance - Marquees and Reworks - with our eye toward different goals for the playerbase. For example, we just revealed a new kind of release that is “very very very significantly difficult and quite challenging” called Mythic Battles. It's not like the other types of releases we've had until this point, but we think that the theory-crafting and sharing of strategies is going to be at another level. You’ve been warned.

And a quick note on character power. We’re aware, as it is an age-old quandary in games like this, of the issues of dominance for certain characters in the meta. There will always be some pretty dominant characters, but our hope is that a variety of competitive teams filter into the community over time, and that the primary “meta” of the game becomes a little bit more balanced in the future. While it may not be a true rock-paper-scissors meta, and while it will take some time to execute, this is the targeted end state - this end state is a reflection on some of the competitive gameplay changes we’ve slowly been making as well.

And now, the actual Road Ahead…

Hello There!
When we originally planned the last year of content, we found a chunk of time for us to explore content that the studio is very passionate about in the Star Wars universe (Knights of the Old Republic) between two important moments for the franchise (Solo and Episode IX). And while there are many more characters we want to bring from the Old Republic era (I’m the reason you see Khem Val on every consumer survey), we are starting to shift our focus to a different era that we are going to spend some time on. This doesn’t mean every release from now until Episode IX will be from this era, it just means that it provides a structure for the content and some of the features we’re doing. And that era, whether the inspiration comes from the prequels or animated series, is the Clone Wars.

Starting off, we’re going to be doing reworks of the trio of master duelists from the Jedi Order, Anakin Skywalker, General Kenobi, and Ahsoka Tano. General Kenobi, for example, is already one the most used characters in our game and so we will most likely focus on changes related to synergies with the other two rather than pure power, as we did with the recent changes to Bastila Shan (Fallen), but the intent is for the three characters together to synergize and elevate the value of each other. We will have more to share with their kit reveals in the upcoming weeks. We’re going to be playing around in this era for quite awhile so expect to see more old and new characters from this era to come front and center.

Territory Battle on Geonosis
With our eyes on Clone Wars, we are thrilled to announce that around the time of the next big feature update (TU16), which will land inside of the next three months, we will be launching the first map of a brand new Territory Battle located on Geonosis. In anticipation of the launch of a brand new map, we recently streamlined the Hoth map platoons so players can more efficiently clear Hoth. The new Geonosis map will have new characters along with special events, and we are eager to share more details as we get closer to release. 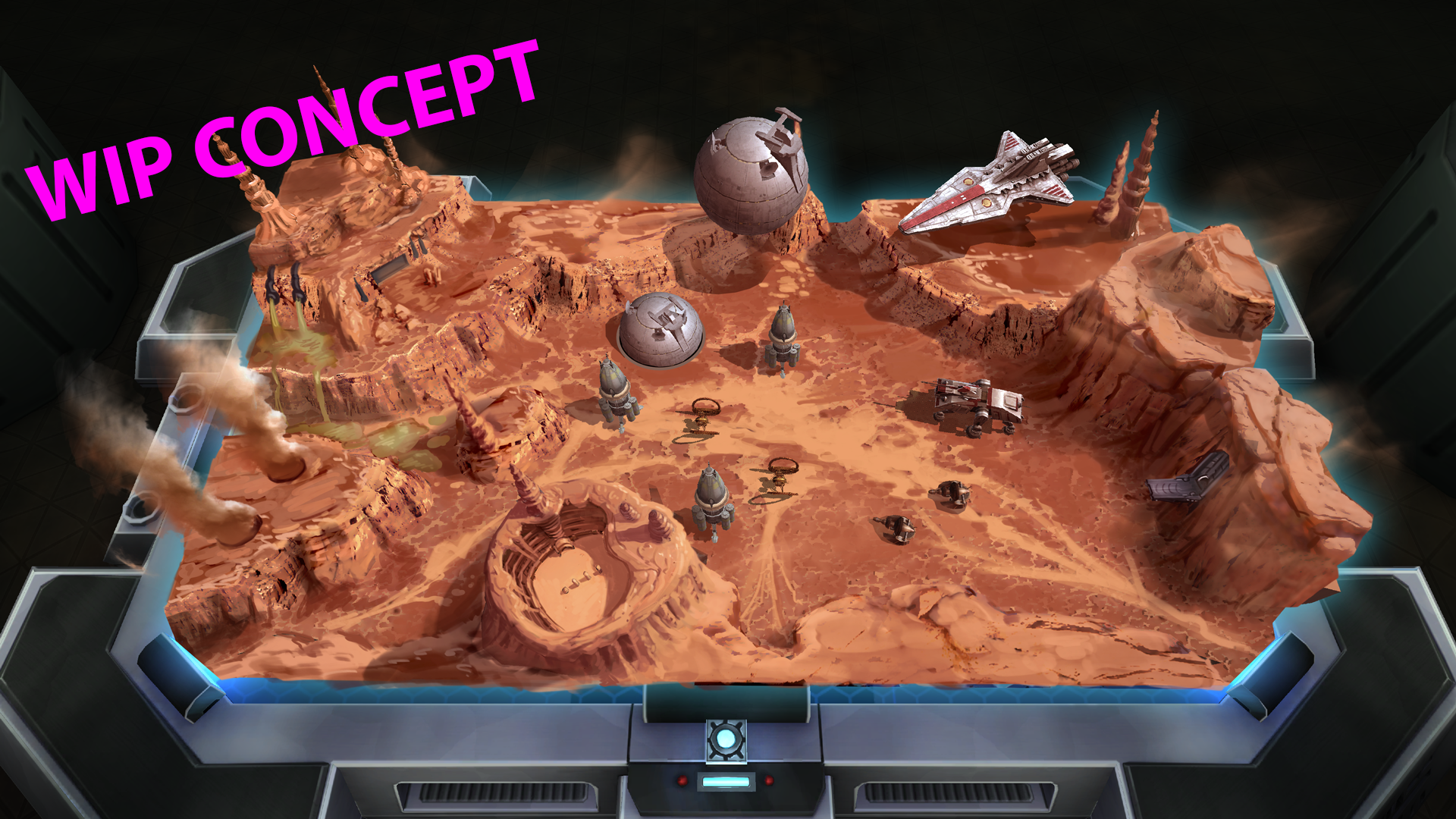 Grand Arena Championships
In that update we are also going to be releasing an extension to Grand Arena, called the Grand Arena Championships. A Championship is a multi-week series of Grand Arena events and competitive challenges, where players can fight their way into more and more exclusive leagues for higher rewards and ultimate bragging rights. This next update is intended to be the start of a new era of competitive play in Galaxy of Heroes, and over time there will be more and more ways to demonstrate that you are among the very best SWGoH players in the world.

We have solicited some players for feedback on the initial designs of the Grand Arena Championship and will begin a restricted beta in the upcoming weeks.

Star Wars: Celebration!
Stop by our booth and talk with any of our team members in attendance about the upcoming new Clone Wars content or watch the Star Wars’ shows coverage of the event on April 11th. If you are attending, swing by early and drop off your ally code to get some swag.

There’s been a lot of excitement and passion from the players throughout our entire development cycle, and we always endeavor to be worthy of your time and attention. We are so happy to continue to play in this sandbox and provide new challenges. And as always, we’ll see you on the holotables… and at Celebration!

-Carrie Gouskos
Senior Producer
Senior Producer, Galaxy of Heroes
Post edited by Carrie on April 2019
59
Reply to this topic
This discussion has been closed.