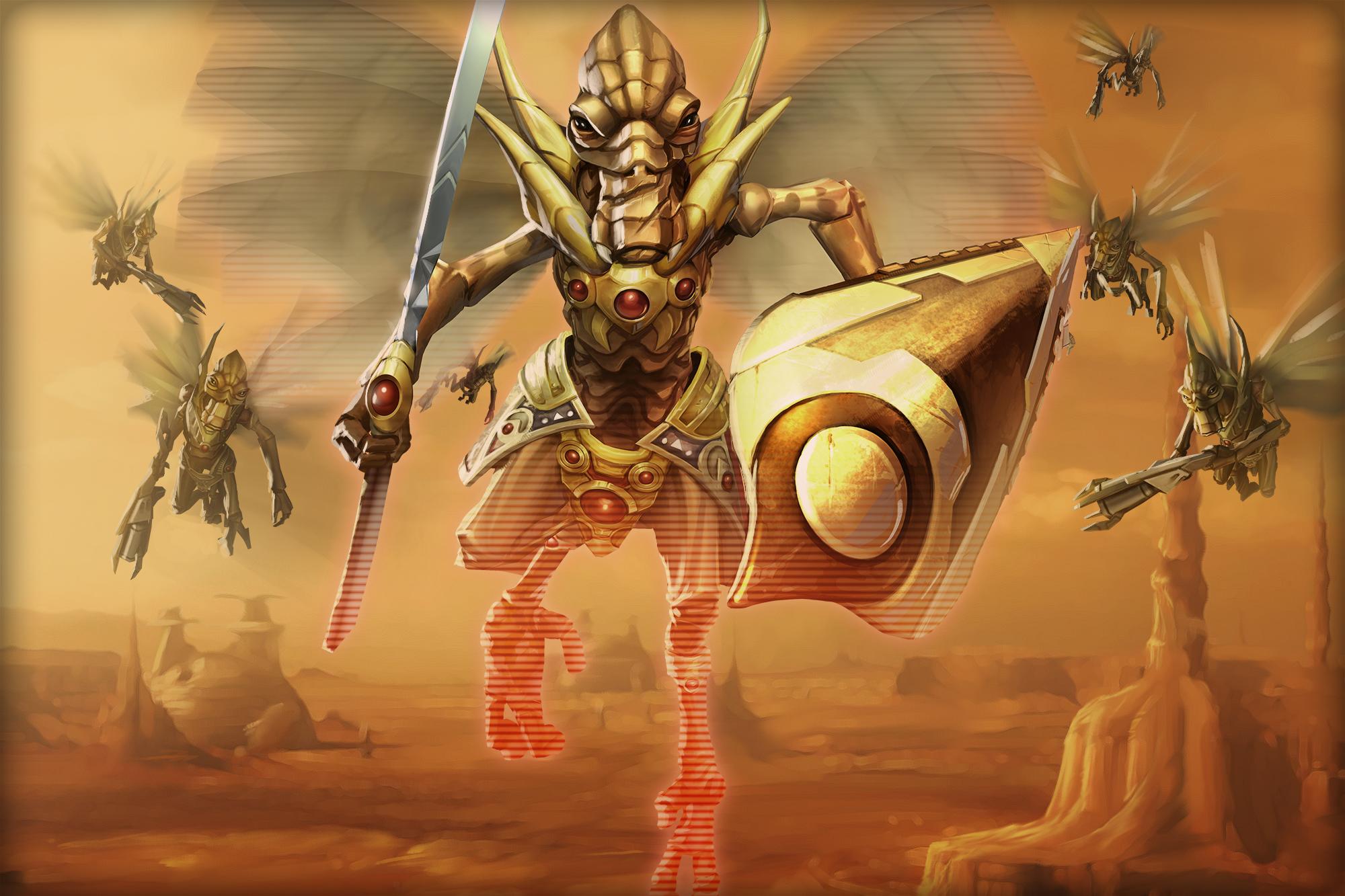 Today, we are showcasing the Geonosian Brood Alpha, who will be needed to unlock Wat Tambor from a special mission on the new Territory Battle map. Read on to hear from CG_ParkingInstructor about this unique Geonosian and then hop over the Arena and Character Strategy section to check out the kit!

OVERVIEW
Q: Why are we excited about this character?
CG_PI: This character really brings the Geonosian team together by enabling the squad to take many extra attacks while providing a ton of sustainability. We had to make some changes to Geonosian Spy to avoid creating an infinite loop (read more on that here) but this gives us the space to design and update the Geonosian faction even further.

Q: What makes this character special?
CG_PI: Geonosian Brood Alpha has one of the most unique abilities yet, summoning! The Alpha can summon a Geonosian Brute into an empty ally slot and fight for the team. When the Brute is defeated, just summon another one! We only just got the tech to summon units in the latest title update so I am really excited to see what the future for this mechanic holds.

Q: Why did we create this character?
CG_PI: The Geonosian squad were in need of a 5th member to form a full team and we knew Geonosians would be part of the new Territory Battle. This leaves the question, who should lead this squad? Poggle, despite being a fierce combatant in his youth, is more of a politician than a fighter in modern days. We wanted the leader to feel almost like a grizzled sergeant from a war movie who fearlessly leads his troops into the fray. As part of this made up narrative, we decided he’s a champion of many wars and that theme should feed into his visual design. The Art team did an amazing job creating a visually interesting and distinct looking Geonosian fighter that stands apart from the other bugs.

Q: How does that play into your intention for the character?
CG_PI: With Geonosian Brood Alpha being the head of the squad, it makes sense for him to be able to summon other Geonosians to aid him in battle. We also want to introduce some sort of hive mechanic to the Geonosian faction. I asked around the studio what people think about when they hear the phrase "Hive Mind", the answers were pretty consistent: coordinated attacks, and difficult to get rid of individually. That eventually became what Hive Mind is now in the game: Assist attacks and Health/Protection equalization with other Hive Mind allies.

PLAY STYLE
Q: What squad lineups do you suggest?
CG_PI: If you want to take full advantage of the Hive Mind buff, bring in a full squad of Geonosians but there are also some subtle synergies between Geonosian Brood Alpha and some of the newly reworked Separatists that we are excited for the players to discover.

Q: Which modes are the best for this character?
CG_PI: They are awesome in PVE, especially in the new Geonosis Territory Battle. Players will also find them a strong offensive option in Grand Arena and Territory War.

Q: What’s your suggested battle tactics?
CG_PI: Geonosian Brood Alpha brings a lot to the table with summoning and his Hive Mind ability. Hive Mind provides sustainability to the squad and players should focus on healing the Geonosians whenever possible by using Conscription. Then wait for the right opportunity to strike with Glaive Sweep and expose the enemy team.

TIPS & TRICKS
Q: Any special interactions we want to highlight?
CG_PI: Hive Mind sustains the team in a unique way by equalizing all Geonosian’s allies health and protection when the enemy uses an ability. This requires a different strategy to defeat. When facing the Geonosian Brood Alpha try to overwhelm the Geonosians with heavy AoE damage.

Q: What will challenge this squad?
CG_PI: You should watch out for squads that have can deal large amounts of AoE damage. The Triumvirate under Darth Traya, which punishes out of turn attacks are also extremely challenging for the Geonosians to beat.

Q: What should we know about this character that we may not notice at first glance?
CG_PI: Do not underestimate the power of Health and Protection equalization. It can provide a massive amount of survivability to the team and slow the enemy from focusing down a single ally. In addition, the Conscription ability has powerful healing and dispel and is useful even if you have your Brute already on the field.

CLOSING
Q: Anything else to add?
CG_PI: We love bringing cherished Star Wars characters into the game, but it's also super exciting to create a new character in the Star Wars universe. Our art team did a phenomenal job at creating this character's model and animations, and I really hope the players enjoy it.

24
Reply to this topic
This discussion has been closed.