This week we are exciting to be talking about the Geonosis Territory Battle and one of it's rewards! If you haven’t already, check out the kit for Negotiator, who will be unlocked with GET MkII from the new Geonosian Territory Battle map. Read on to hear from CG_Mandelorian discuss his thoughts on designing this intriguing new capital ship.

Q: Why are we excited about this ship?
A: First and foremost, it’s a new Capital ship!!! We haven’t had a new one in quite a while and this is a great opportunity for us to expand the range of options in Fleet Arena. It’s also pretty exciting to give General Kenobi his ship from Clone Wars and create a very different place style from Mace Windu’s Endurance.

Q: What makes this Capital Ship unique?
A: This Capital ship will be part of the Galactic Republic, like the Endurance, but much more offensively oriented. There is a new buff, Unending Loyalty, which allows Galactic Republic ships to survive the first mortal blow and keep dishing out damage.

Despite being the same Venator class starship as Endurance, Negotiator is visually different as it is flanked by two Arquiten-class Cruisers who provide fire support. On top of that, the ultimate looks amazing! A squadron of Clone Wars era BTL-B Y-Wings pouring out of the Negotiator for a bombing run and decimate the enemy fleet.

Q: What scenes or moments were you trying to capture?
A: I don’t believe Negotiator is ever in the prequels and a fairly rare sight in Clone Wars but season 1’s Malevolence arc has a ton of great scenes with the full fleet. I really wanted to bring the experience of commanding an armada of Y-Wings and Arquitens along with this capital ship. Their combined firepower is a sight to see on the holotables. 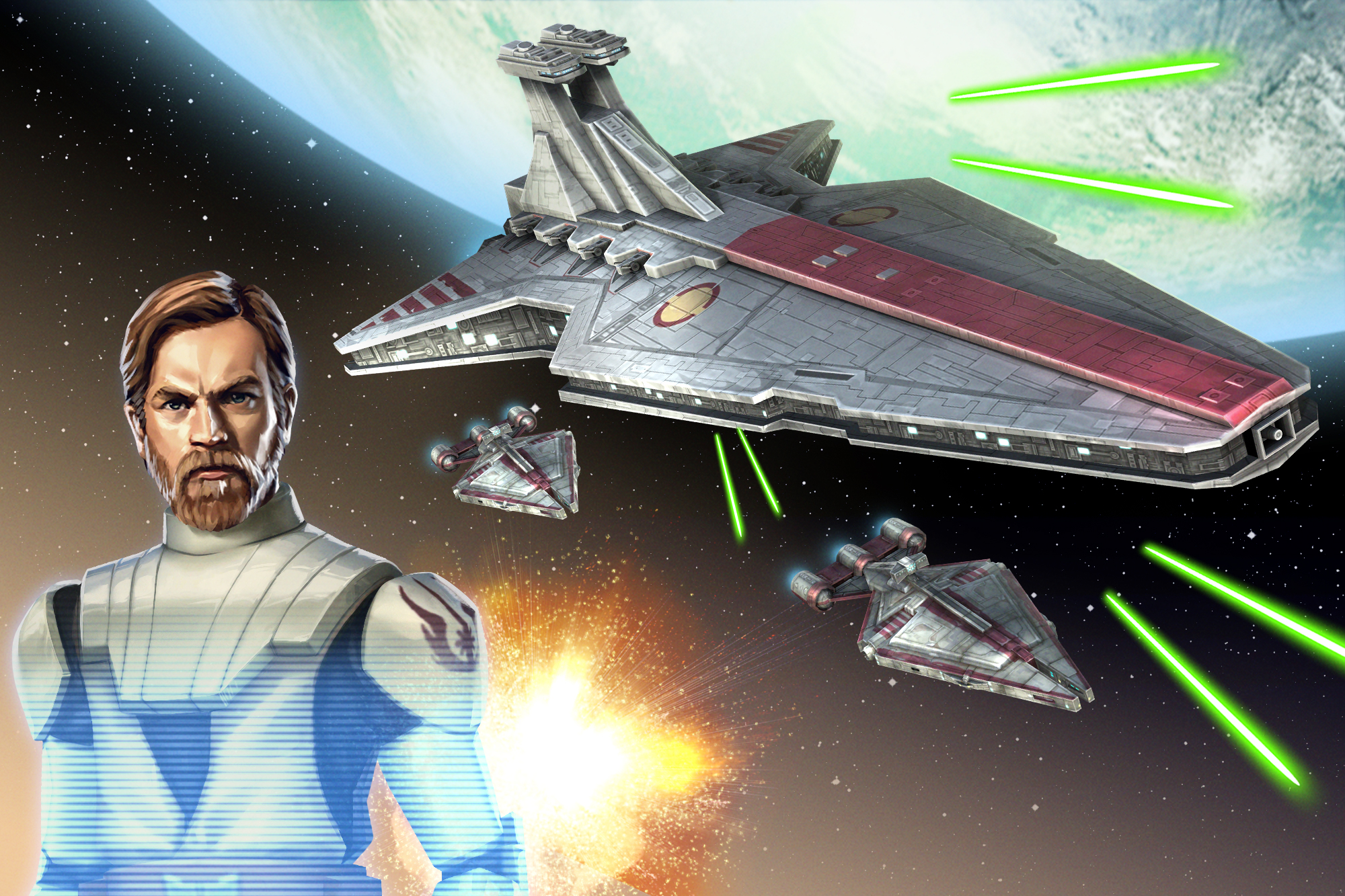 Q: How does that play into your intention for the ship?
A: My goal was to make a Galactic Republic Capital ship that played very different from Endurance. A ton of inspiration came from General Kenobi’s character kit playstyle; and while Negotiator is not in the tank role like the character, the capital ship does care about protecting his allies while playing an offensive role.

Q: Why did we create this ship?
A: Capital ships are like leaders in ship combat, and you can’t field a fleet without one. Because of this, we want to improve the depth of ship combat by giving the player more choices in fleets and the ability to field multiple fleets at the same time for Grand Arenas and Territory Wars. It also was important to create a memorable reward for the Geonosian Territory Battle that tied in thematically to our awesome Clone Wars content.

Q: What should we know about this character that we may not notice at first glance?
A: Two important points to consider when using Negotiator: First, keeping Valor up at all times is key to the sustained firepower that you need to finish off a match. Second, Concussion Mines deal damage but also can daze opponents. When used in combination with Mobilize (Special 2) which also inflicts Daze, can buy you the time you need against heavy assist teams like the Home One with Han’s Millennium Falcon.