Designer CG_Mandellorian is back to talk with me about the difficulties of creating the largest capital ship in the game and what strategies we should consider when utilizing the ship in battle. Charge the Mega-ion cannon and let’s get this started! 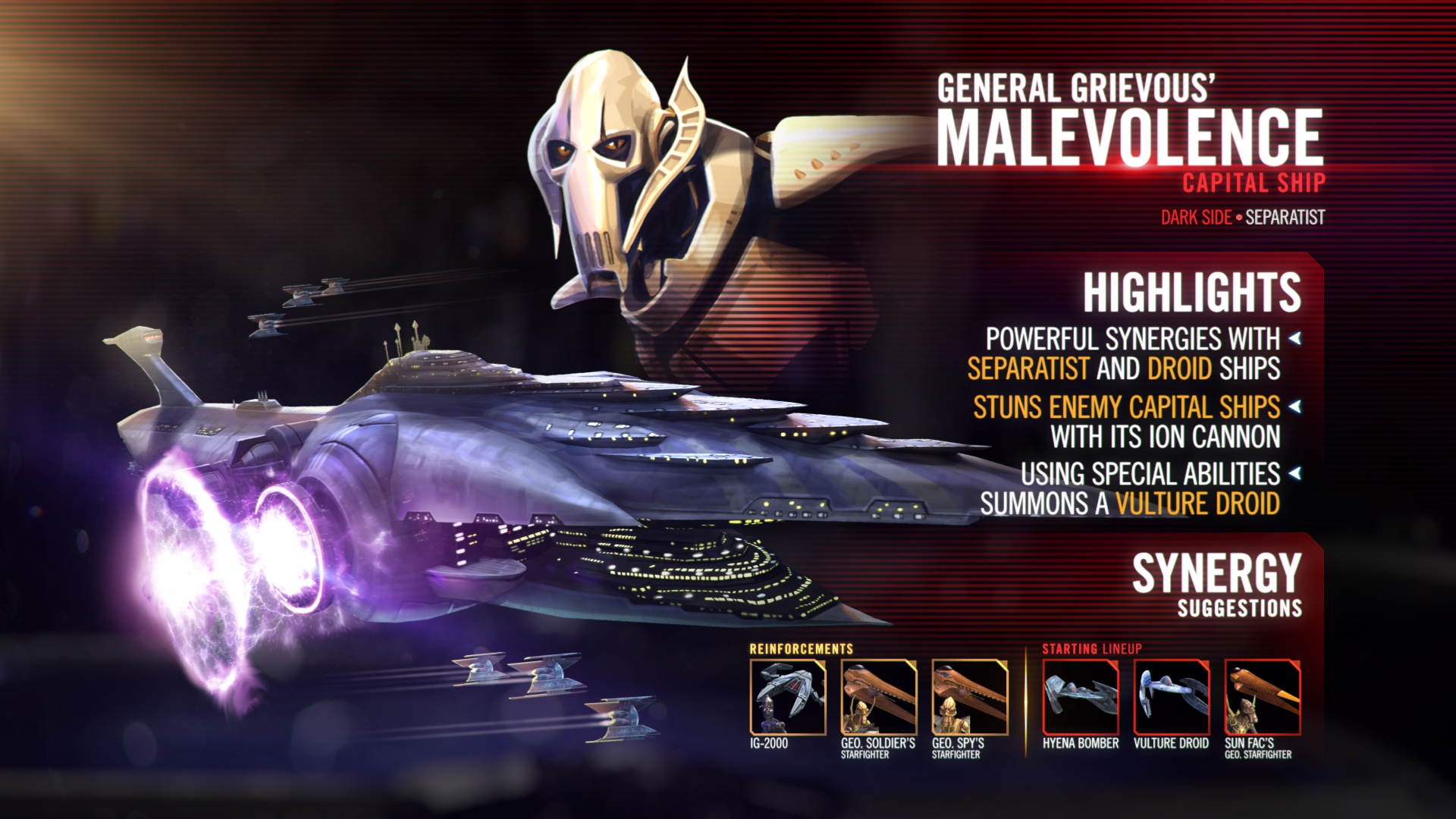 Q: What is the Malevolence?
CG_M: Malevolence is a massive Subjugator-class heavy cruiser used by General Grievous as his flagship in Clone Wars tv show during the Malevolence arc of episodes. Right at the start of the series, the Separatists use their super weapon to terrorize the galaxy and control where the Republic can engage them. It’s built around a massive ion cannon that can disable whole fleets in a single blast.

Q: Why did we bring this character to the holotables now?
CG_M: We initially envisioned this ship to launch with Separatist Might but as we got closer to release, there weren’t many ships that could support it and actually make a useful fleet. We already had the Vulture Droid and the Hyena Bomber in the pipeline for development so we decided to push it out until the light side launched and use the Negotiator for the dark side version instead.

Q: Where did you get inspiration for the kit?
CG_M: I was incredibly excited to finally be able to work on a capital ship for the Separatists and there were a bunch of fun options to choose from. We considered Nute’s Droid Donut modified Lucrehulk-class LH-3210 cargo freighter or the Invisible Hand from the movies but neither of those ships did much on screen. Malevolence actually got some battle time in the TV show and so we had some references for what actually firing the guns looked like and how it was used strategically. It turns out, Malevolence was the one that the most effective ships we saw from the Separatists in terms of on-screen action. Take a look at the first few episodes of Clone Wars if you want to see it decimating many Republic ships before finally being taken down.

Q: Why makes this ship interesting and unique?
CG_M: This capital ship is all about Vulture Droids and synergizing with swarms of these ships. Whenever you use any capital ship special abilities, it summons a special version of the Vulture Droid into any open slot. This obviously creates a whole lot of Vultures throughout the battle. Bring your own playable Vulture Droid and then enemy is going to be fighting waves and waves of fragile attackers. Finally, don’t forget that Vulture Droids have a chance to assist when attacking Buzz Droid inflicted enemies. This means you can bring to bear an incredible amount of firepower with a fleet full of Vulture Droids.

The Ultimate ability is also fairly unique and can dramatically shift the tide of battle in your favor.

Q: Let’s talk more about the Ultimate ability, how does it work?
CG_M: Well, first off its the Mega-ion cannon on the side of the ship. In the show, Grievous wrecks pretty much everything in his path with it, including many of his own droids but I don’t think he’s ever too torn up about their sacrifice. It’s visually very impressive whenever it fires and one of the coolest ships in the game in my opinion.

The Ultimate can stun an enemy capital ship, which makes the enemy capital ship skip a turn for the first time ever, so it’s very important you pick the right moment to use it, if you want to use it well. It also disables all enemy shields, i.e. removes protection, which felt very thematic for an ion cannon.

Q: This ship is huge! Was it visually hard to add to the game?
CG_M: I really wanted to make this ship but I had to do some serious convincing with our Art team to do something so large. It’s at a scale that no other ship in the game comes close to and there’s few ships that rival its scale in the Star Wars Universe in general. We have played with the scaling of ships and units in the past to fit into a battle but it made things very difficult to work with in the future so ended up keeping it close to the correct size. I laughed out loud when we first put it in the game, it was so big it broke our UI in most places and dominated any screen it was on. You couldn’t even place some ships or tap on half the buttons. I almost wish we left it that way so you’d know how amazingly huge this ship actually is.

Q: What is your strategy in battle for this ship? It doesn’t seem like defense is its strong suit.
CG_M: I’d suggested Overcharge as a solid opener. You need the damage and keeping Overcharge online is critical to enabling enough damage to quickly finish off the enemy. I’d highly recommend dispelling Overcharge before it gets out of control if you are facing down Malevolence. A Vulture Droid with 5 stacks of Overcharge is very scary and can demolish whole fleets in a couple turns if you aren’t careful.

Also, don’t be afraid to let the Vulture Droids get destroyed, each time this happens it gives Malevolence additional turn meter and you are just going to summon more anyways!

Q: Did we make any other changes to other Separatists ships in preparation for Malevolence?
CG_M: There were a few slight changes to other ships that would fit well into this fleet. The Geonosian ships and IG-2000 received damage boosts to make this fleet hit with the big boys and be on par with today’s meta but there were no mechanical changes at this time.


Q: Anything you might miss before you go?
CG_M: Vulture droids that are summoned will flee if there are no other ships from your fleet so make sure they are not the only ships you have left. Once again, the chance to assist on Buzz Droid inflicted enemies is a big deal and can absolutely smash the strongest ships if left unattended.


Q: Wait, one last thing. What about the Soulless One? Is it coming to the game too?
CG_M: No, unfortunately we made the Soulless One specifically for the Clash on Kamino event. It would be interesting for a pilot to fit into multiple ships but we would need some additional tech to make it work smoothly so I’ll leave it at, “we have no plans at this time.”