The Mandalorian Kit Idea (Quotes are the only spoilers; only through Episodes 1-4)

TheRealCaloNord
32 posts Member
December 8, 2019 12:40AM edited January 17
Normally with my kit ideas, I have an opening statement, however, the mandalorian only requires a very short one. I was thinking he would be a legendary character. He's just SO epic. He could also be a raid character. He is meant to be Meta, and should pound Malek's face in (lovingly). I worked so hard on this oh my goodness. This kit has been edited due to very great criticism from @Ichiraikou, thanks man!

This is the way. 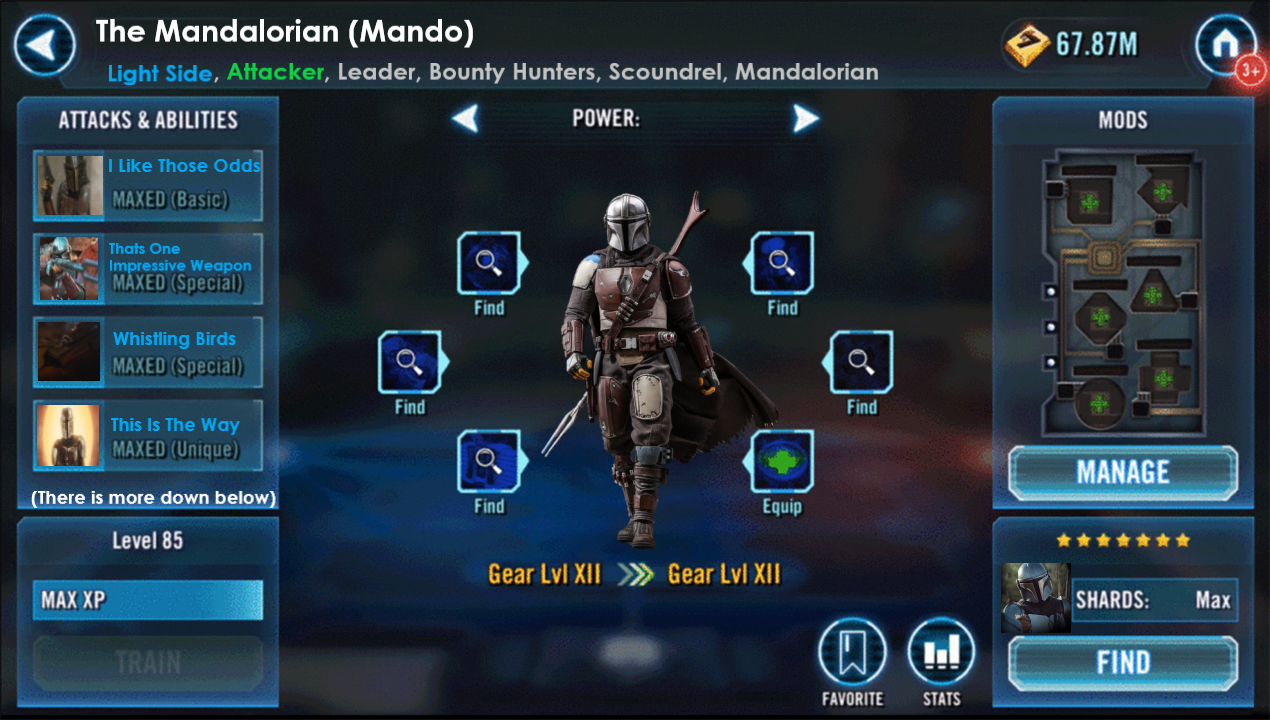 The Mandolorian (Mando)
Light Side, Attacker, Leader, Bounty Hunters, Scoundrel (+possible Mandalorian tag?)
A quick thinker and empathetic Mandalorian make for an exceptional leader with impeccable aim, able to land stuns swiftly to surprise the enemy.
BASIC - I Like Those Odds
Deal Physical Damage to target enemy and inflict Ability Block and Speed Down for 1 Turn. Gain 15% Turn Meter and deal 15% more damage for each defeated Ally. If there are more active enemies than active allies, this attack can't be Evaded or Resisted."

SPECIAL - That's One Impressive Weapon Cooldown - 3
Deal Special Damage to target enemy and Inflict Stun and Shock for 2 turns. If this attack defeats an enemy, the cooldown of this attack is reset, and all enemies lose 25% Turn Meter.

SPECIAL - Whistling Birds Cooldown - 3
Deal Special damage to a random enemy. Repeat this 4 additional times. Inflict Stagger and Ability Block on each damaged enemy for 2 turns. For each enemy hit more than once, Inflict Stun for 1 turn on those enemies and remove 20% Turn Meter from all enemies.

Whenever an ally falls below 100% Health, all allies gain 20% Turn Meter, 20% Bonus Protection, and Advantage for 2 turns. These effects can't be Prevented.
At the start of each encounter, The Mandalorian (Mando) takes a bonus turn and gains a new special ability if he is in the leader position, Protect At All Costs:

Target ally gains the buff "Protected" until The Madalorian is defeated. Protected: This Unit is immune to Taunt, Marked and Deathmark, and cannot be targeted until The Mandalorian (Mando) is defeated. This ability cannot be dispelled or prevented and can only be used once per encounter.
Contract:
Deal 15 debuffs to the enemy team and hit a debuffed enemy 15 times. (Only Bounty Hunter allies can contribute to the Contract.)

Reward:
All Bounter Hunter allies gain Bonus Protection equal to 50% of their Max Protection, which cannot be dispelled or prevented and their Payouts are activated.

UNIQUE - Beskar Steel (ZETA)
The Mandalorian (Mando) has +30% Max Protection and recovers 10% of his Max Protection every time he scores a critical hit.

At the beginning of the battle, The Mandalorian gains Critical Hit Immunity which cannot be dispelled or prevented and The Mandalorian (Mando) cannot lose health while he has protection.

UNIQUE - I Have Spoken
Any time The Mandalorian or a Mandalorian ally defeats an enemy, they gain +25% Max Protection (stacking), recover 100% protection and gain Mandalorian's Resolve until he is defeated.

Mandalorian's Resolve: This unit is immune to Tenacity Down and Turn Meter Reduction. Additionally, enemies cannot gain health when attacking a unit with this buff. Can't be Dispelled, prevented, or stacked.