StarbirdInferno2
70 posts Member
September 15, 2020 10:56PM edited January 2021
For a long time I've wanted the Ravager to come to SWGOH, so as a side project I had a go at making a kit for the capital ship. I also added a new sith ship the 'Mark VI Surpremecy-class Starfighter' as a new addition. This capital ship's purpose is to provide a home for the Sith empire ships, as well as unused sith ships like Maul's Scimitar, and to be a formidable force. A huge thanks to 'LukeTheDeathTrooper' on Discord and @Ichiraikou on the forums for helping out with improvements, so I hope you like the finished version. I tried to implement parts of Nihilus's kit so it would fit the theme, and I also tried to fit a mixture of offense and defense into the capital ship's kit. 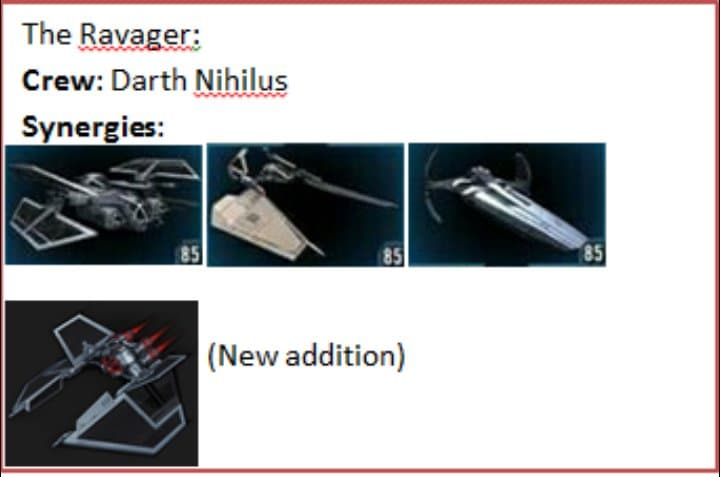 Supportive capital ship that drains enemy life, and uses it to strengthen its allies.

Dark lord of the sith (Leadership)

All Sith and Sith Empire allies gain 10% offense, +25% Potency, +25% Max health and +50% Health steal. Whenever a sith ally lands a debuff on an enemy they inflict damage over time for 2 turns, which can’t be resisted. Each time a damage over time lands on an enemy, the Ravager gains 5% turn meter.

Reinforcement bonus Offense up for 2 turns

Strength of the void (Special, cooldown – 3)

Dispel all debuffs from all allies and all allies recover 15% health and 15% protection. Also Summon a sith fighter, who’s stats are halved from the ship unit, and grant sith allies the following buffs:

Now for the new ship. This starfighter brings some bonuses to Sith allies, as well as an extra damage dealer for the fleet while also having anti Jedi synergy. 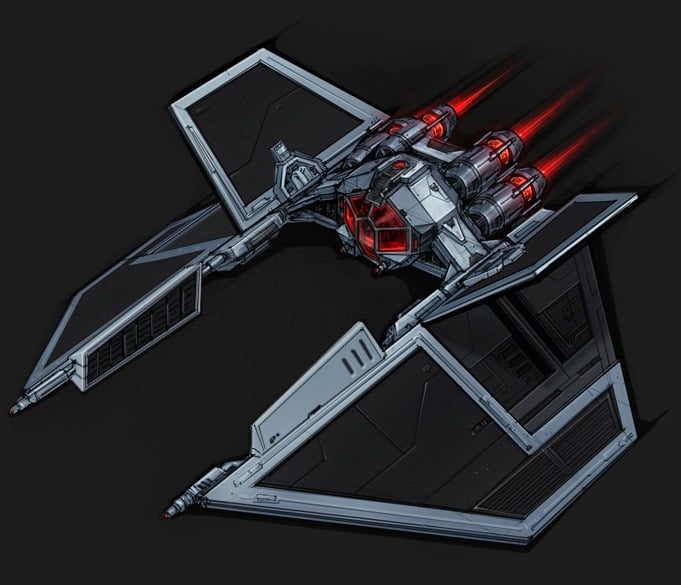 Deal Physical damage to all enemies, remove 30% Turn Meter from them, and inflict Speed Down on them for 2 turns. Call a random other ally to assist, dealing 15% more damage.

Spearhead of the sith fleet (Unique)

The mark VI Starfighter has +20 Speed and +15% Accuracy, sith allies gain half these amounts. The mark VI Starfighter ignores taunts, and whenever another sith ally falls below 50% health they gain Stealth for 2 turns. All sith allies deal 20% more damage to Jedi enemies. While the mark VI is active, Sith fighters gain +15% max health at the start of each of their turns (Stacking) until the end of the battle.

Enter battle: Mark VI inflicts marked on the strongest enemy for 3 turns, which can't be resisted, and all enemies lose 15% turn meter.

I hope you liked the finished version.
Post edited by StarbirdInferno2 on January 2021
6