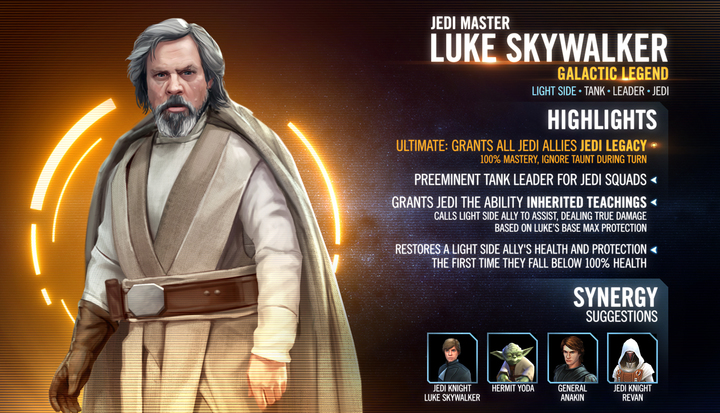 The second group of Galactic Legends launches this week and we kick off the Developer Insights with one of the most iconic characters in Star Wars, Jedi Master Luke Skywalker! Both of these new Galactic Legends have the unique ability to change into their Ultimate form and lay waste to their enemies.


The Basics:
Unique Attributes: Inspiration:
This version of Luke explores his journey in The Last Jedi. By using the Transformation tech, we are able to not just mimic the Force Projection he does in the movie, but expand upon it.
While a reluctant teacher in TLJ, we wanted to lean into his time as a Master with Jedi Lessons, Inherited Teachings, and ultimately Jedi Legacy.
Though we don’t get to see Luke Skywalker use his powers too often in TLJ, the “Final Form” Luke Skywalker is worthy of Galactic Legend status.
One of our goals was to create a Jedi Leader ability that rivaled Jedi Knight Revan and was flexible enough to allow for a diverse set of Jedi squadmates.
The final tiers in the event contain some unexpected allies: the three Jedi who appeared to Luke after the destruction of the second Death Star, and his final student, Rey (Jedi Training) will fight alongside Luke on Crait.