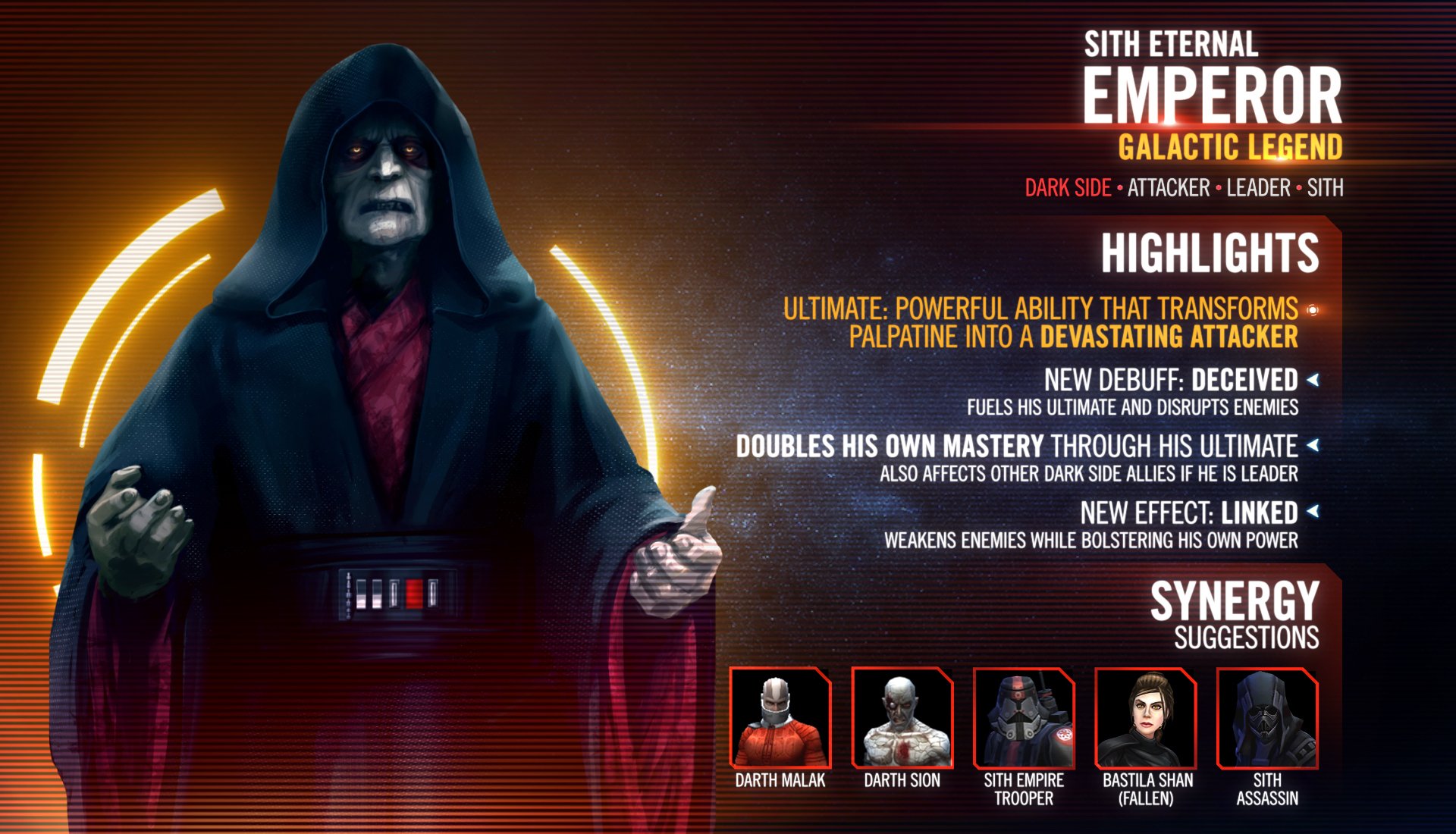 UNIT NAME: Sith Eternal Emperor
ALIGNMENT: Dark
CATEGORIES: Dark Side, Attacker, Leader, Galactic Legend, Sith
Cunning Emperor of the Sith that eliminates his enemies with the overwhelming power of the Dark Side

FINAL TEXT: Deal Special damage to target enemy. If that enemy wasn't Deceived, they become Deceived for 2 turns, increased to 3 turns if they are a Jedi. Deceived can't be copied, dispelled, or resisted. Sith Eternal Emperor gains Speed Up for 2 turns. This ability can't be countered.

FINAL TEXT: Dark Side allies gain Retribution for 3 turns, and Dark Side Tank allies gain Taunt for 2 turns. Remove Linked from all enemies. Then, target enemy becomes Linked until a Linked enemy is defeated or until the end of encounter. Sith Eternal Emperor gains the granted ability Entwined Fate and takes a bonus turn.

During this bonus turn, Sith Eternal Emperor may only use Entwined Fate, can't be ability blocked, ignores taunt effects, and may not target a Linked character.

Linked: This character is Linked

Entwined Fate: Target enemy becomes Linked. This ability is removed and can't be used again until Unraveled Destiny is used.

Whenever a Sith ally is defeated, dispel all debuffs on other Sith allies and they recover 100% Health and Protection. Sith allies can't be revived, and they ignore defense when targeting a Jedi enemy.

At the start of each Linked enemy's turn, Linked enemies lose 20% Max Protection, quadrupled for Jedi, and Sith Eternal Emperor gains 25% of the amount lost. Linked raid bosses instead gain Expose for 2 turns, which can't be resisted.

Ultimate: I Am All The Sith (Must charge to 100% before use)

When Sith Eternal Emperor transforms, he loses the abilities Deception and So Be It, Jedi and gains two new abilities.

[Basic] Revitalized Shock: Deal Special damage to target enemy and inflict Shock for 2 turns, which can't be copied or dispelled. This attack deals 150% more damage to Deceived Light Side enemies. If the target was already Deceived, reduce the cooldown of Power! Unlimited Power! by 1 for each Deceived enemy. This attack can't be evaded.