Somehow 501st clones are dying under GAS Advance stance, and it's something to do with 5s sacrifice unique. Once that happens, a bunch of other undefined stuff happens.

I managed to get a recording of it which illustrates the problem(s).

In Brief: After enrage, one of the clones will die when Nihilus does the Drain Force ability, despite GAS being in advance stance. It should be IMPOSSIBLE for a clone to be defeated while GAS is in Advance (even annihilate shouldn't be able to target them). 5s will then sacrifice. but he will not die, probably because GAS is in advance stance. The team gets his extra stats, and 5s keeps taking turns. If you try to use the Unbreakable Will shield on 5s, he'll just swallow it, but he'll be targeted by the next annihilate and will then die.

In the video (link at the bottom), here are the interesting parts.

0:25: we're in enrage time, and ARC (right) and Rex (2nd left) are low on health, echo (2nd right) has full health but no protection, and 5s (left) has full health and protection. GAS is in Advance, so "Other 501st allies can't lose health". Or can they?
0:27: Nihilus takes a turn, calls the minions, and then does Drain Force. There are counter-attacks.
0:32: Immediately after this, Rex and Arc magically have full health, and they and echo all have 60-ish% protection. 5s loses all his protection. He has clearly sacrificed, since the others have had their stats boosted. This means Arc or Rex (or both) was defeated by Nihilus.

This should not happen. A unit is defeated when health reaches zero. When GAS is in Advance, "Other 501st allies can't lose health".

0:35: 5s has sacrificed, but it is his turn. Cool. This actually makes some sense, once you accept that the above bug has happened...his health is at 100%, because he can't lose health. However, he doesn't like being alive after sacrificing. He starts twitching before every turn, as if he's taking invisible damage.

2:03 Nihilus is about to drain and get annihilate off cooldown, and 5s has a shield available. When the shield is activated, it immediately disappears.

2:21 Nihilus takes his turn. He does Drain Force, which reduces the cooldown of Annihilate. He gets ready to wind up, and only sees taunt on GAS, because that shield was swallowed by 5s. But he targets 5s. 5s is defeated.

So the shield kept the taunt alive, but it did not keep 5s alive. Unbreakable Will: Can't be reduced below 1 health. But he was.

The mechanics of that shield, and annihilate, and tactical awareness - they are not playing nicely with one another. 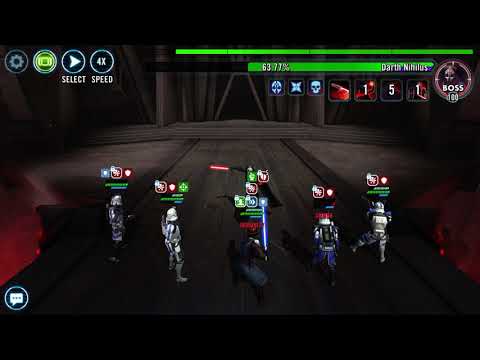