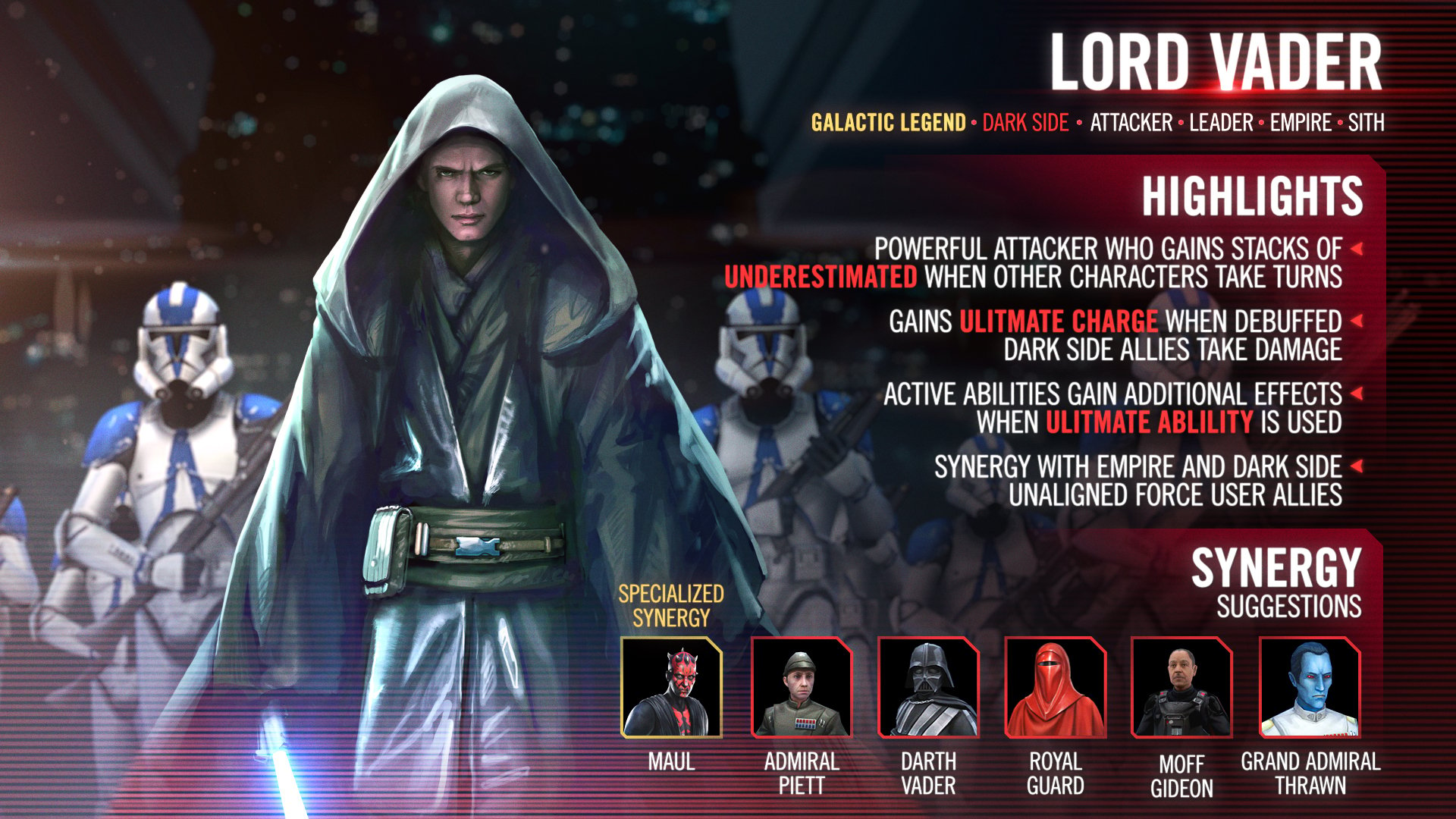 UNIT NAME: Lord Vader
ALIGNMENT: Dark Side
CATEGORIES: Galactic Legend, Dark Side, Attacker, Leader, Empire, Sith
Legendary Sith Lord who utilizes the actions of others to empower his own potential and is not to be underestimated.

Ultimate Charge: Lord Vader gains Ultimate Charge when he uses Dark Harbinger and when debuffed Dark Side allies receive damage he gains 2% Ultimate Charge, increased to 3% if that ally was an Unaligned Force User.

Lord Vader gains 50% of other Dark Side allies' current Mastery (stacking) until the end of the encounter, then they lose that much. Empire and Dark Side Unaligned Force User allies don't lose Mastery from this ability.

If 100% Ultimate Charge was used, Lord Vader instead gains 75% Mastery from this ability, dispels all debuffs on himself, takes a bonus turn, reduces his cooldowns by 1, and gains Ashes of the Republic for 5 turns, which can't be copied, dispelled, or prevented.

FINAL TEXT: (ZETA) Deal Physical damage to target enemy and if Lord Vader has 30 or more stacks of Underestimated, he deals damage again. Each time this ability deals damage in the same attack, it deals 25% more damage (max 50%).

Ashes of the Republic: This attack also deals true damage.

FINAL TEXT: (ZETA) Deal Physical damage to all enemies and inflict Daze and 4 Damage Over Time effects for 2 turns, which can't be resisted. For each stack of Underestimated, this ability deals 2.5% more damage, and all Dark Side allies gain 1% Mastery (stacking) until the end of the encounter.

Ashes of the Republic: Inflict Ability Block for 1 turn which can't be dispelled or resisted, and increase target enemy's cooldowns by 2.

While Empire and Dark Side Unaligned Force User allies are at certain Health thresholds, they gain different benefits.

Unique: TWISTED PROPHECY
FINAL TEXT: (ZETA) Lord Vader is immune to Turn Meter manipulation and his attacks can't be evaded. At the start of battle he loses all Protection and gains that much Max Health, and Dark Side Unaligned Force User allies gain Speed Up and Stealth for 2 turns.

At the start of each other character's turn Lord Vader gains 1 stack of Underestimated (max: 60), doubled for Galactic Republic and Jedi enemies.

This unit has +10% Max Health and Max Protection per Relic Amplifier level, and damage they receive is decreased by 30%.
6