Besides the main project of acquiring C3PO, I did a small side-track and tried to unlock BB-8. If you want to watch a video, instead of reading then here is the link: 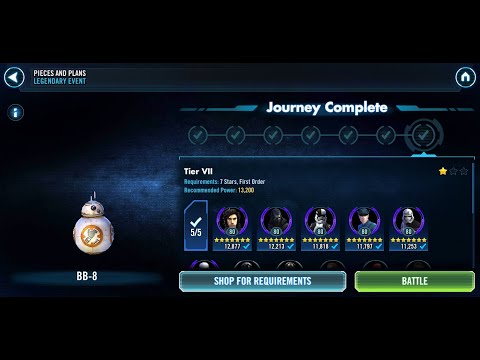 So let"s start the guide, first with the characters.

They are all the 'basic' toons that you can acquire, easier than the Pilots or Hux.

You can see that none of my toons are Level 85, only 80, though you will need the 7 stars for all of them.

So Kylo Ren Unmasked: Lvl 80, Gear 8. You can get him from Cantina and one hard node.

All of the abilities are level 7, no omegas, and 2 sets of Defense set and 1 set of Health. Try to put as much Defense on him as possible.

Kylo Ren: Lvl 80, Gear 8. Abilities lvl 7. Cantina and Guild Store. Use Crit Ch and Crit Dam on him. As much damage as possible. You can use offense too with offense primaries.

First Order Executioner: Lvl 80, Gear 8, Abilities lvl7. Only acquirable through the Cantina, so it will take some time to get him. He is your best damage dealer in this squad, so put Crit Ch. Crit Dam. or offense, but buff him up as high as you can.

First Order Officer: Lvl 80, Gear 8, Abs. lvl7. Tough farm, acquirable through the Cantina SHOP so farm KRU or FOX and with the coins, buy the FOO. For FOO, the main point is to make him really fast. A speed set with a speed arrow and a health or defense set would be nice.

Captain Phasma. Lvl80, Gear 8, Abilities: mainly 5 for me, not even 6 for all. Put 2 sets of Potency on her and a health, Potency cross. Her only goal is to apply Speed Down debuff. You can get her easily from the Galactic War shop, no big deal.

Let's see the fight itself.

I needed 2 tries, for the first one, I immediately lost KRU because of Vet. Smuggler Chewie, so if you want a successful fight, stun the wookie. 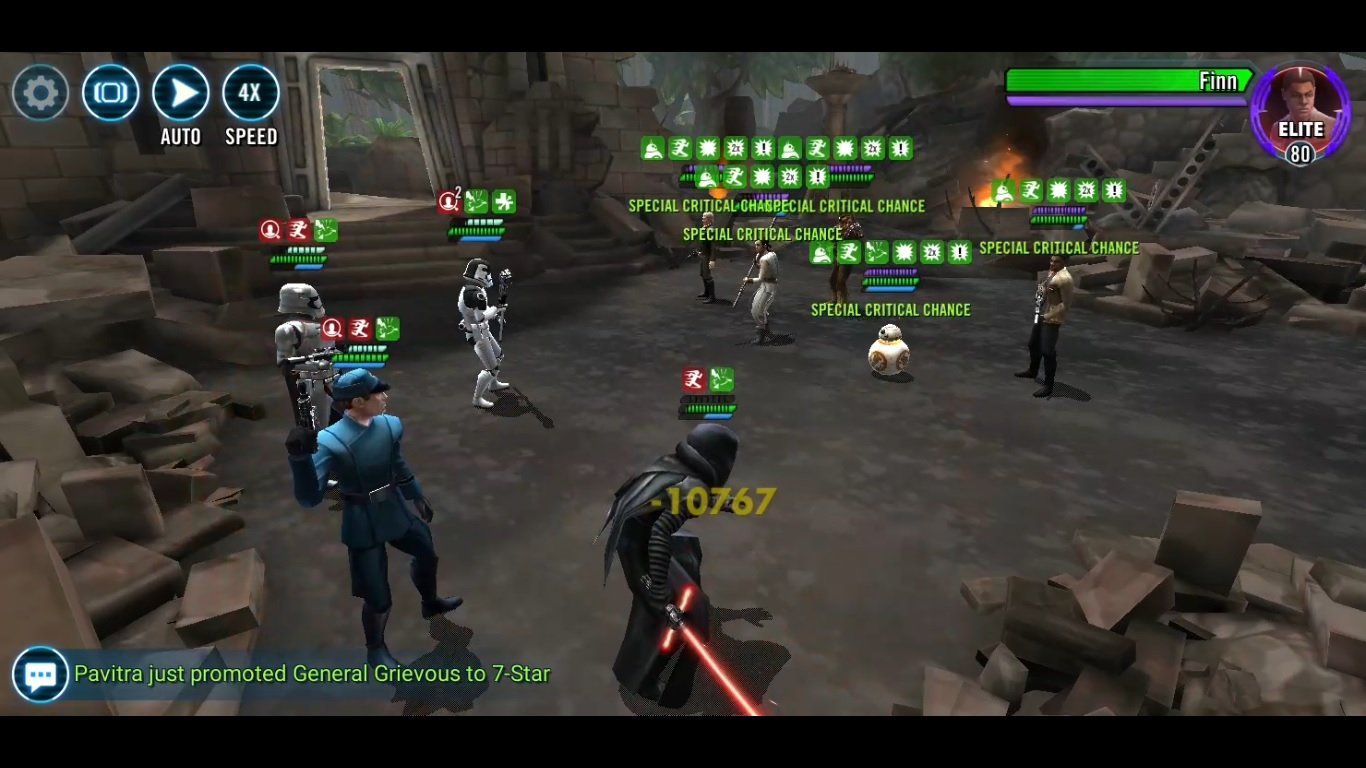 Illuminated Destiny on everyone, killed KRU - there is just no point in the fight anymore. 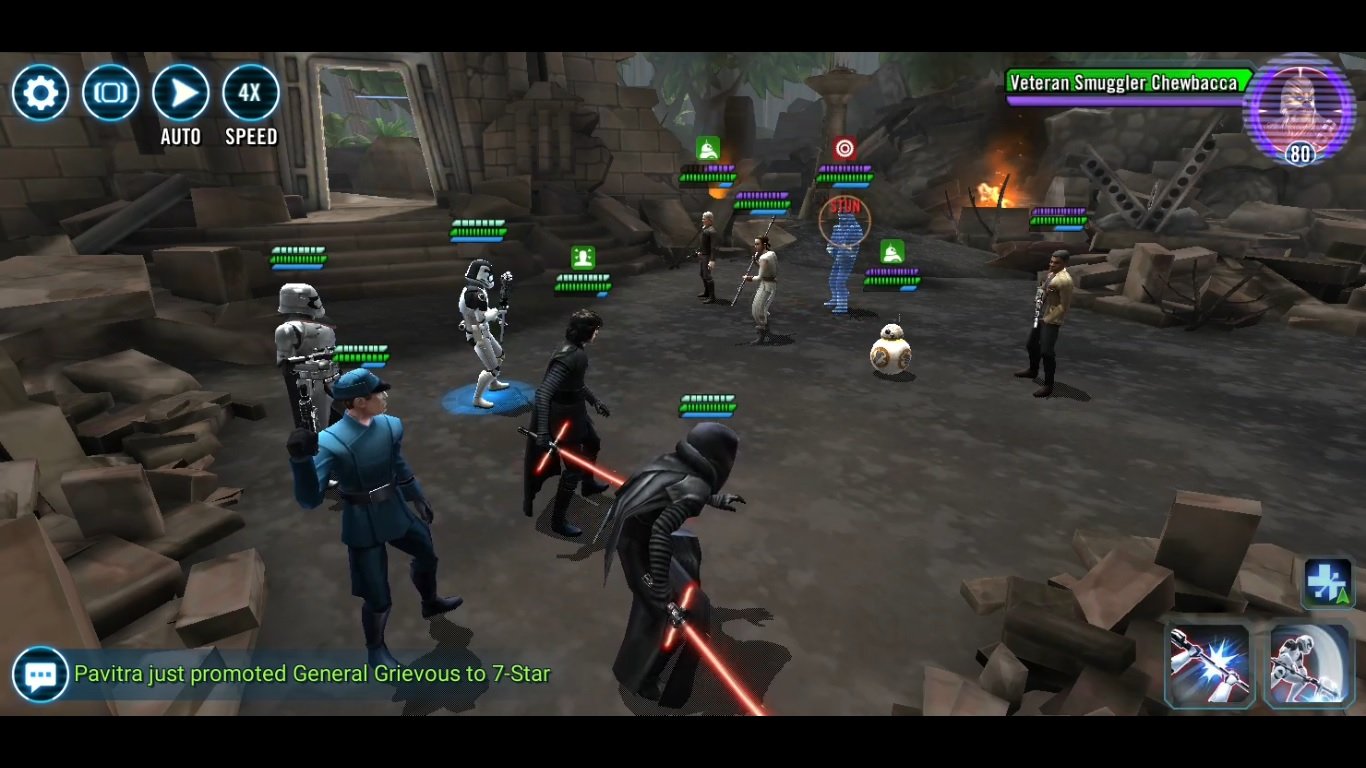 Stun the wookie with KRU, and before that, you can reduce TM with the FOO, Rey, BB8 or Han. I reduced Han's TM, he can dish out stun and a huge chunk of damage too. 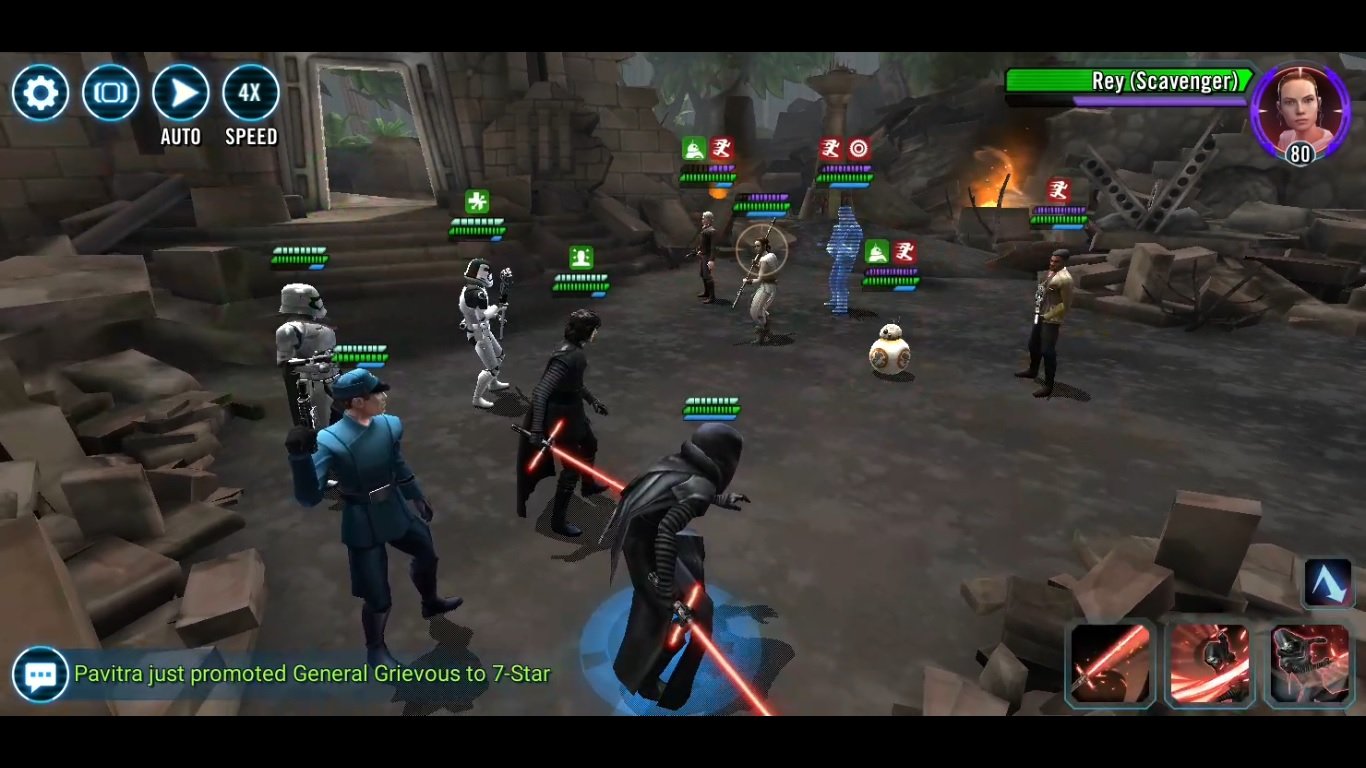 Apply speed down debuff with Phasma! 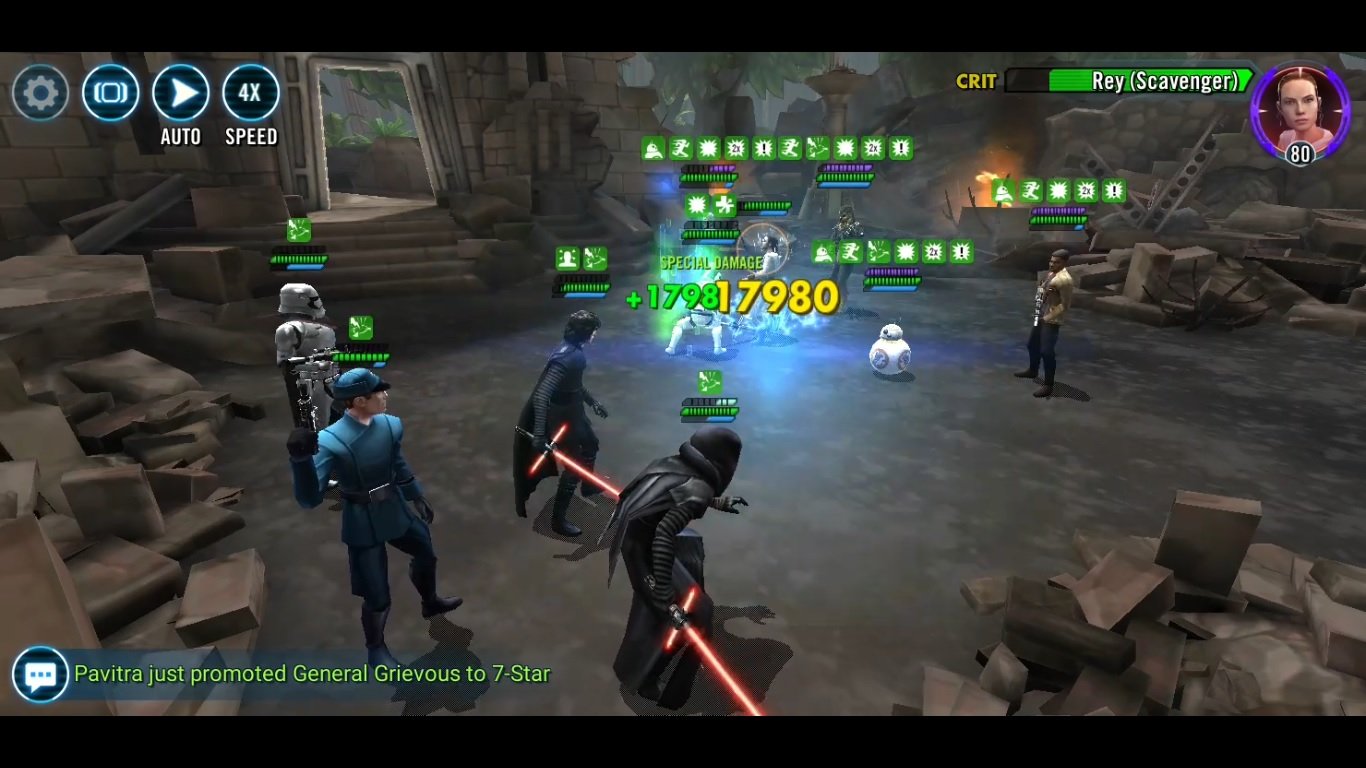 BB8 will apply I.Destiny no matter what. It takes some RNG for you to survive, but if you do, then you can use your FOX's special ability to debuff it from one toon. I chose Rey, she does big damage, but you can do otherwise (Chewie or Han). 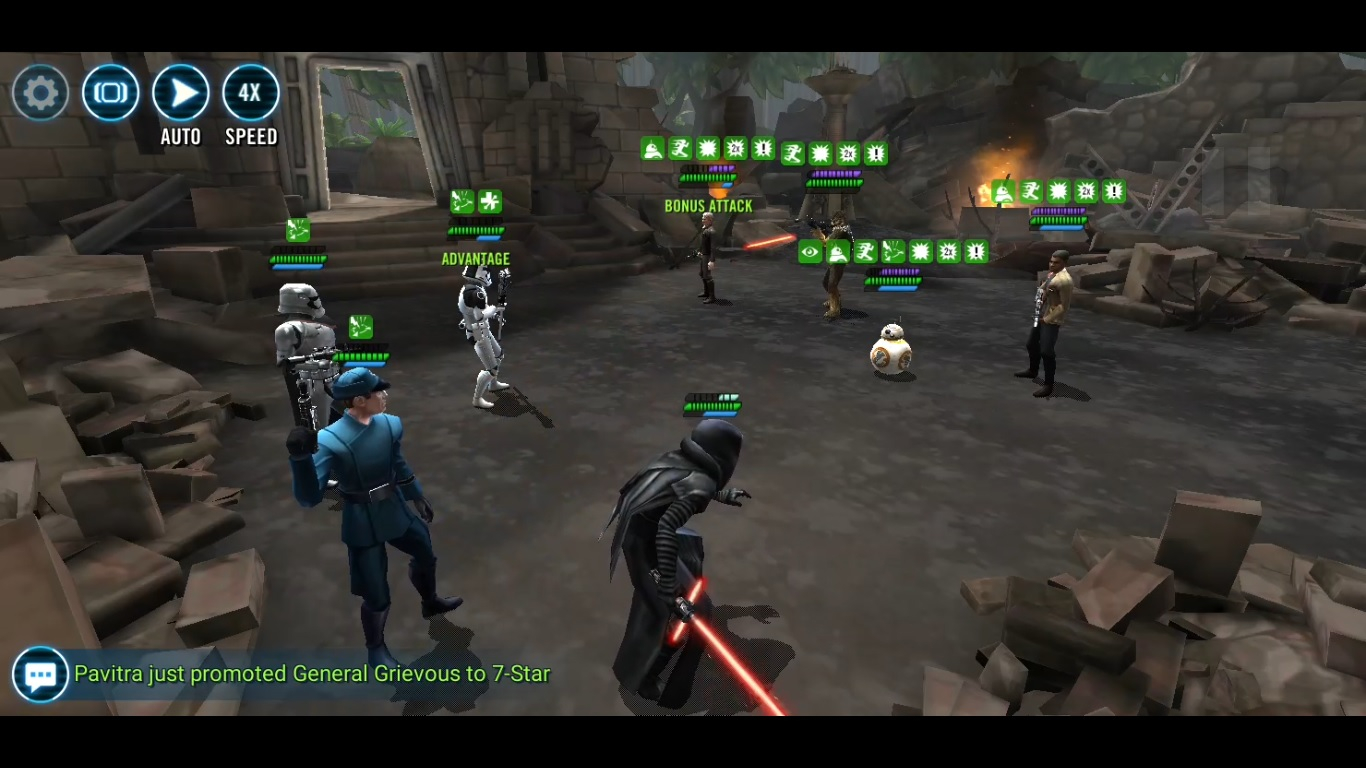 I have just killed Rey, and then KRU dies too. It is okey...of course, it would be better to have KRU, but 1-1 loss is okey. So after Rey, you can go after the other damage dealers. 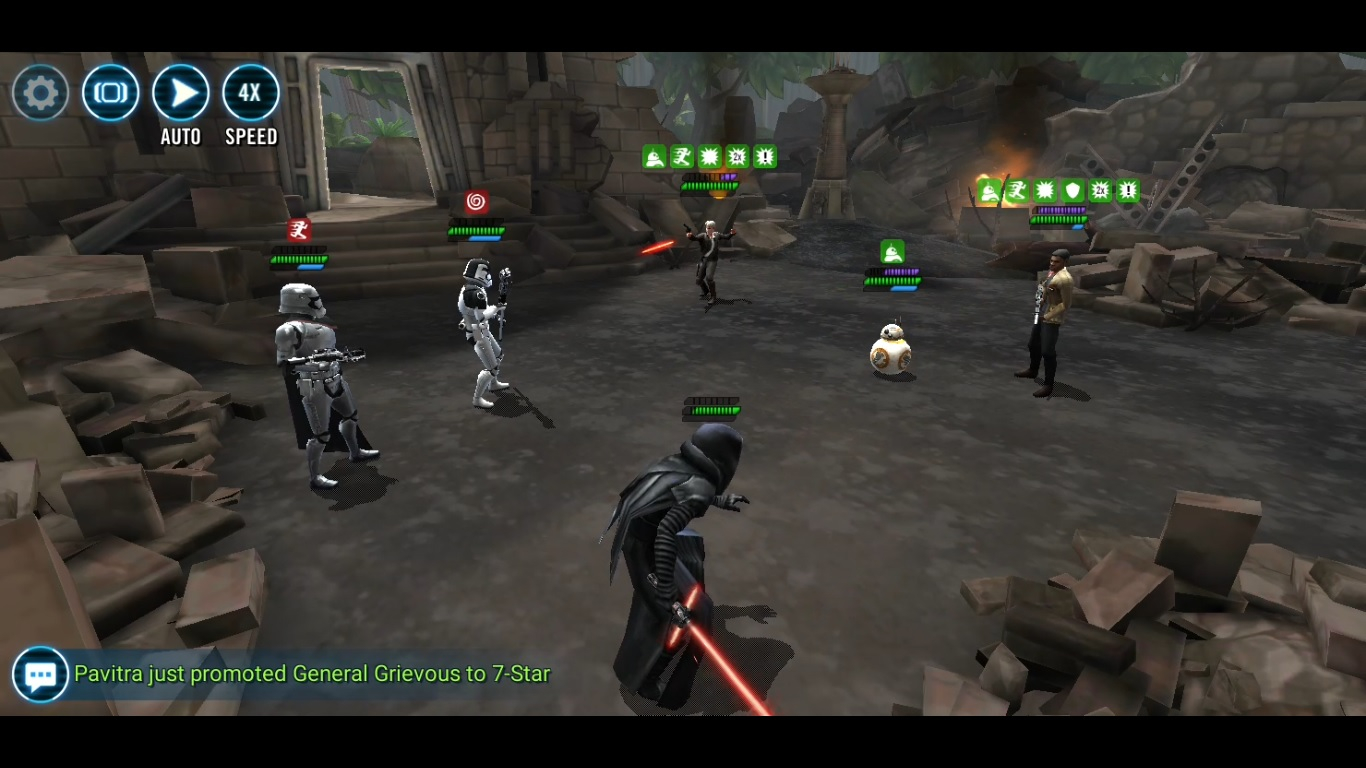 After some turns, your FOO will be beaten to death by Chewie, so focus on him and dish out some damage with your Kylo's Special. Kill him, then go after Han. Nice, Han is dead also, Finn and BB8 is the line that we have to follow from here on. 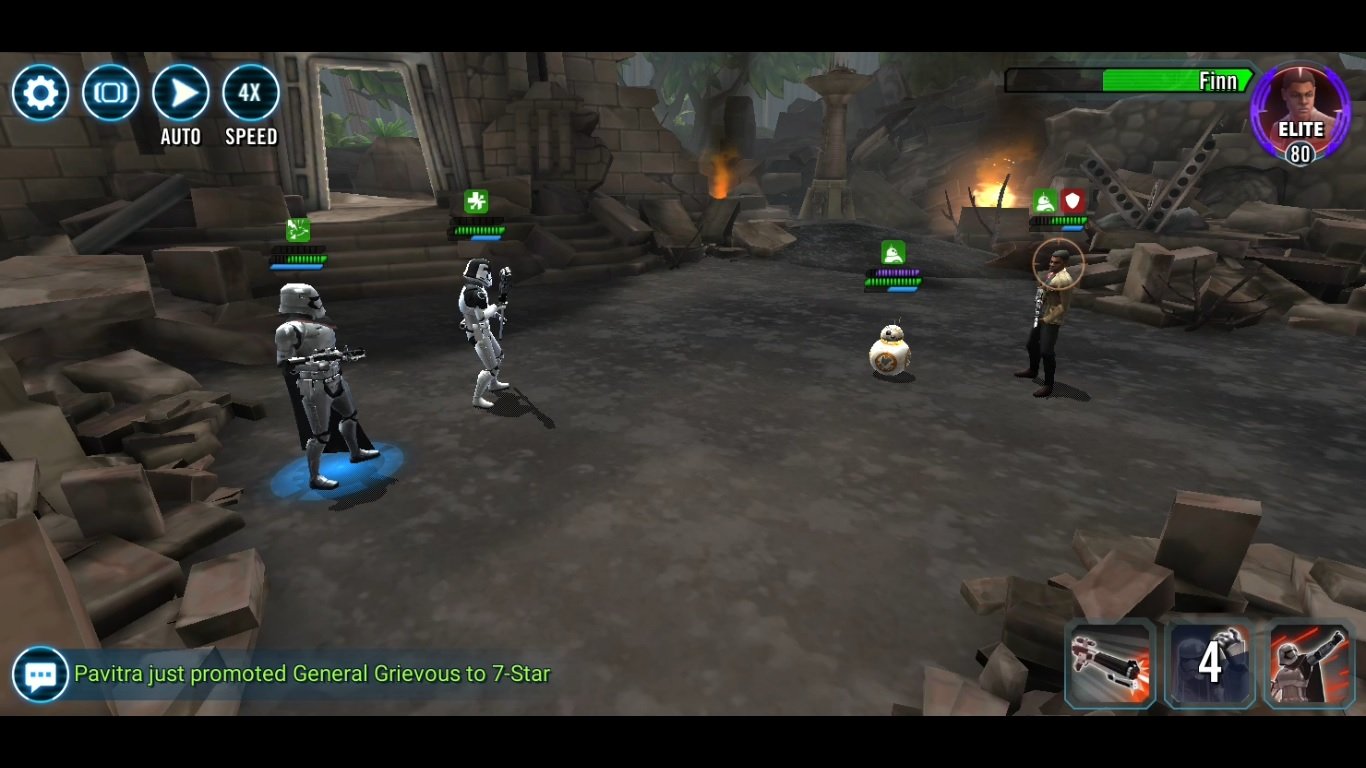 Kylo dies because of BB8 or Finn. But that is okey, because Kylo should strip the protection from Finn, and the FOX can kill him later. 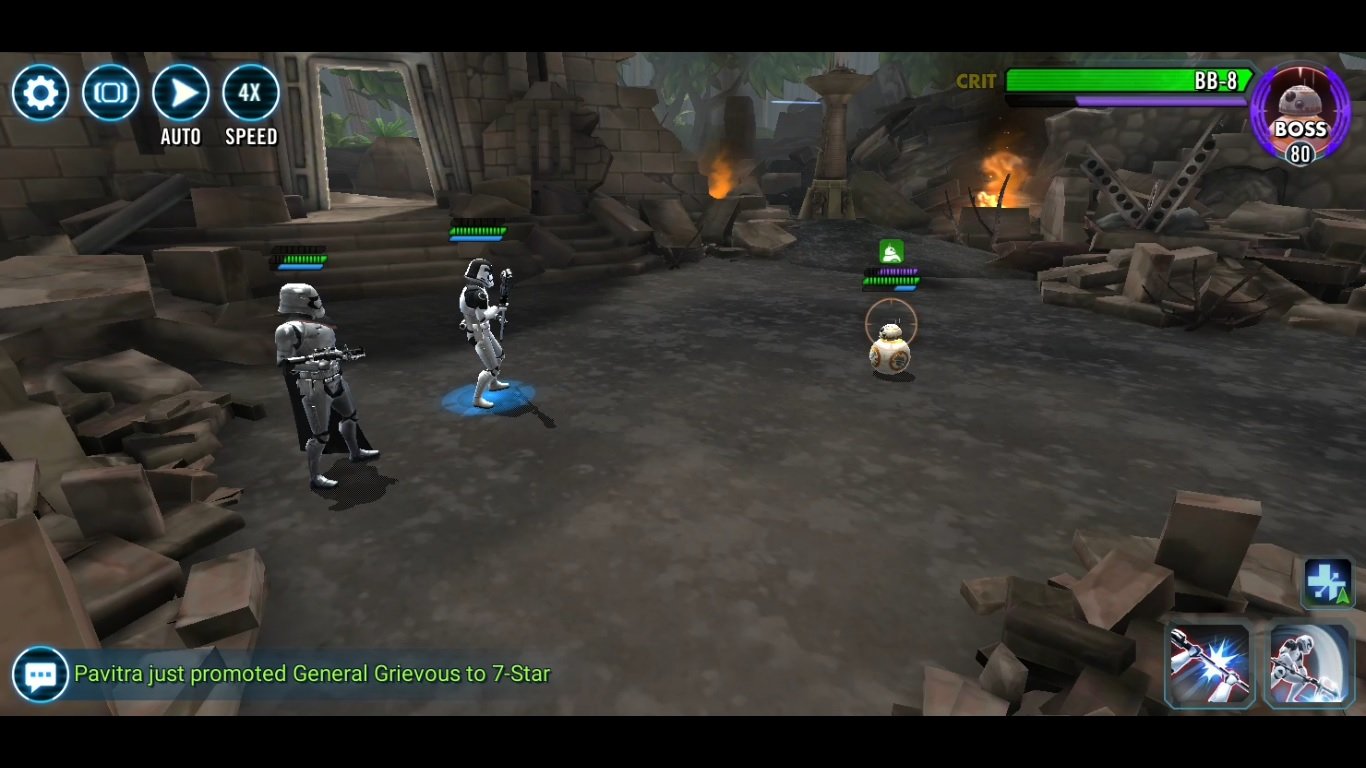 2 against one, but BB8 will kill Phasma in some turns so that will be 1 on 1 at the end. 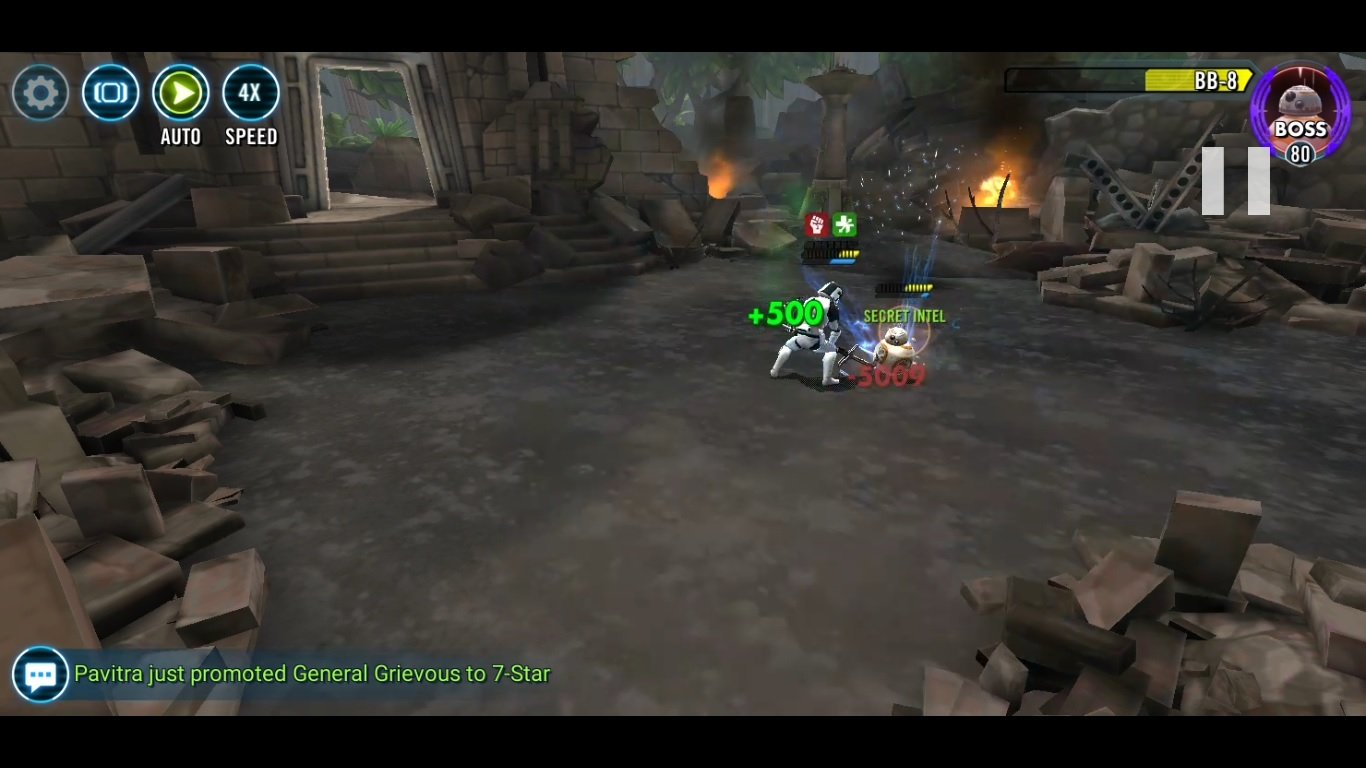 This will go one, but with a little help from the RNGod, FOX will prevail. 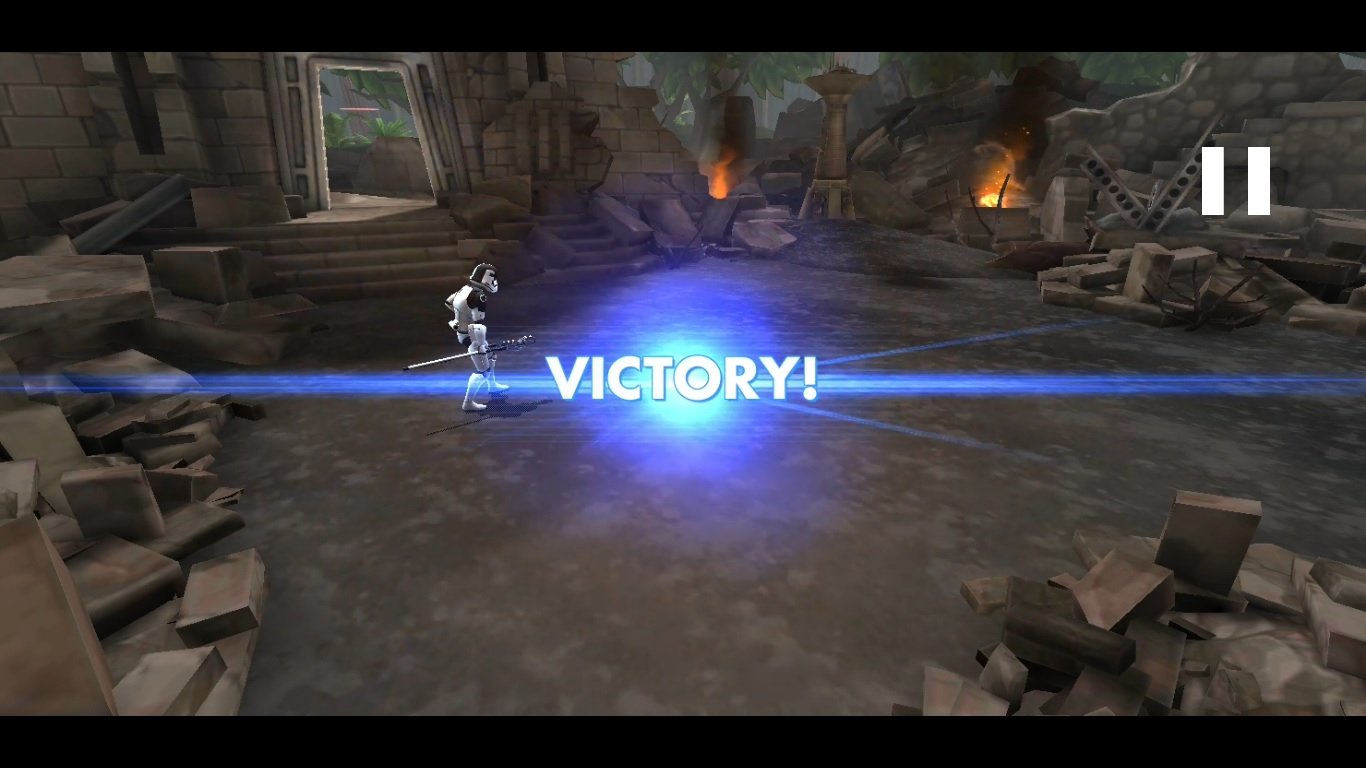 Aaaand with this, you will have your 7* BB-8 with such a low requirement, that is really easy to attain. If you want, of course you can pump your guys higher, and replace Phasma with the Stormtrooper. It would be a better team with him. Though if not, then you can move on to your next Legendary.

Thank you for reading, and for my next guide, I will bring you C3PO ( yes I know, the Millenium Falcon takes so much time, that I will do that a little bit later....)