Today’s update brings Fennec Shand, the notorious Bounty Hunter and assassin, to the holotables! You can add Fennec to your roster via the all new Marquee Event, “Tales From The Outer Rim VII.”

For a limited time, Commander Ahsoka Tano shards will be added to all Light Side Hard nodes as bonus drops. During this event, this character's drop rate on each node has been scaled to Energy.

Light Side Battle Hard nodes will be rewarding bonus drops on 10/23.

Staying on the theme of additive drops, the players have voted and results are in! For a limited time the Malevolence - winner of the Galactic Chase forum poll - will be added to all Light Side Battle nodes as bonus drops. During this event, this ship's drop rate on each node will be scaled to Energy.
Light Side Battles are rewarding bonus drops from 10/8 through 10/14.

The Conquest Sector 5 feat "Marked for Death" has been removed. In its place is the new feat, "One by One." 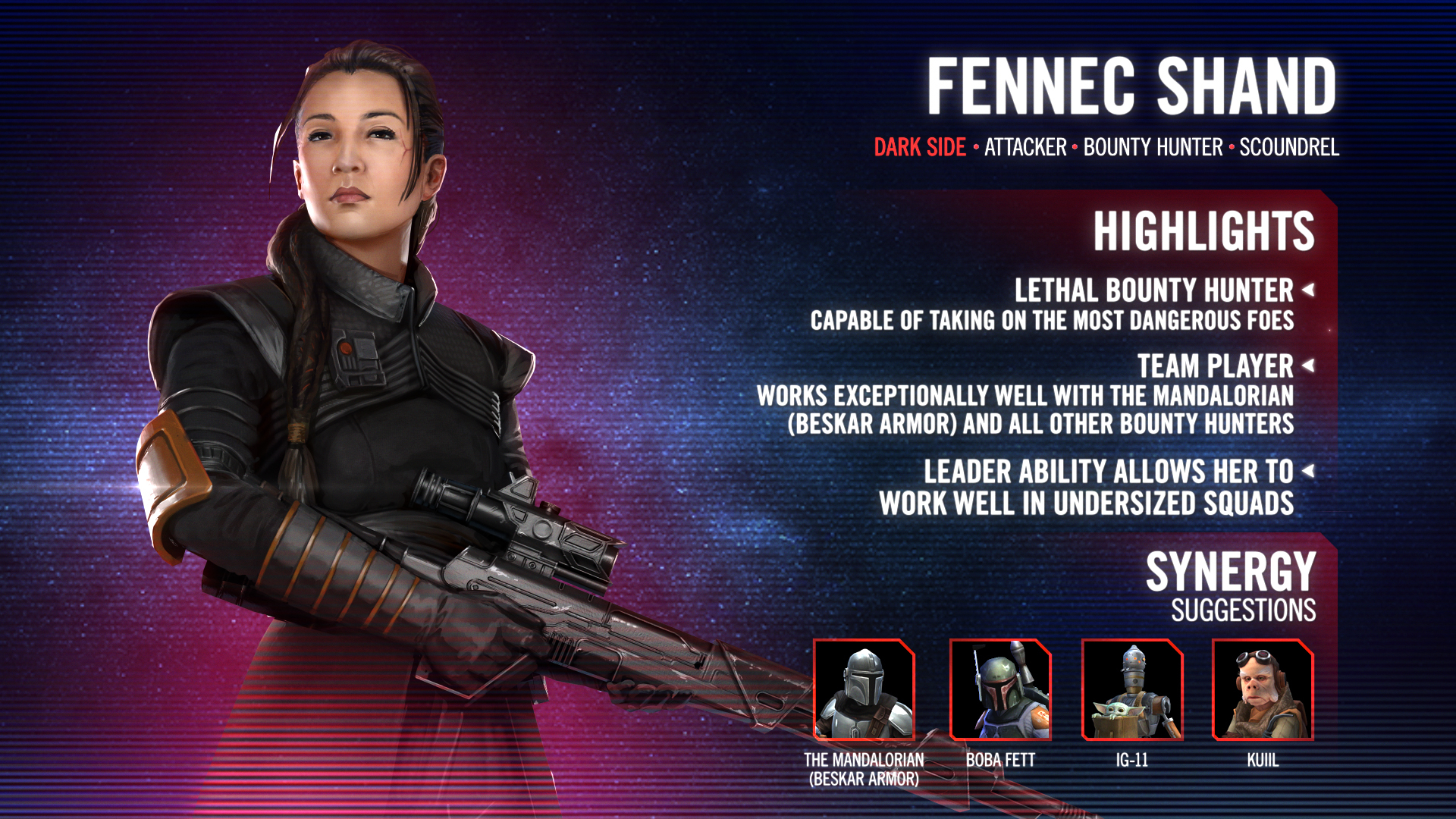 EVENTS
TALES FROM THE OUTER RIM VII
Fennec Shand is an assassin and Bounty Hunter who always gets her mark. Learn to use Fennec's abilities against the holotable's most fearsome foes in this all new Marquee Event!
FIXES

EMIR OF RYLOTH BUNDLE
Wat Tambor shards are available for a limited-time! Don't miss out on this offer which also includes Geonosian shards.

Power up your Separatists with this limited-time offer containing up to 40 Shards for Wat Tambor and up to 80 Shards for Geonosian Soldier, Geonosian Spy, Geonosian Brood Alpha, Sun Fac, and Poggle the Lesser!

This bundle contains 6 cards, with each card assigned to a unit as specified below.


FENNEC SHAND ELITE MERCENARY BUNDLE
One of the galaxy's top assassins, Fennec Shand, is available in the Store! Pick up this bundle for a big boost to this Bounty Hunter and Scoundrel assassin! Each bundle includes 30 shards for Fennec Shand, including materials to power her up to:
Character Level: 40
Gear Level: V

KNOWN ISSUES
[*] EVENT - In Tier 2 of the Lord Vader Event, Obi-Wan Kenobi is not displayed properly in certain cinematic sequences on devices with 4:3 display.

Other General Known Issues can be found on the Development Tracker here.