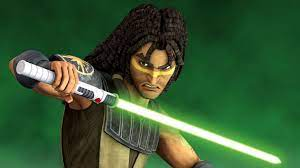 Description : A Great Support Jedi, but a Better Bounty Hunter who works well with Asajj Ventress (Bounty Hunter), and has great unblockable moves, as well as gets better with debuffs on everyone.

Basic : Lightsaber n' Shots - Omega - Level 8
Description : Deal Physical Damage to target enemy twice. This attack has a 50% chance to stun the target and a 50% chance to inflict Evasion Down for 2 turns. This move can't be resisted.

Without Zeta :
Inflict 2 DOTs and Critical Damage Down on all allies and enemies for 3 turns.

CONTRACT :
Using Bounty Hunters, grant your allies a debuff a total of 15 times.

REWARD : Every time an ally or this character gains a debuff (does not matter how many debuffs), gain 1% Accuracy stacking (cap of 40%).

CONTRACT : Using Bounty Hunters, grant your allies a debuff a total of 10 times.

REWARD : Every time an ally or this character gains a debuff (does not matter how many debuffs), gain 1% Accuracy stacking (cap of 60%).


Unique : I'll follow Asajj - Omega - Level 8
Quinlin Vos gains 15% Counter Chance and 5% Evasion, both increased by 3% for every debuff, with a cap of 100%. These affects are shared with Asajj Ventress (Bounty Hunter) if both units are active.

Payout - Quinlin Vos's Payout - Omega - Level 3
Quinlin Vos gains stealth for two turns at the end of every other turn and whenever stealth expires he gains foresight for 2 turns. 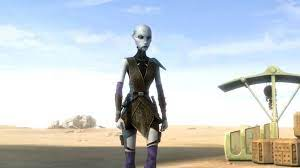 Description : A great Tank Bounty Hunter with her partner Quinlin Vos, she has powerful regenerative powers, and gains different powers depending on what she's facing.

CONTRACT : Using Bounty Hunters, deal damage to light or dark side enemies with the opposite (light attacks dark, dark attacks light, dark does not attack dark and light does not attack light) 15 times.

REWARD : All Payouts are activated. Bounty Hunter recover 3% health and 6% protection at the end of every turn.

Unique : I'll Follow Quinlin - Omega - Level 8
Assaj Ventress (Bounty Hunter) Gains 10% Offense and 5% Lifesteal, both increased by 5% for every active dark or light side unit on both teams, with a cap of 100%. These effects are shared with Quinlin Vos is both units are active.


Thank you for reading the first two of my Original Bounty Hunters, Quinlin Vos and Assaj Ventress, who work well as a tag team, similar to Chaze or Zaalbar and Mission.

Please tell me of any spelling mistakes, wrong slang, improvement or nerfs I should do to the units, or any other problem with these two charecters.

*Debuff Immunity : Made up buff : Makes it so any debuff expires instantly upon placement. Damage over time is the only debuff to still work, along with debuffs like ferocity. Buff unique to Asajj.