We are excited to celebrate the 50th anniversary of Lucasfilm with five characters from Star Wars Legends. These units will be released in a series of four Marquee events and culminating in a special Legacy event for Starkiller! The first unit required for Starkiller’s Legacy event is Dash Rendar.


This Scoundrel might be best known for the hefty 19-96 Kinetic Absorption Panels on his shoulders but Dash has done everything from training to be an officer at the Imperial Academy when he was younger to becoming a master pilot while exploring the Outer Rim of the galaxy to even helping the Rebellion overthrow the Empire.

As a Scoundrel leader, Dash enhances his squad when they have the Prepared buff. His Leader ability, Prepared for Anything, grants his Scoundrel allies additional bonuses based on their role while they have Prepared, and while in Grand Arena Championships, this ability allows allies to immediately regain Prepared if they lose it.

Unlock Dash Rendar in the new Marquee event, Shadows Of The Empire, and prepare for the culmination of our 50th anniversary celebration, Starkiller's upcoming Legacy event!

You can find Dash Rendar’s kit preview here and the Developer Insights for more information on this character.

Legacy Events & Starkiller
Legacy events are a new special kind of event focused on units from Legends. Only 4 units are required to complete the event but those 4 units will need to be at least Relic 5 to enter the event. Each of the required units will have a Marquee event where you earn character shards like normal but there is also a special additional Legacy Tier that awards Omicrons for those that have the Marquee character at 5 star. These units will not follow the traditional cadence for character releases.

Starkiller’s event will be available permanently in the Journey Guide starting December 15th. 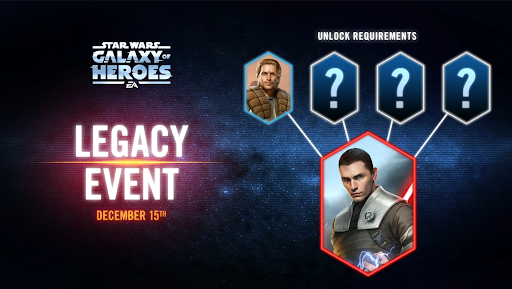