In addition to our own anniversary, Galaxy of Heroes is also celebrating the 50th anniversary of Lucasfilm with tons of exciting events, new characters from Legends, and awesome gifts! Today’s Update brings the renowned scoundrel Dash Rendar to the holotables, along with Omicron updates for Rose Tico and Captain Phasma! Not to mention the Double Drops and the Anniversary inbox!

This Content Update coincides with a Minor Title Update that began rolling out yesterday. You will need to get the latest version from your app store to see all the latest changes.

NEWS
Anniversary Gifts
Get ready to check your inbox for a new player Portrait and Title in celebration of our 6th anniversary! There’s a big inbox with a ton of goodies as well so make sure to log in and claim it November 21st. Read more about it in the October Road Ahead. 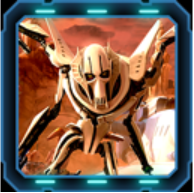 Double Drops
Double Drops are happening all around the Cantina in celebration of Star Wars: Galaxy of Heroes' 6th Anniversary.
CHARACTERS AND SHIPS

Marquee Event: Shadows of the Empire
Play as the scoundrel of legend, Dash Rendar, and learn what it means to be prepared for any situation. Unlock Dash Rendar in the Marquee event and grow the power of your collection!

General Known Issues can be found on the Development Tracker here.

HYPERDRIVE BUNDLE
As part of Galaxy of Heroes’ Lucasfilm 50th anniversary celebration, the Hyperdrive Bundle is half off for a limited time!

NOTE: In a recent forum post, we stated players who purchased the Hyperdrive Bundle November 8th or 9th (the two days prior to the announcement of the bundle going on sale) will receive the difference between price in Crystals at a later date. We will now also be including players who purchased the Hyperdrive Bundle between November 10th and today's release as part of the pool of players who will receive the price difference in Crystals.

DASH RENDAR MARQUEE BUNDLE
The Corellian Smuggler Bundle featuring Dash Rendar shards is coming soon. Add Dash Rendar, one of the few scoundrels to ever attempt to break Han Solo's record for the Kessel Run, to your squad!


DASH RENDAR MARQUEE PACK
The Corellian Smuggler Pack featuring Dash Rendar shards is coming soon. Each pack guarantees at least 5 shards for Dash Rendar and may drop up to 330 SHARDS!