Unlock Padme 7* - why these toons?

This is Zsoltee's Journey Guide - I return to the forum with my newly unlocked Padmé 7*. In this discussion, I will show you how I unlocked her and why did I use these toons. Also, the gear levels, abilities, and mods will be explained.

If you do not want to read too much then check the following video: 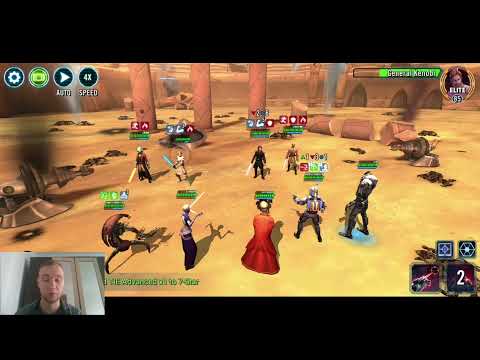 Though if you have the time, then continue reading on.

So after JTR, the next toons on my list was Padmé, as I was able to upgrade GK (General Kenobi) to 7* - thanks to my CLS - JTR duo teams who can grab me the first place in the AAT Raid (I can solo it with these two teams) -, and with him, my Padmé team can be complete. So let's see the team.

Jango Fett - Gear level 12 - all abilities upgraded to Omega - leader and unique lvl7. No need for Zeta. For the mods - Crit Damage and Crit Chance. I use Potency cross and Crit Dam triangle, Speed cross.

Nute Gunray - G11 - Maxed abilities - leader lvl 7. It is extremely important that he should be the leader, mostly because of the speed and potency bonus, and Jango Fett's damage immunity which activates immediately (the leader must be a separatist for this). Mods: Speed and Potency set. Speed Arrow, Potency cross, whatever for triangle - health would be good.

Asajj Ventress - G11 - same abilities - rampage is super good but no need for this event. I put Cr. Chance and Dam. on her. Speed or Offense arrow, Cr Dam triangle, and Offense cross.

B2 Super Battle Droid - relentless barrage - useful, but no need to zeta (only later on...). Mods - Full potency set (3 sets of Potency). Arrow can be crit avoidance, triangle health, cross potency. It should have high potency for the appliance of buff immunities on the enemy team.

Droideka - G11 - max abilities, no need for zeta. Mods - Offense and Health set. Be aware that you should avoid any kind of speed on Droideka. Offense must be chosen over Crit. Dam, because Droideka cannot do critical damage - twin blaster cannons (true damage).

I am aware that a GG (General Grievous) team would be better for this event, but Jango is a really good addendum to the Bounty Hunter team too, while the Droideka, Asajj, and B2 are a must for the GAS event later. In this sense, this team is time- and cost-effective for the later stages. Nute Gunray is not part of this event, though he can be used in a GG team too. Asajj can be used for a NS (Nightsister) squad if you are opting for that one. B1 is a must for the GAS too, though that toon is a difficult one to obtain, so in this sense, B1 is not time-cost effective, though you will need B1 later (can be obtained through a hard ship node - 5-B).

I do not recommend Geos and Count Dooku, although they are good too. Geo team is super useful and difficult to beat, but the whole team is time-consuming to build, and cannot be used for the GAS event. Dooku is good too, but he is not part of the GG droid team. You can build him later if you insist...

Nute Gunray lead. Use the B2 to dispel the buffs, the droideka's true damage to kill Padmé (if not enough, then use Jango's rocket to finish her off). Then focus on GK - put as much extortion on the Jedis as you can. As soon as you can try to kill off the Jedi Master (the guy with the fish head) because he can revive the Jedis. If you can put buff immunity to GK then focus immediately on the fish jedi. Just be aware to do the job quickly, as Jedi Knight Anakin might punish you for your killings. If you do good, then After Padmé, Fish guy, and GK should be dead too. Then you can easily kill JKA with Jango's basic. In the end, execute Mace Windu - and feel the sweet taste of revenge! (if you do not know what I mean then watch the film again). Now, you have Padmé 7*.

Thanks for reading (watching) my guide. If you have any ideas, comments, feel free to add them. It would be a good addendum for the guide if you can comment on your squad and their gear levels-mods.
0
Reply to this topic
Sign In or Register to comment.