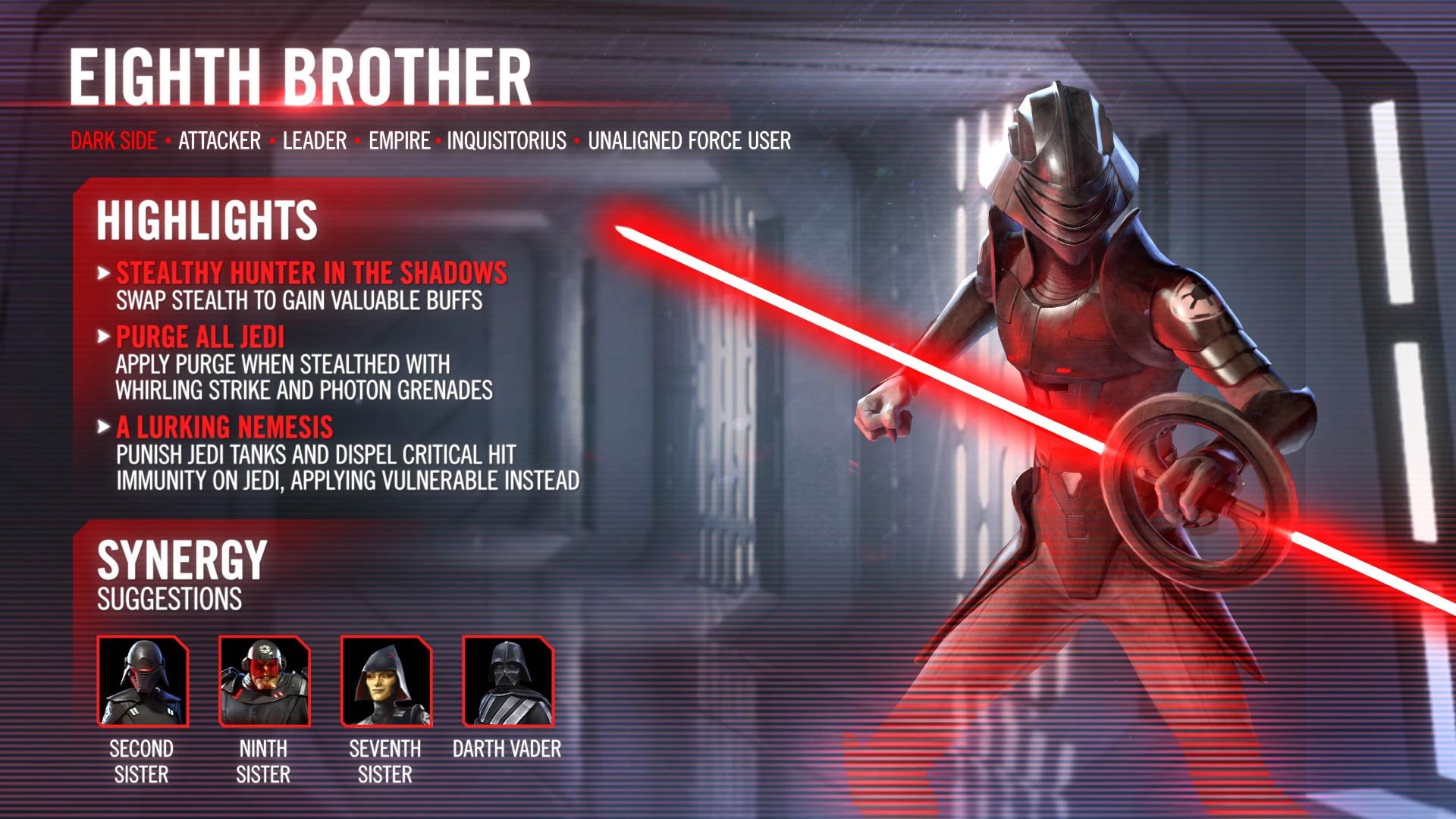 UNIT NAME: Eighth Brother
ALIGNMENT: Dark Side
CATEGORIES: Dark Side, Attacker, Leader, Empire, Inquisitorius, Unaligned Force User
A stealthy member of the Inquisitorious with an arsenal of tricks and weapons to surprise his opponent.

NEW FINAL TEXT: If Eighth Brother did not have Stealth this turn, he gains Stealth for 3 turns. Then, deal Physical damage to target enemy and, if the target is a Jedi, inflict 1 stack of Purge (max: 6) until the end of the encounter, which can't be copied or resisted.

NEW FINAL TEXT: If Eighth Brother did not have Stealth this turn, he gains Stealth for 3 turns. Deal Physical damage to all enemies and inflict Accuracy Down and Burning for 2 turns. Jedi enemies damaged by this ability are instead are inflicted with Blind and Burning for 2 turns, which can't be resisted. This ability deals double damage to enemies who have any stacks of Purge.

These debuffs cannot be resisted by Jedi enemies.

NEW FINAL TEXT (OMICRON): Empire allies have +5% Accuracy and +5% Potency. Inquisitorius allies have an additional +30% Accuracy and +30% Potency. Jedi enemies that gain Foresight from Jedi Unique abilities also gain Blind for 2 turns which can't be evaded or resisted. Whenever other Inquisitorius allies use a Basic ability, they have a 30% chance to inflict a stack of Purge (max 6) until the end of the encounter, which can't be copied, evaded, or resisted.


While in Territory Wars: When Jedi Enemies gain Taunt from Jedi Unique abilities, all enemies take damage equal to 20% of their max Health. This damage cannot defeat enemies. Jedi Enemies that receive Critical Hit Immunity from Jedi Unique Abilities dispel Critical Hit Immunity and instead are inflicted with Vulnerable for 1 turn, which can't be resisted.

Whenever Eighth Brother uses any of his abilities during his turn, if he had Stealth at the beginning of the turn, he loses Stealth and gains Accuracy Up and Potency Up for 2 turns. If that ability was Whirling Strike or Photon Grenades, he inflicts 1 stack of Purge (max 6) on any enemy damaged by that ability.
Post edited by CG_SBCrumb on March 23
6