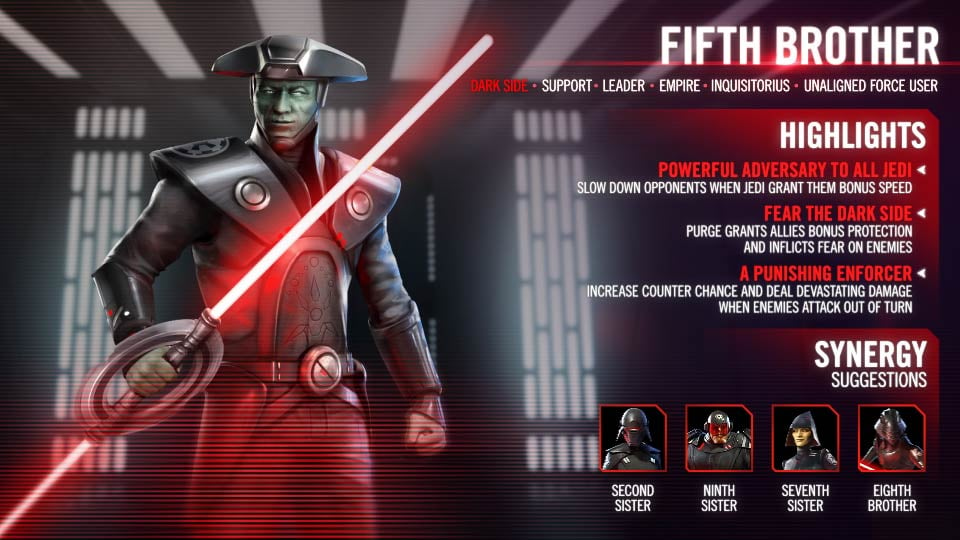 BASIC: I Shall Go Alone

Final Text: Deal Special damage to target enemy and inflict Vulnerable for 2 turns. For each stack of Purge on the target, all Inquisitorius allies gain 10% Protection Up (staking) for 2 turns. If the target has at least 3 stacks of Purge, gain Damage Immunity for 1 turn, Stun target for 1 turn, and if enemy was a Jedi, inflict Fear on all non-Jedi enemies for 1 turn, which can't be copied, dispelled, evaded, or resisted.

Leader - I Sense Those We Seek

Final Text: Empire allies gain 5% Defense and Max Health. Inquisitorius allies gain an additional 30% Defense and Max Health. If the enemy leader is a Jedi, inflict a stack of purge on the leader and all non-Jedi enemies at the start of battle (stacking, max 6), which can't be resisted, and whenever Purge is consumed or dispelled on non-Jedi enemies (excluding Galactic Legends) they lose 3% Speed (stacking, max 18%) for the rest of the encounter. Whenever an ally Inquisitor uses a Special ability, apply a stack of Purge on target enemy, which can't be evaded or resisted.

While in Territory Wars: If the enemy Leader is a Jedi (excluding Galactic Legends), Jedi Leader abilities that grant bonus Speed to non-Jedi allies additionally remove 70 Speed, and whenever a non-Jedi enemy gains Retribution, dispel Retribution and instead inflict Expose for 2 turns, which can't be resisted. Whenever an enemy gains bonus Turn Meter, Inquisitorius allies gain 15% Turn Meter (limit once per turn).

Final Text: At the start of battle, if all allies are Inquisitorius, Fifth Brother has +100% counter chance. Recover 5% Health and Protection whenever an enemy attacks out of turn, if the enemy leader is a Jedi, whenever a non-Jedi enemy gains bonus Turn Meter, inflict Provoked on them for 1 turn, which can't be resisted. Whenever a Jedi uses a Basic ability during their turn, they are inflicted with Breach at the end of their turn for 2 turns.

Q: On his second special is it just the Fear that can't be Copied/Dispelled/Evaded/Resisted or does that clause extend to the Stun he inflicts or the Damage Immunity he gives himself.

A: Only Fear is Copied/Dispelled/Evaded/Resisted, this clause doesn't apply to Stun and Damage Immunity.

Q: On his Unique does he regain Health/Prot from enemies attacking out of turn if the enemy leader isn't Jedi

A: Fifth Brother gains Health/Protection whenever any enemy attacks out of turn

Q: Can Provoked be Dispelled? And is it coded as the opposite of Retribution for things like GK and Baze reversing buffs/debuffs?

A: Yes it can be dispelled and no it is not the opposite of Retribution