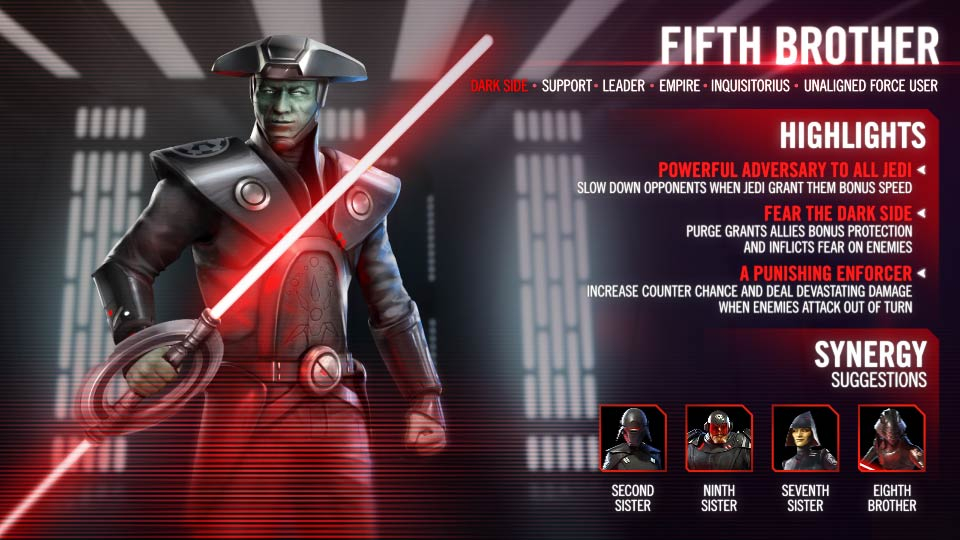 Fifth Brother is here to round out your Inquisitorius team! A powerful Inquisitor who isn’t a fan of Jedi comes to a Holotable near you, ready to Purge and apply devastating debuffs! In addition to that, he will also help your team out in Territory War with his Omicron ability, I Sense Those We Seek, which will slow down Jedi leader abilities who grant speed (minus Galactice Legends).

Fifth Brother’s abilities will look to stack Purge on the enemy, especially Jedi.

And if you thought Fifth Brother couldn’t be anymore annoying for Jedi and friends, his Unique ability, A New Target, and Leader ability, I Sense Those We Seek, look to punish Jedi Leaders who don’t fill out their team full of Jedi.

Below, we take a dive into the developers’ motivations and inspirations while creating the kit for this new character.

What is required for Fifth Brother’s Legacy Tier in his Marquee?

You will need Fifth Brother, Second Sister, Ninth Sister, Seventh Sister, and Eighth Brother all at 5* to play the Legacy tier. The reward is a title, portrait, and 5 (five) Omicron Materials

What else are Inquisitors going to be required for?

In the coming weeks and months, you will see Inquisitors gain a Player-side modifier in frequent Galactic Challenges, a new Assault Battle requiring Inquisitorius units, and Conquest feats directed towards Inquisitors.

What is needed to unlock the Grand Inquisitor?

Why is the Grand Inquisitor event called a “Legendary” when it doesn’t have the same requirements as previous Legendaries did?

As the game adds more units, more acceleration, and frankly just more of everything, we’ve had to re-evaluate the entry requirements. Grand Inquisitor with his Omicrons will be able to challenge Galactic Legends and so we want to make sure that power is earned in game through other strong characters.