At that point in the game, I decided that I should start to farm a GL. If you check my other posts/videos, you can see that after I created my reliced level CLS-Chewpio (C3PO, R2D2, Chewbacca) (which was an extremely time-consuming effort though....), I started to farm the collectibles, JTR, Beskar Mando, JTR, Falcon and Chimera (I still need the 7* for them!), JKR. I did not start DRevan, Starkiller (end-game content in my opinion). I formed teams from them for my GAC defense, mostly, and upgraded them to G12. This process consumed quite a lot of time, but the problem with this was that these teams are not able to pack a punch in Conquest, my CLS is still the only team that can do good in normal Conquest stages. So, in order to compensate for my roster from this perspective, I decided to start a GL.
I have some priorities when I choose a GL:

I prefer the Siths from the movies, from the games, and in the SWGOH too, though my very first reliced team is a CLS-Chewpio. I lamented between JML and SEE then I realized that I had to have JKL, reliced Hoda, and reliced ROLO. I do not have them, not yet, and while I farm SEE, with the help of the nice imperial troopers and Siths who I will gather along the way to SEE, I will be able to collect Rolo and Hoda (or at least that is my plan).
If you do not want to read on then just watch this video embedded -> 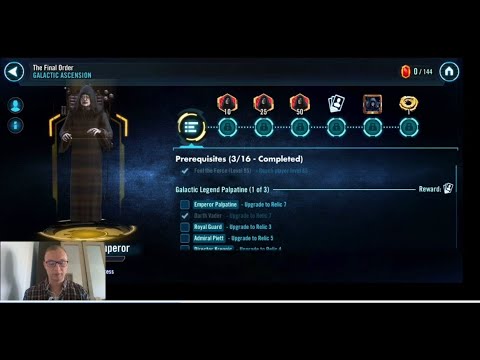 The main point is that while I try to collect SEE, I will acquire nice teams who will help me to achieve better placement in GAC, and to finish at a better point in conquest. The first team that I will have is the basic/core Empire. Palpatine, DVader, Thrawn, Tarkin, Royal Guard. The first character who I upgraded was DVader with Palp's Zeta. The two of them can do an extremely good job in GAC. Tarkin and Thrawn will help me in the fleet section, while the RG is a good overall defensive toon.
The next team will be the "left-over Siths" with DMaul's Zeta lead. Count Dooku, Sidious, Marauder, and DMaul are good 4 Siths. However, under the name of efficiency, I only want to put in another "outsider" and that Sith is going to be Savage Oppress. He works well with DMaul. I know that they are not top-tier Siths, though I do not think that it is mandatory to leave them out of the game just because of this. If you have to upgrade them to relic levels, why not use them? So, this Sith team is an okey. The next team will be an Imperial Trooper team with Starck, Veers, Piett, Krennic. These four are necessary for SEE, and for Krennic, it is a wise choice to farm the Death Trooper.
It seems that SEE is a wise choice for a first GL. He is not that expensive, he gives you good teams along the way, useful fleet ships, and SEE is also an extremely powerful character.

I know that there are lots of players who start or started to farm SLKR. I do not say that it is not a good choice, actually, everyone does whatever s/he wants, SLKR IS a really good choice too, but my personal preference and game plan lean towards SEE.

So for now, I managed to have DVader relic 7, Tarkin relic 3, Thrawn G12. I continue with Palp to G12, and Royal Guard to G12. Then I will upgrade the G12s to the necessary relic levels, though Palp will be a time-consuming effort - he needs to be upgraded to relic 7. Thrawn should be r6, which is expensive too, but RG needs to be only r3.

That is all for now, I will make a new post as soon as I will have the core Empire team, and I can start the "left-over" sith team.