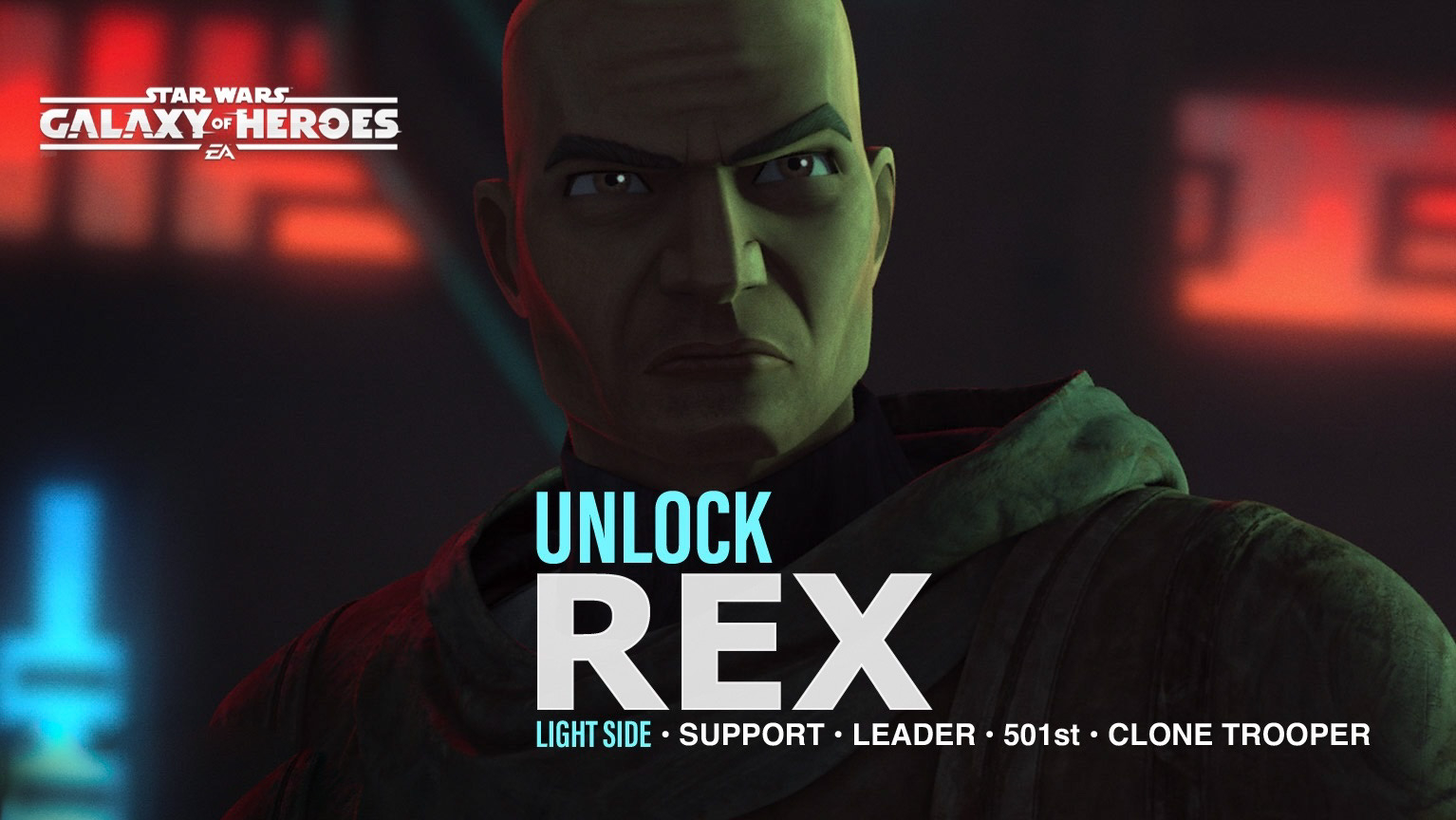 (This is a concept post, so no dev insights here lol)

FINAL TEXT (ZETA) (OMICRON): dispell all buffs and debuffs on target ally. They heal 5% health and protection for each buff and debuff dispelled this way. If they are a clone trooper ally, Grant them Removed Chip until the end of the encounter. This ability starts on cooldown.

Removed Chip: not a buff, can’t be dispelled or prevented and doesn’t stack. This unit gains 20% of Rex’s max health, max protection, offense, potency, and speed. This unit gains additional bonuses based on the following criteria.

- Non-Bad Batch Clone Trooper Ally: they revive the first time they are defeated and take a bonus turn after the revive

- Bad Batch Ally: gain undispellable defense up until the end of the encounter

[While In Grand Arenas]
allies with removed Chip instead gain 50% of Rex’s max health, max protection, offense, potency, and speed. They become immune to fear and daze, and this ability does not start on cooldown.

FINAL TEXT (ZETA): All Clone Trooper and Jedi allies have +10000 Max Health and Protection. If all allies are Clone Troopers, Jedi, or Bad Batch, all allies start the battle with 100% undispellable protection up and undispellable offense up until the end of the encounter if there are more enemies than active allies at the start of combat. Rex decreases his starting cooldown for Fives Warning by 1 for each increase in the difference between the number of allies and enemies at the start of combat.

Clone trooper allies have +50% potency, gain 10% offense for each other Clone Trooper and Jedi ally, and share thier unique abilities with all other clone trooper allies (excluding Five’s Tactical Awareness, Captain Rex’s Captain of the 501st, and all bad batch allies).

Bad batch allies have +50% defense, gain 10% speed for each other bad batch ally, and gain stealth whenever they score a critical hit.

Jedi allies have +50% tenacity, gain +10% max health for each other Jedi and clone trooper ally, and heal 20% of their max health at the end of each of their turns.

Daze does not prevent allies from attacking out of turn.

Unique 2: Captain or Sir
FINAL TEXT (ZETA):
Rex assists whenever a clone trooper or Jedi ally uses an ability, dealing 60% less damage. If the target of the assist is a droid, daze them for 1 turn. If the target is empire, remove 10% turn meter, doubled for imperial troopers. 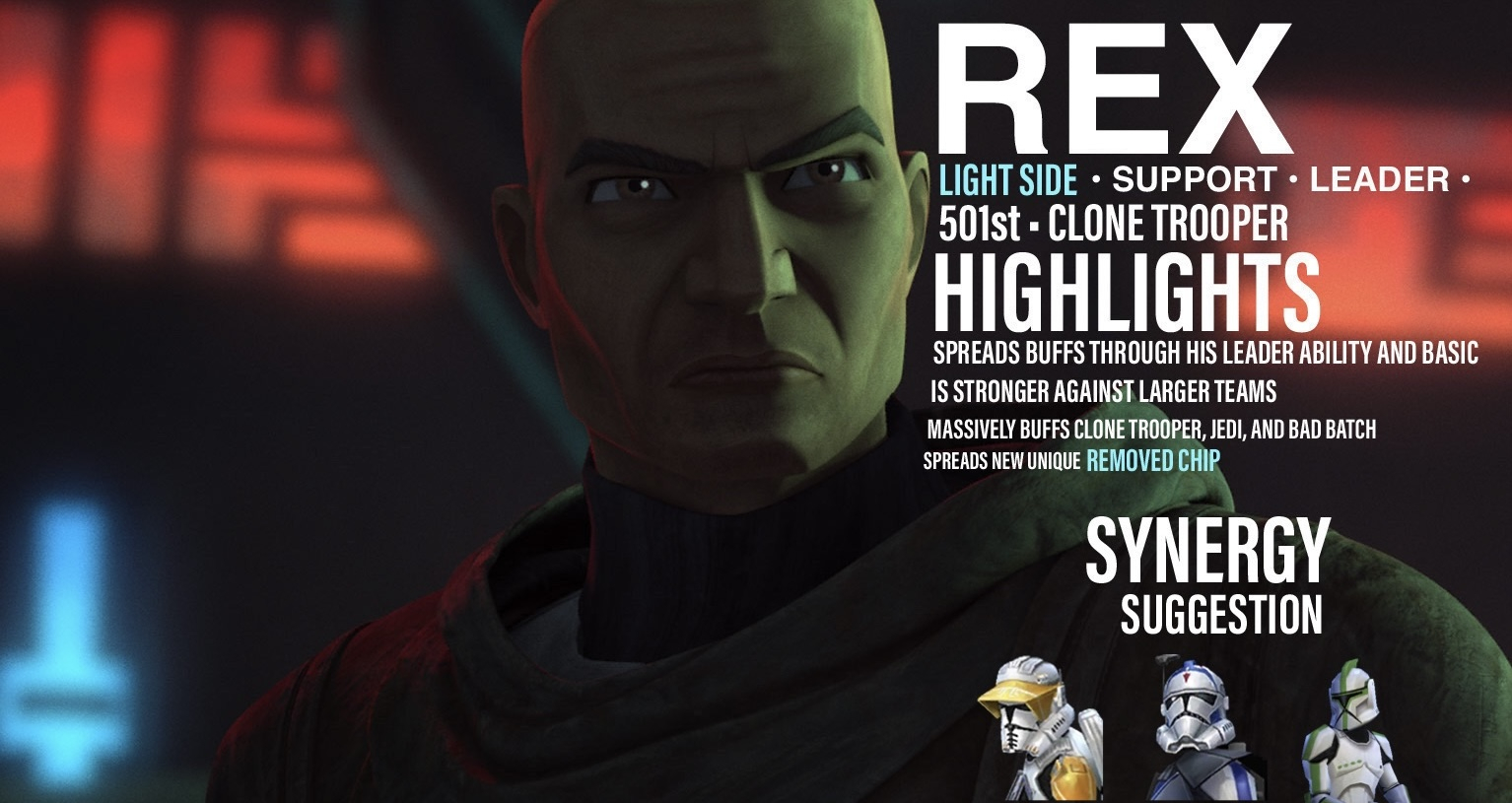 From the OP: hey guys! First post, been workshopping this for a while. Apologies for my lack of computer animation skills, or I would’ve totally made animations for the abilities. I brewed this kit out of love for the clone wars. You’d be able to earn Rex through an epic confrontation style event, if you’d like me to do a mock up for that let me know! I’d love to know what you all think in the comments!