Today we have an exciting State of the Galaxy focused on two major announcements: an upcoming Title Update with many quality of life changes for Mods, and a new Galactic Legend. But that’s not all, we have a new Capital Ship that will rival the Executor and a marquee that will tie into the new Bounty Hunter Galactic Legend.

The mercenary and bounty hunter Krrsantan is coming to the holotables soon. You can find Krrsantan’s kit here and read more about him in his Dev Insights article on our forums here.

Krrsantan brings with him a brand-new tag: Hutt Cartel. This tag is being added to a number of existing units who have had strong ties to the Hutts and we feel benefit the most from this new tag. Boba Fett, Embo, Cad Bane, Greedo, Gamorrean Guard, Mob Enforcer all receive the new tag beginning with the next update.

But what is the driving force behind adding this new tag?

The notorious gangster Jabba the Hutt will be joining the holotables in the coming months! 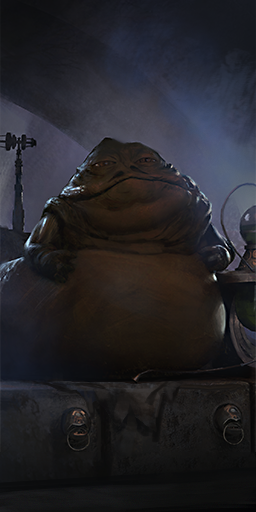 Jabba the Hutt is an incredibly imposing character to bring to the holotables. He will not have a Galactic Legend counterpart (like Rey and Supreme Leader Kylo Ren or Jedi Master Luke and Sith Eternal Emperor). He will interact heavily with the new Hutt Cartel tag and have synergy with Bounty Hunters and Smugglers. This includes having a special Contract for Bounty Hunters while he is the leader.

Jabba is on par with the other Galactic Legends and is primarily designed to work in concert with other Hutt Cartel units. His first set of requirements are shared below and start with the new Wookiee Bounty Hunter, Krrsantan. Krrsantan will be one of several upcoming Marquees that directly support this new Faction tag and these Marquee units will be requirements for Jabba the Hutt while working exceptionally well with Jabba as the Leader. If you want to go after Jabba, you’ll want these Marquee characters powered up to Relic levels, not just for the Requirements but also for the powerful squad Jabba will lead.

And with that, the first set of prerequisites for Jabba the Hutt are:


As a crime lord, Jabba always likes to have a piece of the action, and you will find him useful in Territory Battles, such as on Hoth and Geonosis Territory Battles will both be receiving an extra battle that requires Jabba so he’ll have utility right out the gate. Jabba the Hutt will have more direct uses in the near future, so you won’t want to miss this character! We will have more to share about Jabba the Hutt’s other utility locations in the next Road Ahead.

When we introduced Executor to the ship meta we ushered in a new era of Fleet Arenas and Grand Arena Championships. After nearly one year of Executor’s existence, we are releasing a brand-new capital ship designed to challenge these fleets.

Some players have seen all the clues we’ve laid over the past months but now we are ready to announce the next Journey Guide capital ship: the Profundity. This ship, captained by Admiral Raddus himself, brings parity to the ship meta’s top tier. Profundity is a Rebel capital ship, working well with ships like the U-wings, Ghost, and the Rebel Y-wing. This new Capital ship will bring added utility to the Outrider’s Download mechanic as the Profundity will also be receiving the enemy’s top secret battle plans throughout the engagement as a core mechanic for the fleet.

Profundity, like Executor, will require both ships and Relic’d characters to participate in the Journey Guide event.

Of note, the ships listed are only required at 4-star rarity to begin the event, in order to unlock Profundity players will need the ships to be 7-star rarity to participate in the final tier.

Profundity Prerequisites:
RELIC UPDATE
With the continued growth of the Relic system over the last few years, some lower-tier Relic materials have become scarcer than intended. As a result, high-requirement chases (R7+) are sometimes preventing Players from working on other squads or goals. To address this, Carbonite Circuit Boards and Bronzium Wiring will be removed from Relic 8 and Relic 9 recipes. This frees those Relic Materials to be used on newer and/or in-development squads.

Many of you will be happy to hear that our next Title Update will dive deep into the Mods system. With this Title Update we want to focus on the Modding experience as it can take time to manage effectively. We have focused on speeding up the process of upgrading and equipping Mods while also adding several new features to make finding the right mods much easier. 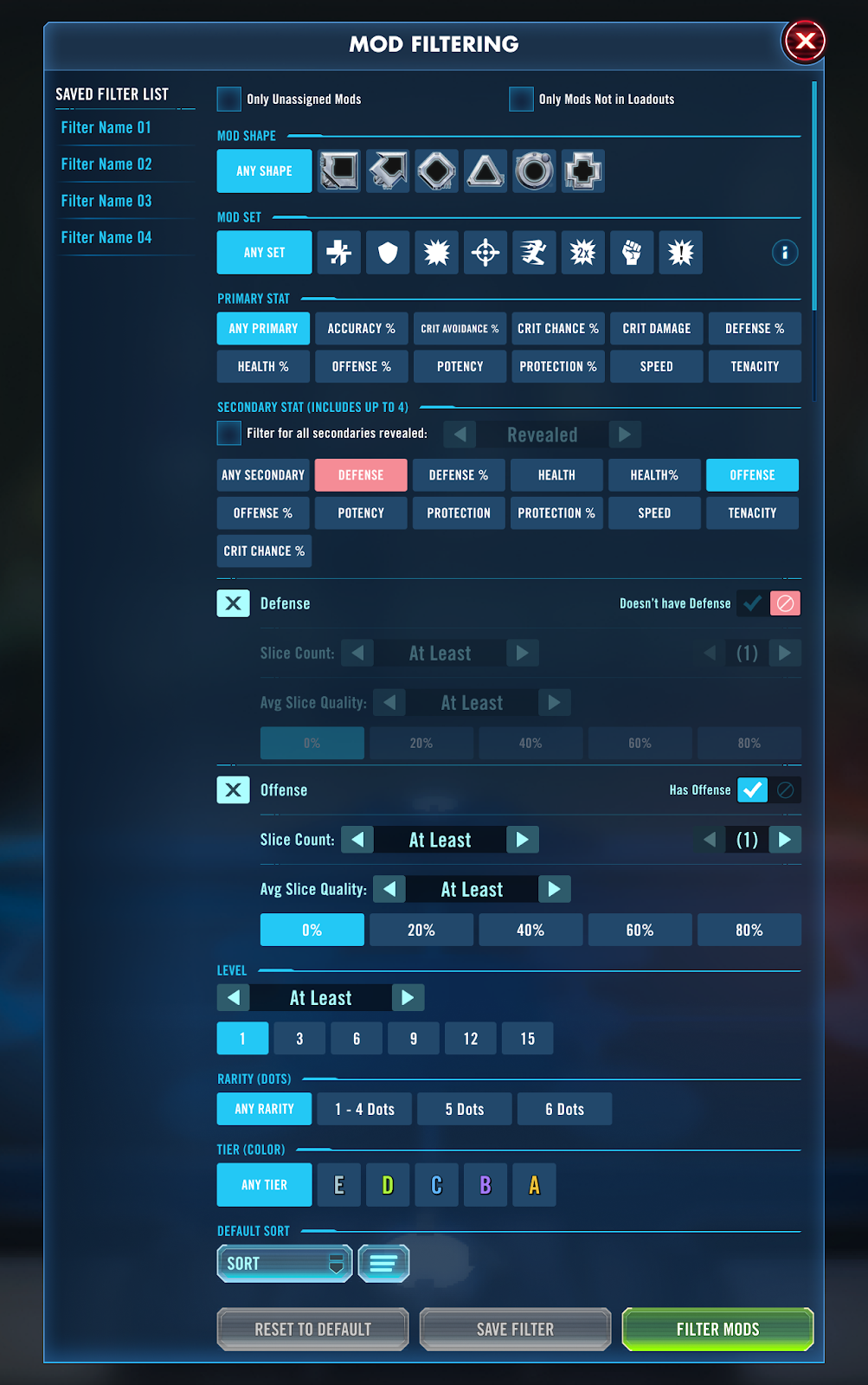 (Note: Image is purposely lengthened beyond the in-game bounds for illustrative purposes)

Locating the precise Mod you're looking for in your inventory is an important operation and there are many variables that need to be taken into account when searching for a Mod. As a result, we will be adding the following features to increase efficiency and precision.

(Note: Terminology is subject to change) 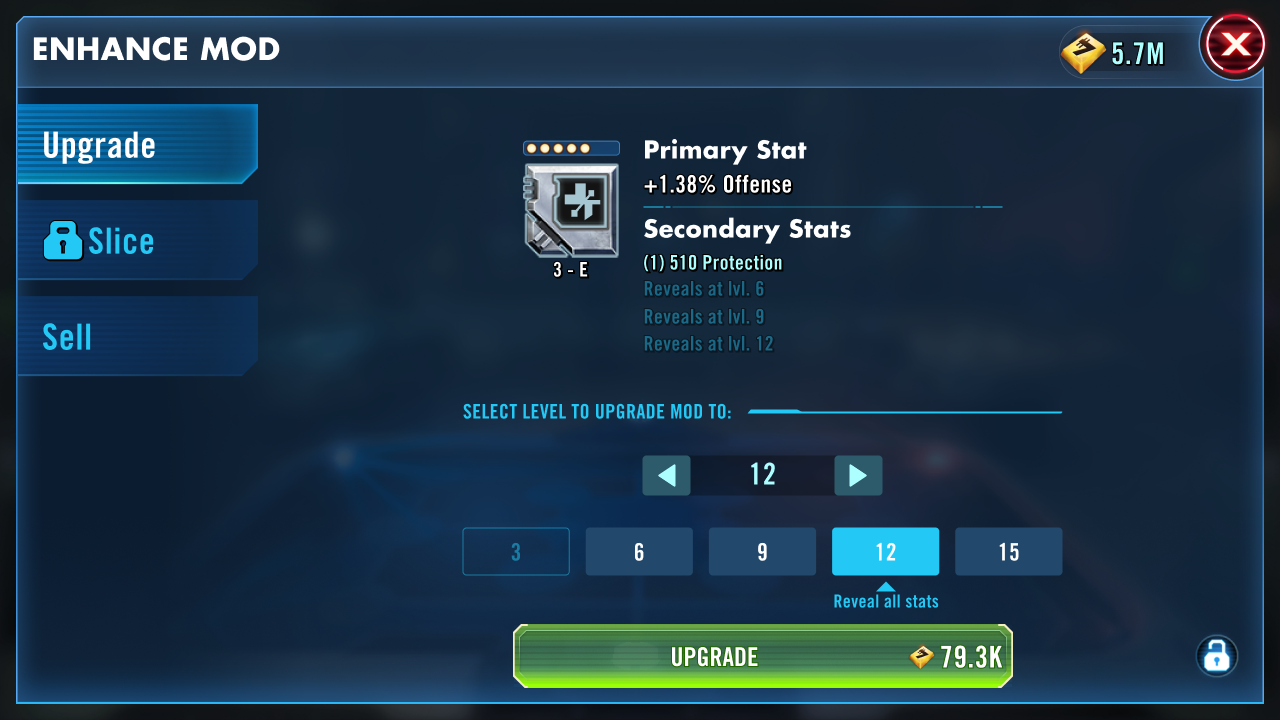 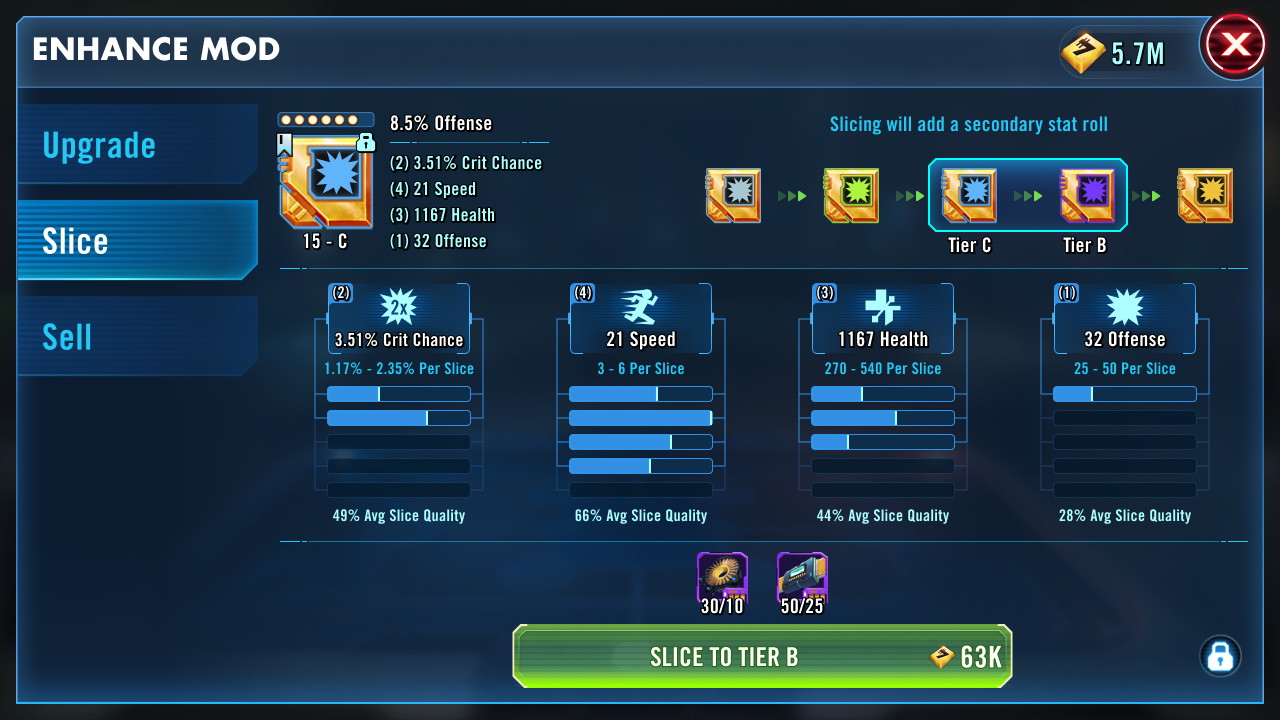 We’re organizing all the Mod operations into a single screen called Enhance Mod. This screen will contain all the Mod actions in a single, convenient spot for players and reduce the number of taps needed to operate on a Mod.

We’re also making adjustments to the Upgrade and Slice screens. We’ve replaced the Level slider on Upgrades and have instead implemented buttons that allow you to quickly select important levels on a Mod. Additionally, we’re giving players more detailed information about which level Secondary Stats will be revealed.

Finally, the Slice screen is now updated to give you a better picture of what’s happening underneath the hood. Slicing a mod is the process of improving the power of a random Secondary Stat. We’re adding a visualized graph per Slice so you have a better understanding of where a Mod’s strength sits relative to others.

Batch Manage Mods
Upgrading Mods requires players to pay individual attention to each Mod in order to determine its value. When we’re talking about hundreds of Mods, Mod management adds up over time which can be a little overwhelming. We’re going to be streamlining this process that is so frequent and key to player progression in our next update. 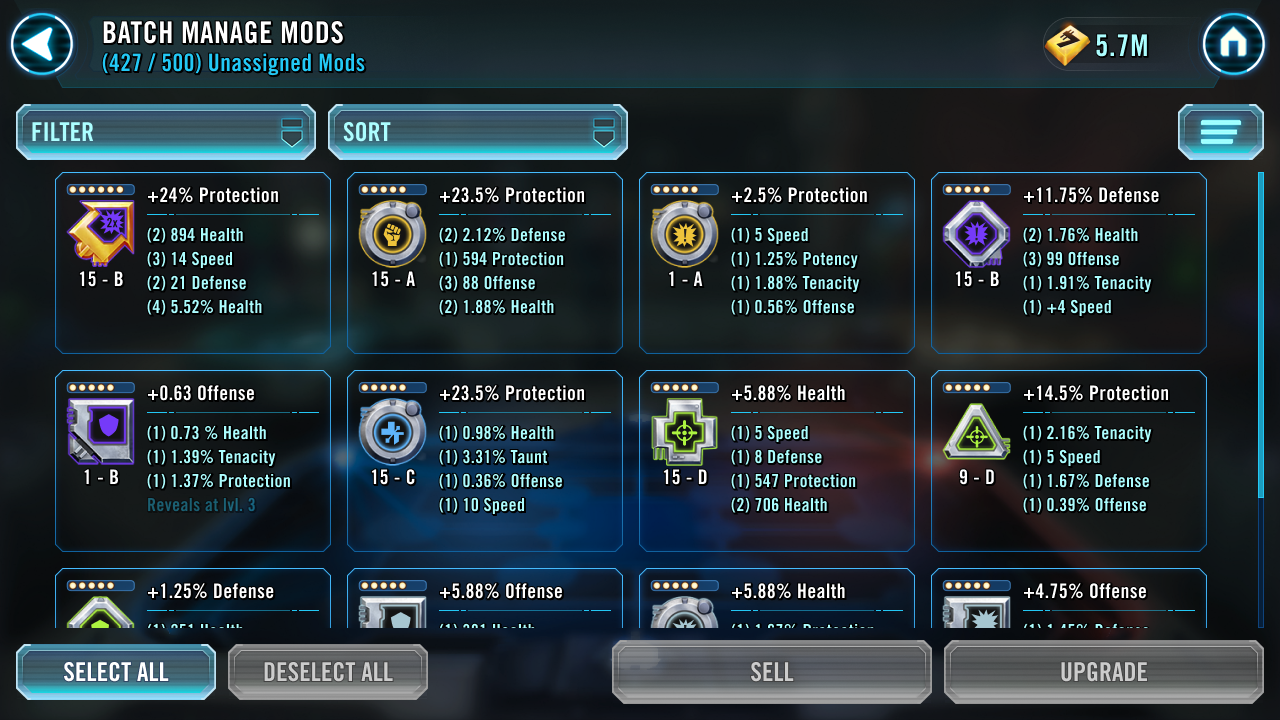 (NOTE: There is some placeholder test data that slipped into this screenshot when we were mocking it up. Who knows what 3.31% Taunt even means)

With our next update, players will be able upgrade and sell any number of Mods at once with our new Batch Manage Mods feature. Batch Manage will work with all of the new Filter and Sort features described previously, making it very quick to sell unwanted mods and identify Mods you would like to invest in. 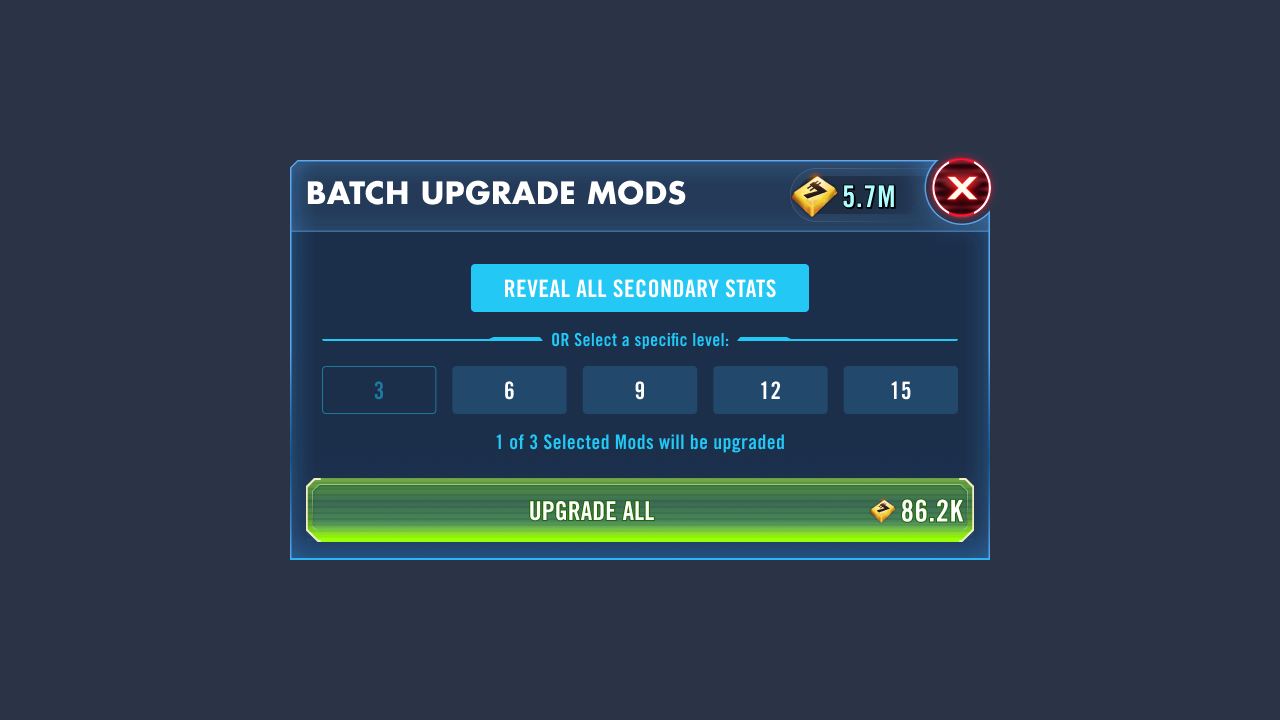 On top of that, we've added another feature when Batch Upgrading Mods called "Reveal All Secondaries." This feature will allow you to take a group of Mods of different Tiers and upgrade them all to the minimum level that would reveal all the Secondary Stats. The intended goal is for players to easily reveal all the necessary info to decide if you would like to keep a Mod.

Thank you for reading our July 2022 State of the Galaxy! We have a ton of exciting things coming to Star Wars: Galaxy of Heroes and we look forward to your feedback and seeing what you’re excited about!