Lore:
A pasty-faced male Twi'lek who served Jabba the Hutt for decades, Bib Fortuna greeted all those who sought an audience with the Hutt, forcing those who wanted to meet with Jabba to maneuver past the majordomo. Even so, Fortuna at times understood his duties included denying visitors permission to see Jabba, whom he called his master. The majordomo held great patience thanks to his job, needing to deal with individuals ranging from haughty emissaries to drunken ruffians. After Jabba's death in 4ABY, Bib Fortuna quickly claimed the throne as crime lord of Tatooine. In 9ABY, his tenure came to an end when the Bounty Hunter Boba Fett executed him and took the throne. 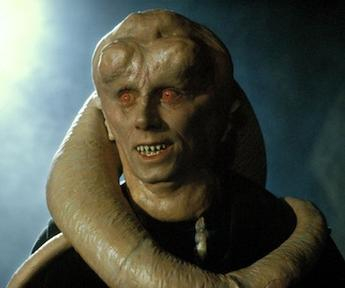 Bib Fortuna dispels all Debuffs on the target ally and grants them the 'Advice' unique buff. Call all allies with Advice to assist, dealing 55% less damage. Bib Fortuna also inflicts Buff Immunity on the target enemy for 2 turns.

Advice: +20% Offence, Tenacity, Potency and Accuracy, doubled for Hutt Cartel allies and their cooldowns decrease by 1. Can't be dispelled or prevented.

Grant all allies Potency Up for 2 turns. If all allies are Hutt Cartel, grant them Foresight for 2 turns and 10% Turn Meter. If Jabba the Hutt is present, he gains a bonus turn and all his cooldowns are reset.

Bib Fortuna gain +100% Evasion and Stealth for 2 turns at the start of each encounter. If an ally with Advice is defeated, Bib Fortuna gains a bonus turn and all his cooldowns are reset. If Bib Fortuna is active, Jabba the Hutt can't be targeted. If there are no other active allies, Bib Fortuna escapes from battle.

I know the kit looks lackluster and is essentially a reskin of Hoda, but this was hard to pull off and the Hutt Cartel is still in its infancy