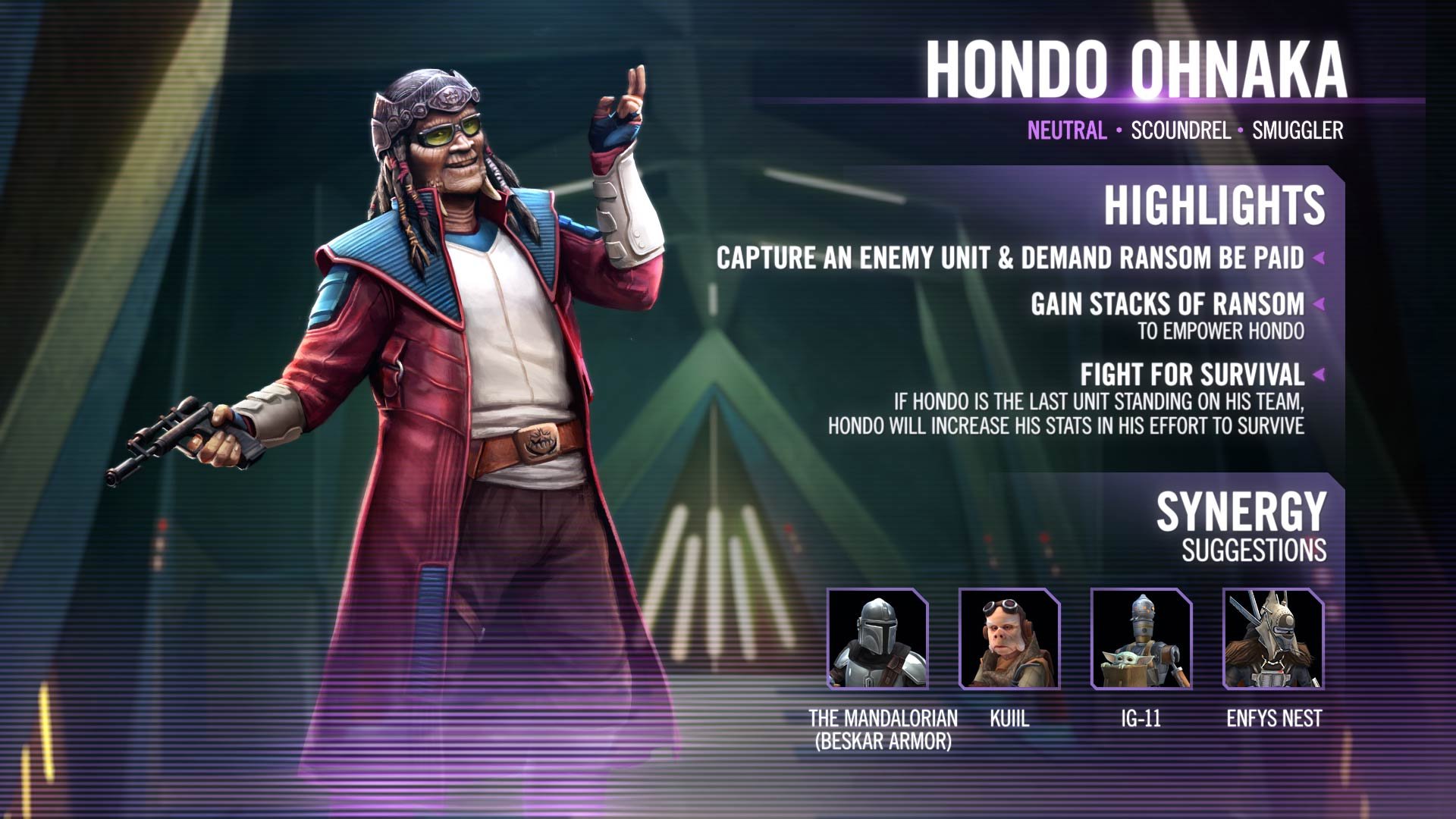 These are merely guidelines.


Key Attributes:
Inspiration:
Strategy Tips:
FAQ:
What is Neutral alignment?
Hondo is neither Dark Side nor Light Side, he’s Hondo Side. Since Hondo Side doesn’t exist in the game, but the Neutral alignment does, it made perfect sense for him to be the very first unit with this tag. While Neutral is distinct from Light and Dark and does not encompass both, he is still available to be used in either side of Campaign Battles and Territory Battles.
How does the stacking on his Unique work?
Hondo gains 15% of some of his stats at the start of each turn if there is a Captive up to 150%. With the Omicron in Grand Arenas, he gains an additional 15% on top of the original 15% for a total of 30% per turn, up to a max of 300%.
Why does my Hondo sometimes flee mid-battle?
If he’s not getting paid, he’s not sticking around. If he doesn’t have 10 stacks of Ransom and his Captive is defeated, he will escape from battle (flee).
In Grand Arena/Territory Wars, what happens if Hondo flees at the same moment he defeats the enemy squad?
Hondo will defeat the enemy, and then immediately escape the battle, which will end up in a loss for Hondo’s side. Banners earned for defeating enemies will be awarded, but banners for Victory in the battle will be lost and players will still be able to proceed past this battle to continue onwards. While getting into this situation is rare, we really like this mechanic and want to see how this plays out in the live environment. We will be monitoring and will make changes to the mechanics if warranted.

UNIQUE 2: I Guess We Won't Be Friends
Final Text: The first time any character gains bonus Turn Meter each turn, Hondo gains 5% bonus Turn Meter. Whenever any character gains a buff, Hondo recovers 5% Protection. Whenever any character assists, Hondo gains Protection Up (5%, stacking) for 1 turn. If Hondo had at least 2 other allies at the start of the encounter, the first time Hondo has no other active allies, he gains 100% Turn Meter and 25% Counter Chance, Defense, Evasion, Offense, Potency, and Tenacity for the rest of the encounter.

Question: How does Hondo interact with Datacrons?

Answer: Hondo is not considered Light or Dark side, so any kits or datacrons that have bonuses for those alignments will not apply to him. He can still gain stat, faction, and character bonuses through datacrons.
Post edited by CG_Tusken_Meathead on October 4
5