As you can see in my videos, I started to gather my sources for the Sith Eternal Emperor in May, and in these days, I managed to unlock the Emperor. However, I do not have the Ultimate ability, not yet, but I thought that I would record my attempts to do the three Tiers, in case you need a thorough video guide (like you want to make the attempts for yourself, but don't want to lose the precious dark side currencies).

So first, if you prefer videos, then here is my video guide: 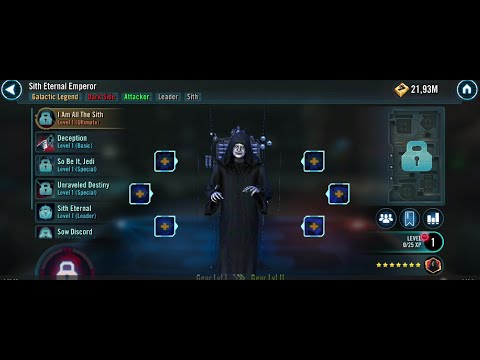 In case you do not like to watch videos:

It took me 5 months to do the gearing and relicing. Then you have to gather dark side currencies in dark side battles - good idea to gather Badstilla or Medpac Salvages (they are needed for the Emperor too).
First tier: Darth Sidious faces Mace Windu and the sidekick Jedi Masters. Start with the AOE and then basic all the sidekicks. Avoid! Mace Windu, do not attack him. This tier can be done 8 times for the 10-shard reward.

Second tier: A little bit harder than the first one. Here, you have to defeat Windu, but with Jedi Knight Anakin. There is one trick here that you have to keep in mind! If you use the AOE of Anakin before Windu does his Smite (special ability) then he will dispel your precious buffs and you will lose. You have to see Windu do his special, so you can do the AOE after that. With the buffs you will be able to defeat him, without the buffs Windu will slice you up!

Third tier: Not difficult but you will need some RNG. There are two parts here, in the first one you face Jedi Knight Luke Skywalker with Darth Vader, and after you succeed, Palpatine will play his part. With Vader, it is easy, you just have to stick to the basic in order to land ability black, but if you have more turns than you need, you can do the Force crush to apply the speed-down debuff. If you manage to harm Skywalker a lot, then the game changes to Palpatine. Here comes the RNG, as you need to apply the shock debuff to Skywalker. If you can't do that, then you will be cut down. Shock debuff will kill Luke before he can destroy Palpatine.

This is it, gather enough Dark Side Currency, and you will have the Sith Eternal Emperor.

Thank you for watching/reading this guide.