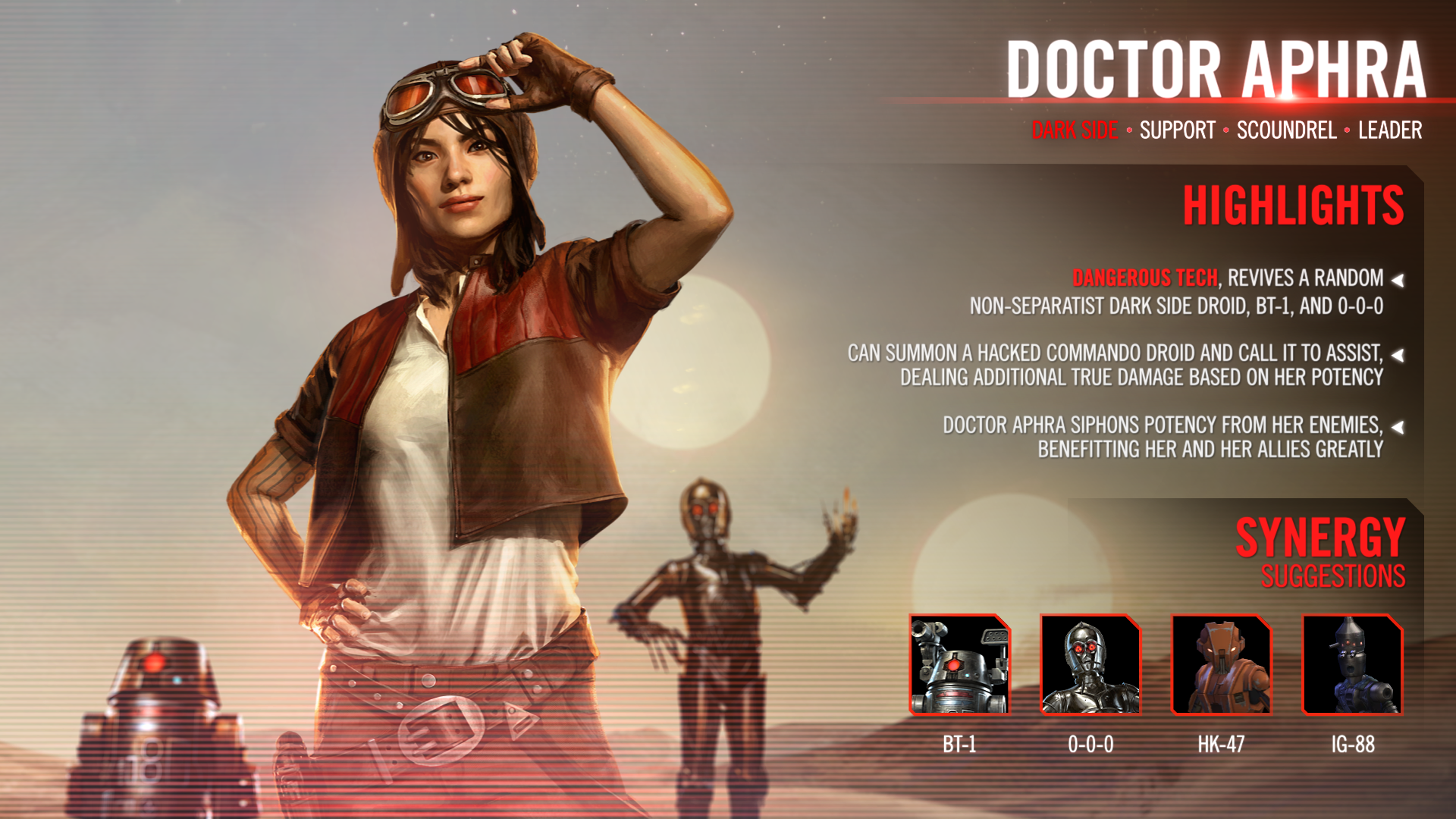 When does her event start?
Her event will begin immediately after the next game update. This event will be permanently available in the Journey Guide.
Have a question about Doctor Aphra’s Kit? Fill out this form here:
CLICK HERE
Question Deadline:12/14/2022, 11:59 PM PT

Final Text: Deal Special damage to target enemy. If they are a Droid, Stun them for 1 turn.
On Aphra's turn, she gains 10% Max Protection (stacking, max 50%) and 2 Siphon until the end of the encounter.

Final Text: Deal Special damage to all enemies, increase their cooldowns by 1, and inflict Doubt on them for 2 turns. Aphra Siphons Potency from target enemy, which can't be resisted.
This ability can't be countered.
Siphon Potency: Gain a percentage of Potency equal to this unit's Siphon until the end of the encounter and the target loses that much Potency (stacking, excludes raid bosses and Galactic Legends)
While in 5v5 Grand Arenas: Deal bonus damage to target enemy based on 50% of Aphra's Potency. Inflict Buff Immunity, Healing Immunity, and Stagger on target enemy for 2 turns.

LEADER: Suspended Doctorate (Zeta, Omicron)
Final Text: At the start of battle, Doctor Aphra gains Max Health and Max Protection equal to 30% of her Potency, and if BT-1 or 0-0-0 are an ally, she gains 50% Turn Meter for each. Dark Side allies have +20% Offense. Dark Side Droid, Darth Vader, and Krrsantan allies also have +20% Max Health.
Whenever a Dark Side ally inflicts a debuff, they gain 5% Offense for 1 turn and Aphra gains 5 Siphon until the end of the encounter. If the Dark Side ally is a Droid, Darth Vader, or Krrsantan, they instead gain 10% Offense for 1 turn and Aphra instead gains 10 Siphon until the end of the encounter. Whenever Doctor Aphra, BT-1, or 0-0-0 inflict a debuff or are critically hit they gain 10% Turn Meter.
Whenever an enemy falls below 30% Health, they are inflicted with Expose and Speed Down for 2 turns, which can't be evaded or resisted.
While in 5v5 Grand Arenas: Dark Side Droid and Dark Side Scoundrel allies have +50% Critical Avoidance and +30 Speed. Aphra has +50% Potency. Whenever a Dark Side Droid or Dark Side Scoundrel ally inflicts a debuff on an enemy, they gain 10% Turn Meter (limit once per turn).
While enemies are debuffed, they have -20% Tenacity.

Hacked Commando Droid (Summoned)
Description:
(Basic) Enfilade: Deal Physical damage to target enemy. All allies without Offense Up gain Offense Up for 2 turns.
(Special) Besiege (CD3): Deal Physical damage to target enemy and call a random ally to assist.
(Special) Lunging Strike (CD3): Deal Physical damage to target enemy and inflict Armor Shred for the rest of the battle. This attack deals 20% more damage for each buff and debuff on the target enemy. Enemies defeated by this ability can't be revived.
(Unique) Summoned: This unit's stats scale with the summoner's stats.
- This unit can only be summoned to the ally slot if it's available.
- This unit can't be summoned in raids.
- If an effect counts defeated units, this unit doesn't count.
- When there are no other allied combatants, this unit escapes from battle.
- A unit can't be revived if this summoned unit exists in their slot.