This weeks Top 10 Stars Wars: Galaxy of Heroes Characters brought you by Wise Man Pendle of Team Instinct and LordSkunk.com. Here’s this week’s list that we covered on the Live Show:

Now that I have maxed out a lot of the characters I was planning to at 80, I have been playing around with a few others and have found some hidden gems this week for sure! I am aware that a few of these are P2P exclusive but at least half of the list are available to you whatever your spend level in the game:

10) Stormtrooper Han. (I have been gearing him up and he is very useful on arena offence, because his turn meter manipulation is great, and whilst he himself doesn’t do a lot of damage, he allows others to do so. When paired with another decent taunt like RG or Chewie you can really start to take full control of a match because the opponent doesn’t usually have a way to debuff multiple taunts.)

9) Geonosian Soldier. (This week I’ve been trying out some assist synergy teams, where the assisting character does something on their basic like stun or heal or debuff. GS is my second favourite call to assist character and if you omega his unique he gets 50% turn meter every time he crits which makes him call that assist even more often!)

8) Qui-Gon Jinn. (He’s made the list every week and he continues to be invaluable in a variety of situations and teams. He is my favorite call to assist character because of his turn meter manipulation and his humbling blow. One thing to note, he doesn’t have any gear pieces at G11 and the jump in protection isn’t huge from 10 to 11 so you might want to put your scanner somewhere else and finish him off later.)

7) Jedi Knight Anakin. (I have been using him with QGJ because having both of them allows me not only to deal with a variety of in-battle situations but also pretty much guarantees that my team has offence up for the whole match. He is a character that needs to be played strategically, for example allowing an enemy to be put into the red so that you can AoE and get offence up is very important, so he takes a bit of time to get used to.)

6) Aayla Secura. (Her basic has a chance to trigger another assist, and whenever she crits she has a good chance to stun. She also has counter attack with extra counter attack damage, so if you’re facing an AoE heavy team she’s very useful, especially 40k Health + Protection at max level. And until we get given slave Leia, she’s probably the best looking hero in the game, so there’s that haha!)

5) Sun Fac. (He just makes life easy. I still only have him at G9 but a counter attacking debuff is a truly amazing thing. Once I eventually get my hands on a droid caller I will be giving it to him. He works very well alongside GS and Poggle in GW for some lovely synergy bonuses! He would be higher but he costs about 100K crystals to pack to 7* so he’s not readily available to most people yet!)

4) Leia. (Same as always, very consistent damage dealer. The reason she thrives in arena is because no-one is running much that counters her, but now that we might start to see some Echo’s around (more on that later) she might loose some of her credibility. She’s down a space from 2 weeks ago because you’ll notice that her partner in crime Fives hasn’t made the list this week because his basic got slightly nerfed, so that combination isn’t quite as potent)

3) Rey. (Probably the most important hero you can invest in right now, her speed and damage are just too good too ignore. Now that the arena will start to level out with level 80 team, it’s important that you try to learn exactly how much damage you can expect to do with each of her attacks, because you want her to definitely kill someone otherwise you’ll end up loosing to an unfortunate RG taunt!)

2) Captain Phasma. (I went so crazy buying gear from shipments when the update dropped a few weeks ago that I didn’t even realize I’d gotten my Phasma up to G10!! But since her re-work, she’s so good I’m glad I did. I think she really shines on an assist team as I mentioned earlier, because those extra stuns/ healing/ debuffing on basic is huge. She has an enormous health pool and regularly gives out advantage and takes away turn meter from the opposition team. For a decent F2P team at the moment try Phasma as Lead with GS, QGJ, RG and Daka, or Rey instead of RG on offence.)

1) Rex. (I think he has the best leadership of all the heroes that can reach Gear 11 at 80. He is still performing very well in multiple teams and the addition of a new clone in Echo benefits him more than the slight nerf of Fives detriments him so he’s keeping the top spot for now.)

Honourable Mentions: Fives (He’s still solid but everyone on this list is so good at the moment that I couldn’t warrant putting him in), Ackbar (I like what I’m seeing from his re-work but I need time to test it more thoroughly) and Echo (The new clone on the block has a very nice kit including a nice Anti-Leia AoE dispel so I can see him making the list next week for sure!)

The Top 10 SWGOH Characters for Tier 7 Raiding brought to you by Daniels Jack of TeamSkunk and LordSkunk.com. Here’s the list we covered in the Live Show:

1 Rex: He has everything that’s important. Dispel, group Tenacity Up, Turn Meter gain and TM remove chance, + he deals decent damage. He is good in every Phase but the one he stands out is Phase 1

2 Phasma: Turn Meter manipulation is the key to deal multiple damage and she does it better than anyone with her Group turn meter and a Slow down ability. She is your toolbox when the Rancor is doored but also against the piggies. As a leader her assist chance give u even more attacks. P1, P2, P3

3 Rey: She is your Nr1 damage dealer. Protects herself with Foresight and most important she is very fast. When the Rancor is doored you get at least 2 attacks. Good in any Phase

4 GS: DPS is so important, that he has to be in the Top 5. You don’t see his assist damage in the damage screenshot but have in mind his assist ability gave another character the chance to deal more damage. That’s the reason why assist characters are so important. He is good when the rancor is doored, because with Moral Bonus he has a 100% crit chance and when he crits he gets 50% turn meter (unique ab. Omega) Good in any Phase.

5 Yoda: His Battle Meditation gives everyone Tenacity up so you don’t receive any neg. buffs. This is so important for your damage output in Phase 3 because of Rancor’s unique ability (takes 50% less damage from enemies suffering a negative status effect) + you don’t get stunned all the time. With Yoda’s Basic you get Foresight but have in mind this is only triggered when the rancor has more than 50% health, so you wanna attack with Yoda in your first team. If possible spread around Foresight to your whole team in the right moment (not before rancor roar) and enjoy just 1 free attack round. He is best in P1 and P3.

6 Leia: She is a fast DPS and has a chance to buff your whole team (crit up) which is always good against the rancor roars so you don’t lose TM. Her only weakness is you cant protect her like in the arena with the Stealth ability, because the fight wont last long enough and you don’t wanna waste a turn.

7 Ackbar: Dispel is important in P1 and P3 and because Rex is P2P only and probably dies in P1, he is the best one for the F2Ps. With his rework he has now assist attack and Rebels are very good against the Rancor so you probably wanna use him in a rebel team (Han, HRS, Luke, Biggs, Leia…)

8 QGJ: He is the Nr1 Anti Taunt. Whenever the piggies taunt in P1 his humbling blow debuff them immediately. But also his speed, assist and turn meter reduction chance is good in almost any Phase. I would recommend to use him in P1, or in P3 as a Leader with the good old QGJ-Yoda Speed combo.

9 Han: Taunt chars are good in P2 and P3 because they receive 30% less damage from the rancor slam when they are in Taunt. But this isn’t his biggest advantage. Its his Turn Meter manipulation which you wanna use right when the rancor is doored.

10 Obi-Wan: He is a very good leader giving everyone more evasion + Turn Meter. In P2 you wanna neg. buff the rancor because of his unique ability (The Rancor has +50% Armor as long as it isn’t suffering any negative status effects.) and Obi-Wan has multiple neg. buff chance with his Mind Trick. The other thing is, when the rancor eats him, he just buff your whole team. Best in P2.


Check out the Live Show where we went over this list in-depth and more! 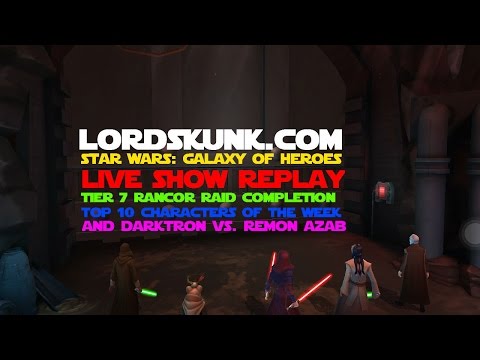