Lore:
Born as the orphan named Galli on Jakku, the man called Gallius Rax was placed on the path towards power when he had a chance encounter with the Sith Lord Darth Sidious. Rax rose through the ranks of the Galactic Empire as Sidious’ protégé, and the enactor of the Contingency. Following the Emperor’s death aboard the second Death Star, Rax took control of the remains of the Imperial forces. While Rae Sloane served as the public face of the Empire, Rax ruled from behind the scenes, eliminating rivals and manipulating galactic events. A master of deception, Rax tests the strength of both allies and enemies alike, and controls the battlefield through the manipulation of events and the elimination of allies. 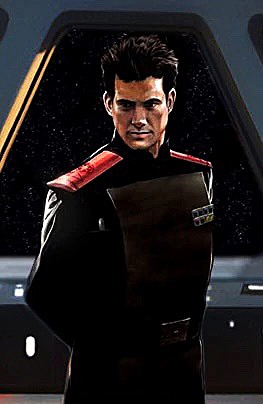 Basic: Ruthless Strike (Omega):
Deal special damage to target enemy and dispel all buffs on them. If they had no buffs, inflict Defense Down and Speed Down for 1 turn.

Special: Pulling the Strings (Cooldown 4) (Omega):
Dispel Foresight and Stealth on all units, and Gallius Rax gains Stealth for 2 turns. Then, deal special damage to all enemies, and call all other Imperial Remnant allies to assist (dealing 20% less damage). Additionally, all other Imperial Remnant allies gain Retribution for 2 turns, and all enemies lose 20% Turn Meter.

Special: Test of Strength (Cooldown 4) (Zeta):
Dispel all debuffs on allies and buffs on enemies, and they take damage equal to 5% of their Max Health for each effect dispelled on themselves. For each status effect dispelled this way, Gallius Rax recovers 5% of his Max Health and Protection, and Imperial Remnant allies recover Health equal to 50% of the Health recovered.

Units defeated by this ability can’t be revived.

Leader: Emperor’s Contingency (Zeta):
Empire allies have +25% Potency and +30 Speed. Additionally, they have +5% Offense (stacking) and -5% Defense for each debuff on themselves, and recover 10% Health whenever they gain a buff.

Unique: Shadow Emperor (Omega):
Gallius Rax has +10% Offense and +5% Evasion for each Empire ally. Additionally, Gallius Rax gains Stealth for 2 turns at the start of every encounter, and reduces his cooldowns by 1 whenever any unit is defeated.
One may learn a great deal about a people by the stories they tell of others.

Thank you for evaluating. Your feedback has been noted.
Post edited by Xcien on November 2
1