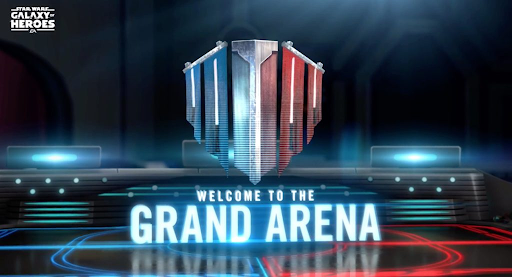 In this State of the Galaxy we will be covering some of the biggest changes coming to Grand Arena Championships and Squad Arena since their launch. As a character collection game, our emphasis is on rewarding players for cultivating a broad set of unique squads and enabling players to use those squads against many different matchups in order to create a compelling long-term experience. Reaching new ranks after winning a challenging battle against your true peers should feel like a fun and exciting moment. The best place for this experience in our game is Grand Arena Championships and the changes we’re announcing today are to continue to reinforce Grand Arena as the ideal mode to challenge a player’s roster and skill in Star Wars: Galaxy of Heroes.

As we continue to expand on the foundation we laid down years ago, we want to give Grand Arena participants an exciting fight against your true peers that you can win if you fight hard enough. One of the largest changes is coming to Grand Arena matchmaking. Matchmaking will be extensively reworked to be based on a ladder system with League changes occurring at the end of each season instead of throughout. Players will be matched based on their Win/Loss record via a new "Skill Rating" score, allowing Players to freely grow their squads and GP without worrying about brackets and distinguish who is the most effective at using their roster.

These changes set the stage for a very important update, Crystal rewards will move from Squad Arena to Grand Arena. This is a huge change for Galaxy of Heroes and there are many parts of Grand Arena that will be updated to smooth over the transition between these two very different structures. There are many smaller changes to Grand Arena, such as timing for payouts compared to Arena, that will need to be adjusted to keep Crystal rewards flowing at a similar rate and account for players who are not able to access Grand Arena yet.

There’s a ton of information to digest below so we will be hosting a Q&A on the forums on 12/02 to answer questions related to these changes.

MATCHMAKING
First, let’s dive into how the Matchmaking system will be reworked as it will impact many of the other changes that are discussed below.

Grand Arena will now use a more traditional ladder system based on Skill Rating. This means your progress in Grand Arena is now detached from your GP and you will climb the ladder over time instead of trying to reach the top each Season. Each Season will still last 4 weeks but players will now only move between Leagues at the end of each Season and Division changes can occur after each Event.

Upon entering the new GAC, Players will be granted a starting Skill Rating based upon their Galactic Power. Initial seeding of League and Division is then based upon this Skill Rating. After that point, Skill Rating will only be updated through Wins and Losses during a GAC.

Your Skill Rating will be adjusted after each event and the group of opponents you face will be matched based on your Skill Rating. All players that finish the season in the Division 1 (the top 10% of the League) are promoted into the next League up and players in Division 5 of their League (the bottom 10%) will move down. (NOTE: You will not face another player outside of your League)

Our goal with these changes is to build a better playfield where all players compete against more appropriate opponents to create better and more exciting match ups while reducing the incentives for sandbagging or joining and not participating. This new matchmaking system will improve over time as it more accurately reflects your skill with your given roster after an event or two, but ultimately, Kyber League should represent the very best players in the game who use their squads to their fullest. 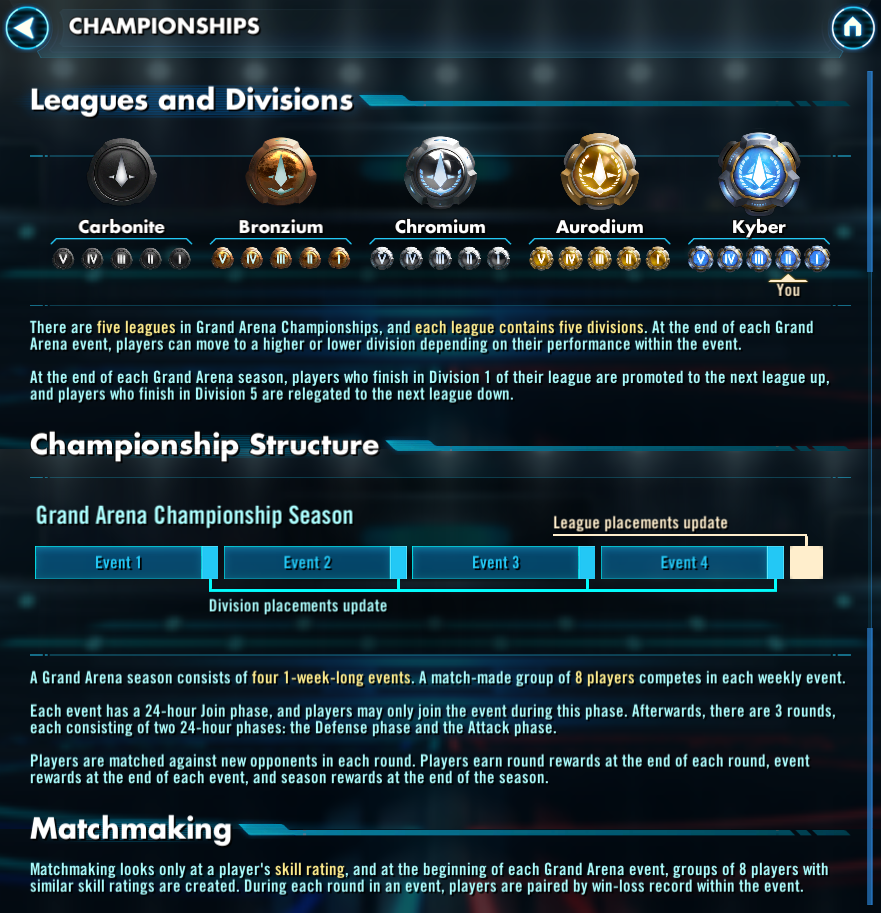 SCORING CHANGES
As part of these changes, we will also be adjusting how scoring works in Grand Arena. The most significant change is that Feats will be removed and no longer play a part in Division and League promotions. Who gets promoted up the ladder will be strictly based on the player’s performance in the event itself. The rewards for Feats will be moved elsewhere in Grand Arena, more on that below.

We will also be making some changes to how players earn Banners to encourage players to be aggressive and fight on the map.
Scoring Changes: 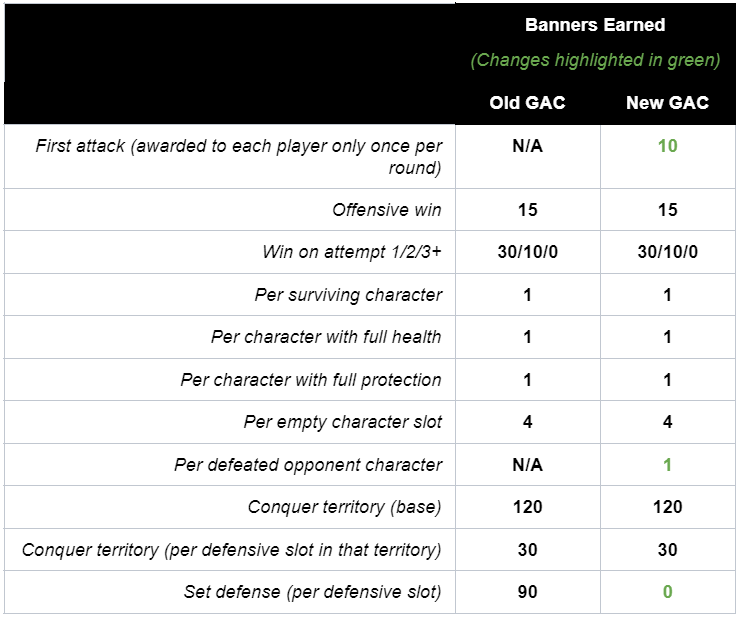 Players will also need to achieve a minimum number of Banner to earn rewards at different stages of the Tournament. 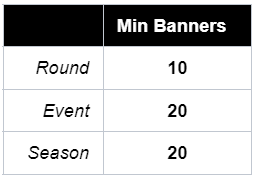 Each Reward type is broken out in greater detail below, but here is the overall Crystals players will earn under the new system: 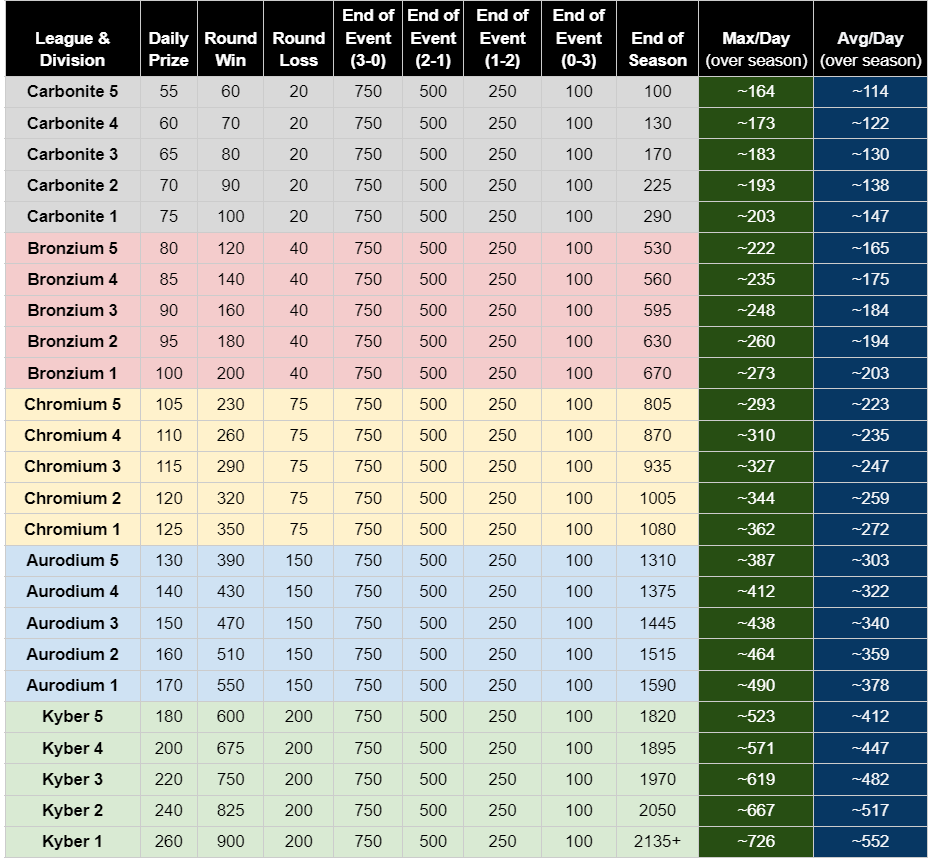 Approximated Daily Averages above are based on the typical GAC cadence of 4 Weeks On + 1 Week Off, eg Total Prizes / 35 Days.

Daily Reward
With Crystals moving to this mode, it is important that we keep the daily reward cadence and not require players to wait a week to receive all their rewards. The new daily rewards from Grand Arena are based on your current League and Division, and will update whenever you change League and/or Division. These rewards continue to pay out between events.

Per-Round Prizing
As with the current system, the Winner and Loser receive prizes at the conclusion of each of the 3 Rounds in an event. These rewards differ by League and Division and now include Crystals. Round wins become increasingly important at higher Leagues and Divisions, ensuring each victory feels more rewarding at this harder level of competition.

As this prizing is the same in all Leagues and Divisions, Players who were previously in lower brackets should see additional prizes, particularly Gear, from this prize type.

Crystals from this prize type are particularly significant in lower Leagues and Divisions, where they make up a larger share of total Crystals available. This is intended to help strong Players in these leagues feel rewarded and able to accelerate vs. their immediate peers. 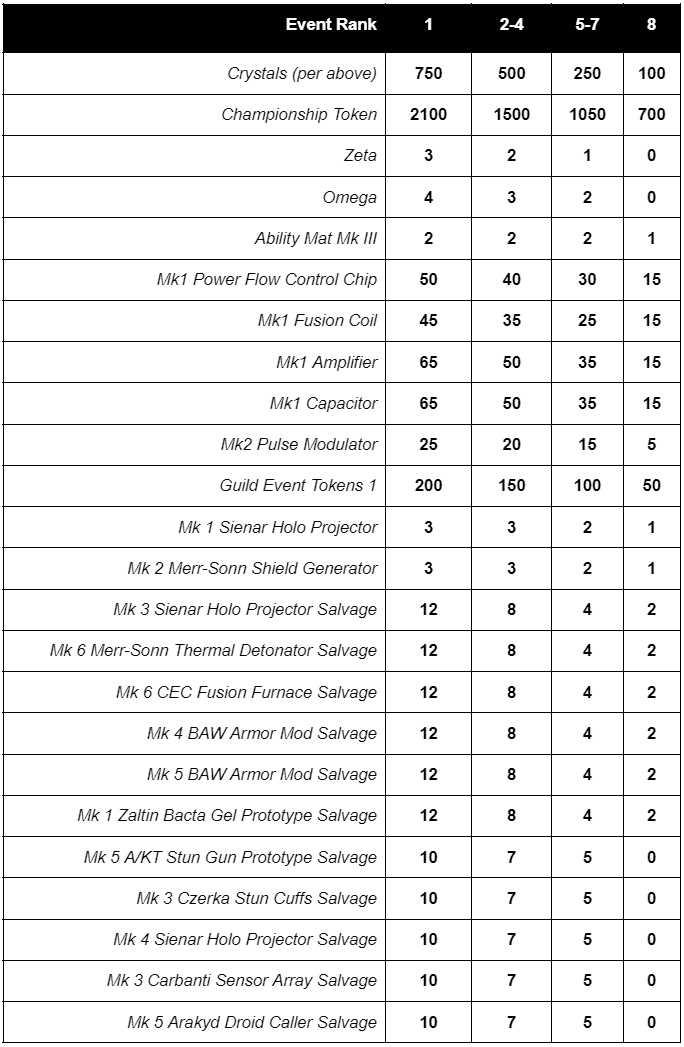 End of Season Prizing
End of Season prizing has been updated in format to reflect the changes to Leagues and Divisions, as well as adding Crystal Prizes. (Note: Some Championship Tokens were moved to Event prizing to more equally reward 3-0 Players of varying power).

Kyber Division 1 sees additional by-Ranking prizing to reflect competition at the very top of the ladder. 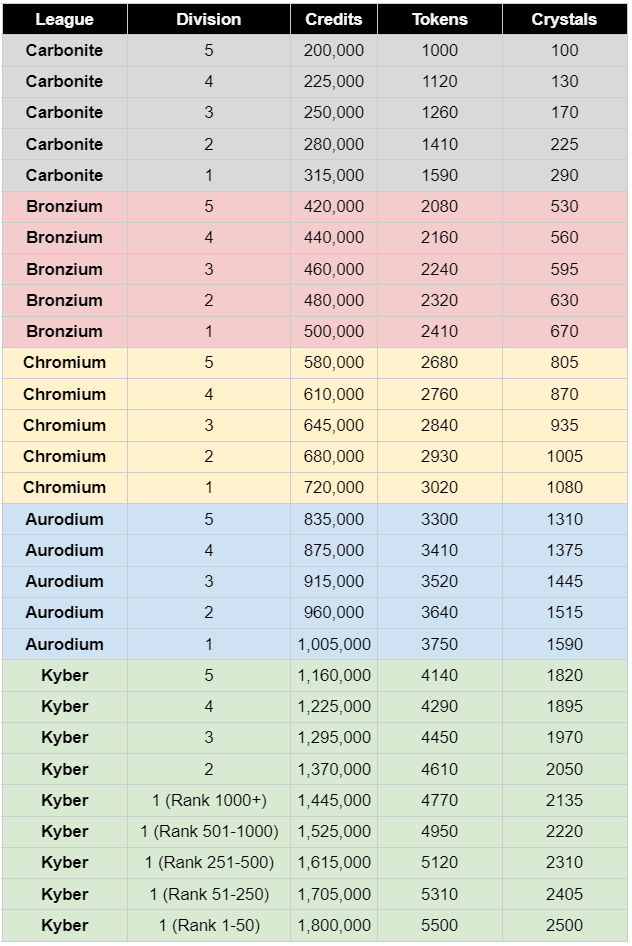 WHAT’S CHANGING FOR SQUAD ARENA
While Squad Arena will no longer provide Crystals as rewards, this mode will still be a valuable mode for many players to engage in. Squad Arena now has a focus on helping lower-power Players get ready for Grand Arena. To this end, Squad Arena Shipments now contain earlier Gear for Squad Arena Tokens that is disproportionately needed by newer Players (existing Squad Arena Shipments remain unchanged). We expect players to “graduate” their focus to Grand Arena as soon as it is available but the additional Gear from Squad is still valuable for building up your roster. 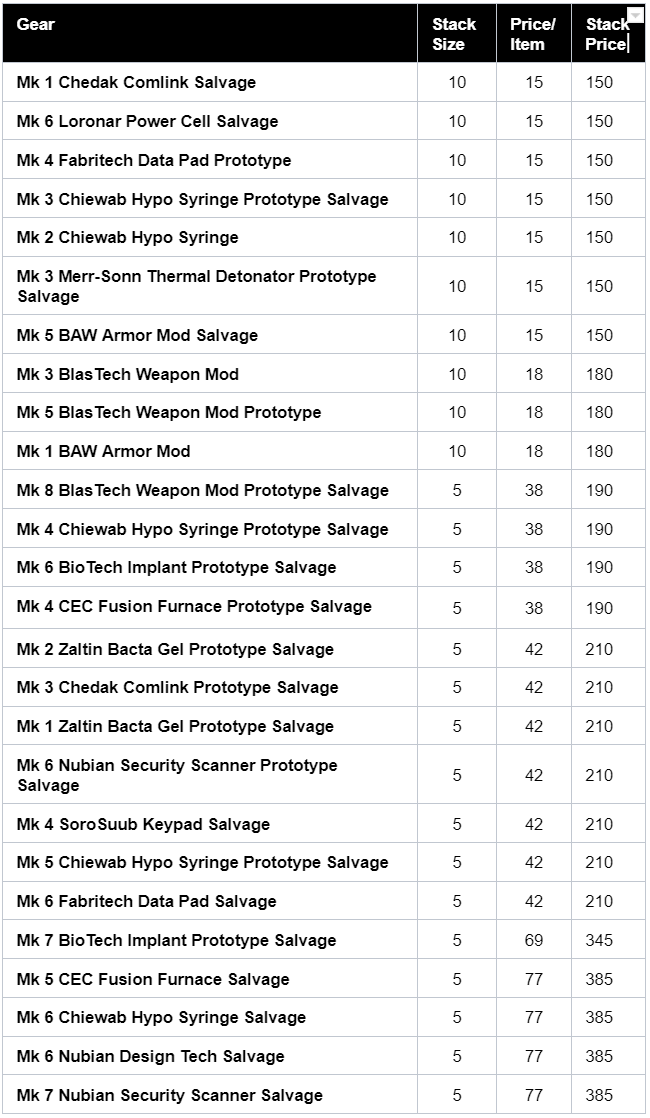 Additionally, as Players who are below 85 cannot access Grand Arena, Daily Activity Rewards for Players below 85 have been increased by +50 Crystals (NOTE: level 85 Daily Activities do not have this addition). Upon reaching level 85, a Player is immediately given a Skill Rating and placed into GAC Leagues -- which have a minimum Daily Prize of 55 Crystals.

HOW WILL THIS CHANGE MY EXPERIENCE?
I’m sure there will be a number of questions along the lines of, how does this impact me and my daily gameplay? At a high level, the average player participating in Grand Arena should earn around the same Crystals or slightly more than before these changes but there will still be an incentive to reach as high of a league as possible to increase the amount of Crystals that you can earn daily.

For players who aren’t ready for GAC, Crystals rewards below level 85 will now be available from Daily Quests.
This will be close to the same inflow of Crystals that you would have received previously on average from Squad Arena.

Note that there are many ways that players can reach a given Galactic Power. One player might have a very broad roster and another might have a streamlined roster with a Galactic Legend. Because of this, in previous GAC's players might face mismatched opponents. In this updated GAC, Skill Rating will rapidly update over time allowing for more balanced battles. However, please note that it will take a few runs of the new GAC to balance out the system.

In terms of Crystal Rewards, many Players will see a general improvement in Crystals earned. For New Players, Grand Arena now gives a larger number of Players a clear path to growth. Existing High-Power Players should see similar rates on average, with an increased “ceiling” of potential maximum prizing.

Additionally, when these changes launch, Players who had a High Squad Arena rank for their age (eg. reached the same GP in less time) should be able to perform well vs. their initial by-GP-seeded Peers. These Players should see more toward “max” prizing in initial seasons, and likely then promote to higher-rewarded Leagues. 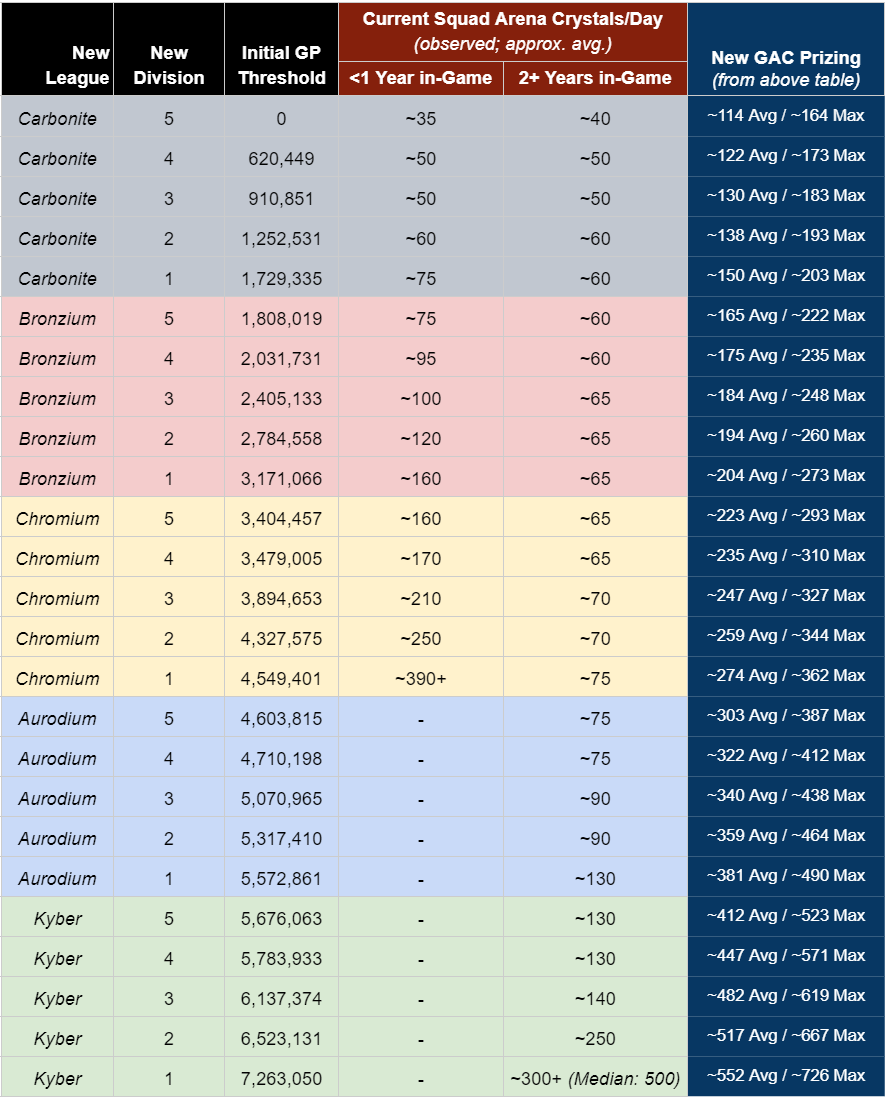 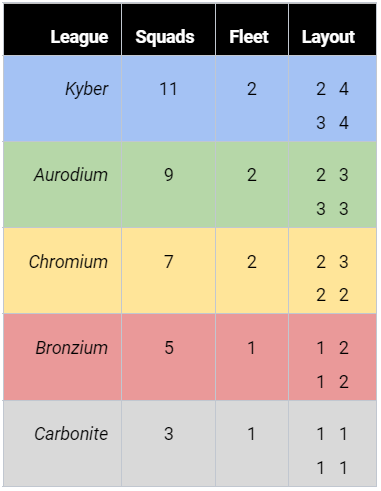 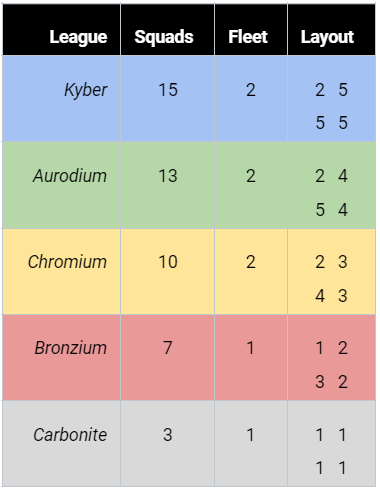 CLOSING
There are many details to digest around these changes as we seek to reinforce that Grand Arena Championships as THE competition in Galaxy of Heroes to rank and reward the players who best use the strongest rosters in SWGOH. Most importantly, we want to give Grand Arena participants an exciting fight against your true peers that you can win if you fight hard enough. We expect there to be a number of questions about the nuances so we will be hosting a Q&A dedicated to these changes to answer any questions from you on December 2nd. There will be a separate post tomorrow with more Q&A details and where to submit your questions.

Thank you for reading! We will see you on the holotables and at the Q&A later this week!