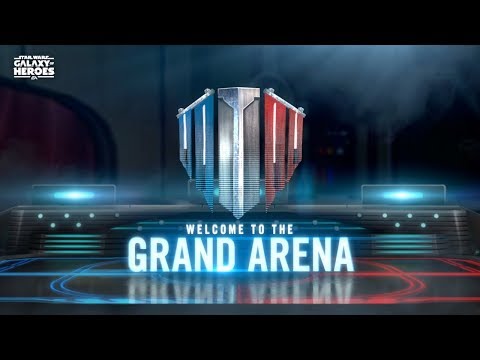 We are excited to announce the first event of Grand Arena starts today so read on to find out how to join in the competition and earn some fun rewards!

Our first Grand Arena event is a 1v1 event with a single round. You’ll be matched up against a player of a similar GP and have 24 hours to beat as many of your opponent’s teams as possible. At the end of the Attack Phase, each player’s Banners will be counted up and the one with highest score will win the round! (See the breakdown of how to earn Banners below)

Please note that events in Grand Arena events will most likely vary is structure and length. We would love to hear your feedback on experiences and which you prefer over in the Grand Arena Megathread.


How To Participate:
After the Preview Phase you will have 24 hours to setup your characters to defend your map much as you would in Territory Wars.

Next up is the Attack Phase, your goal to to beat as many teams as possible while not losing in your own territory. Don’t put all your squads on defense! You need to save some of your best squads to cut through the competition.

Most importantly, how do I win? Each round’s winner will be determined by the total number of Banner’s earned in that round. You can win Banners by beating your opponent’s teams but the better you do, the more Banners you will earn! See a complete breakdown of how Banners are earned in the table below. 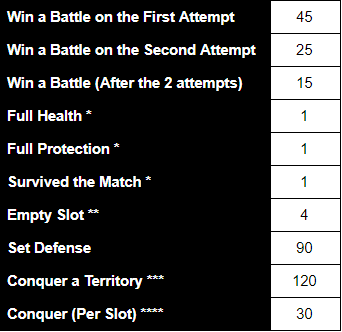 *Scored for each unit on your team that meets this criteria at the end of battle
** For squads with less than 5 units when entering a battle. Per empty slot
*** Defeat all Squad in a single Territory
**** For each Squad slot defeated in a Territory, only awarded after a Territory is completely defeated (Added to the total Conquer a Territory score)

The number of squad per territory will change based on the GP bracket your groups is in: 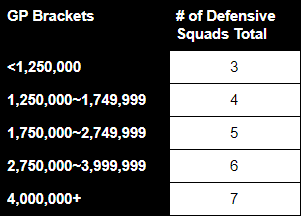 NOTE: You can check your opponent's character inventory and see their current Arena Squad in the Event Rewards tab by tapping on your opponent 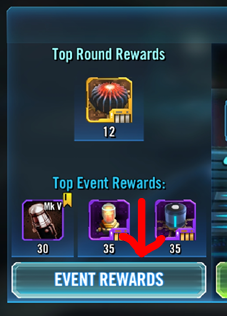 Rewards
What do I get for proving I’m awesome?!? Grand Arena will reward you in a variety of ways for just participating but there are bigger prizes for winning an event. First off, you’ll earn 100,000 Credits for each battle you win on offense so make sure you finish every battle you can. The structure and rewards for Grand Arena events will change in the future but for this short Exhibition event, you will receive the following for winning (1st) or losing (2nd).

This reward structure is only for this exhibition run of Grand Arena and will change with future Grand Arena events. A typical grand arena will take place over several days, and will have commensurate rewards. This first one lined up to start on 12/6 is a single round of the event and therefore the rewards reflects the shortened time frame. Future events will have different structures and could include formats such as 3v3, Fleet battles, or a whole host of other competitive ideas that our developers may come up with!

We hope you enjoy this new game mode and are excited to see how it evolves in the future.
Good luck out there on the Holotables!
Post edited by CG_SBCrumb on December 2018
18
Reply to this topic
This discussion has been closed.