Feats are, simply put, limited-time Quests to complete during a Grand Arena Championship for bonus Championship Score and new Shipment tokens. The most important Feat at launch is for League Promotion, where claiming a Feat for getting promoted will award you crystals as well as a steadily increasing pile of gear salvage. Most other Feats are associated with Grand Arena, Squad Arena, and Fleet Arena prowess, and we think there are a lot of other ways we can build out Feats to include more and more activities (including PvE content) in the future, after seeing how players interact with the feature. 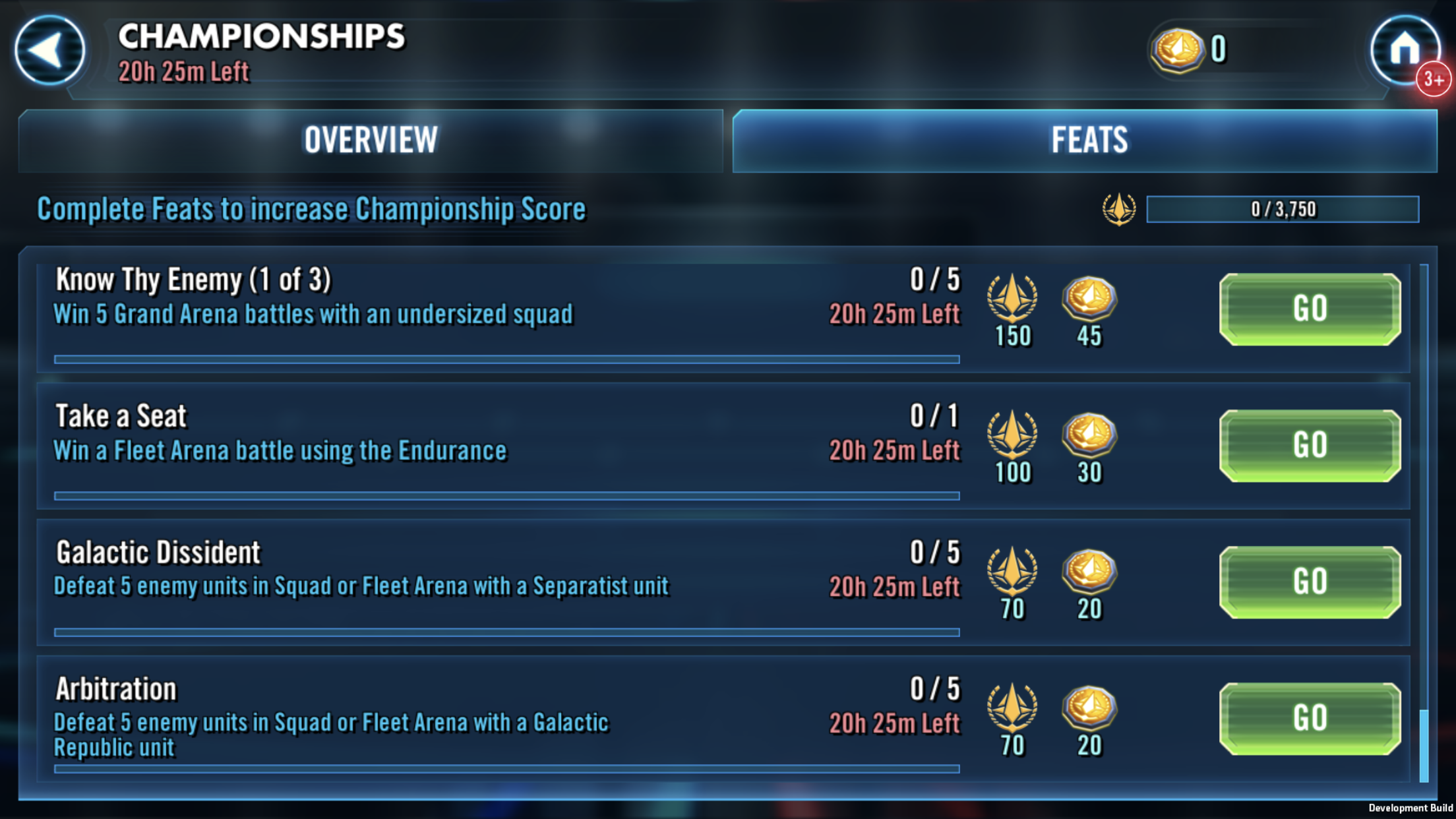 Why feats? Well, Grand Arena Championships are five-week long events, and we know that you don’t always best your opponent. Feats were added as an opportunity for you to continue to work on your Championship Score and be able to keep working your way up the Leagues, or to a higher Leaderboard position, regardless of your Grand Arena win-loss record or banner count.

Feats are on a timer and must be claimed before they expire – it isn’t enough to pull off that Clone Trooper victory in GA, you have to collect your rewards like you would a Daily Activity. New feats will be available every few days, so please keep an eye on Championship Home for a badge on the Feats tab indicating that new Feats are either available or ready to be claimed.

For now, Feats contribute only a small percentage towards Championship Score – before we start to add additional Feats content and increase its importance, we want to make sure that we have the chance to get some feedback on how winning, earning Banners, and Feats interact, as well as the nature of the challenges we set out for players.

Bragging Rights
Part of Grand Arena Championships is the ability to show off your excellence! In addition to your Player Profile being updated to show your League and Leaderboard rank, we’re also going to be awarding titles and portraits in Championships, and we will be looking at other “vanity” options in the future.

For now, all players who participate in our first couple of Championships (we’re referring to them as “Exhibition” – more on that in a follow-up post) will receive the unique title “Championship Vanguard”. Once we get out of exhibition season (more on our schedule in a follow-up post), you’ll be regularly seeing portraits and titles in rewards for achievement and participation.

Stay tuned for the next Grand Arena Championships post, where we’ll talk about GP Divisions and Leaderboards!

25
Reply to this topic
This discussion has been closed.