How I went through Rey’s hero Journey (JTR minimum requirements)

I am making this thread to give some insight of how I prepared and went through Rey’s Hero Journey, since it was an event I really anticipated. I did not find a whole lot of information on this event, so I will try to be as exhaustive as possible to help anyone who would like to know what the requirements for this event are. Be prepared for quite a long post.

Here, I will join some screenshots (from swgoh.gg) of the team I used to complete the events (with details on mods / stats). I you want the main takeaways from those, here are some information:

Rey, Finn and BB-8 are worth investing gear on, because they are pretty usable (at the moment) on other areas of the game. You really should not gear past 8 the Smugglers, because they are not going to be used elsewhere.

My mods where pretty random, I just put what I thought would be the best / what I found on the internet in term of primary stats and bonus. 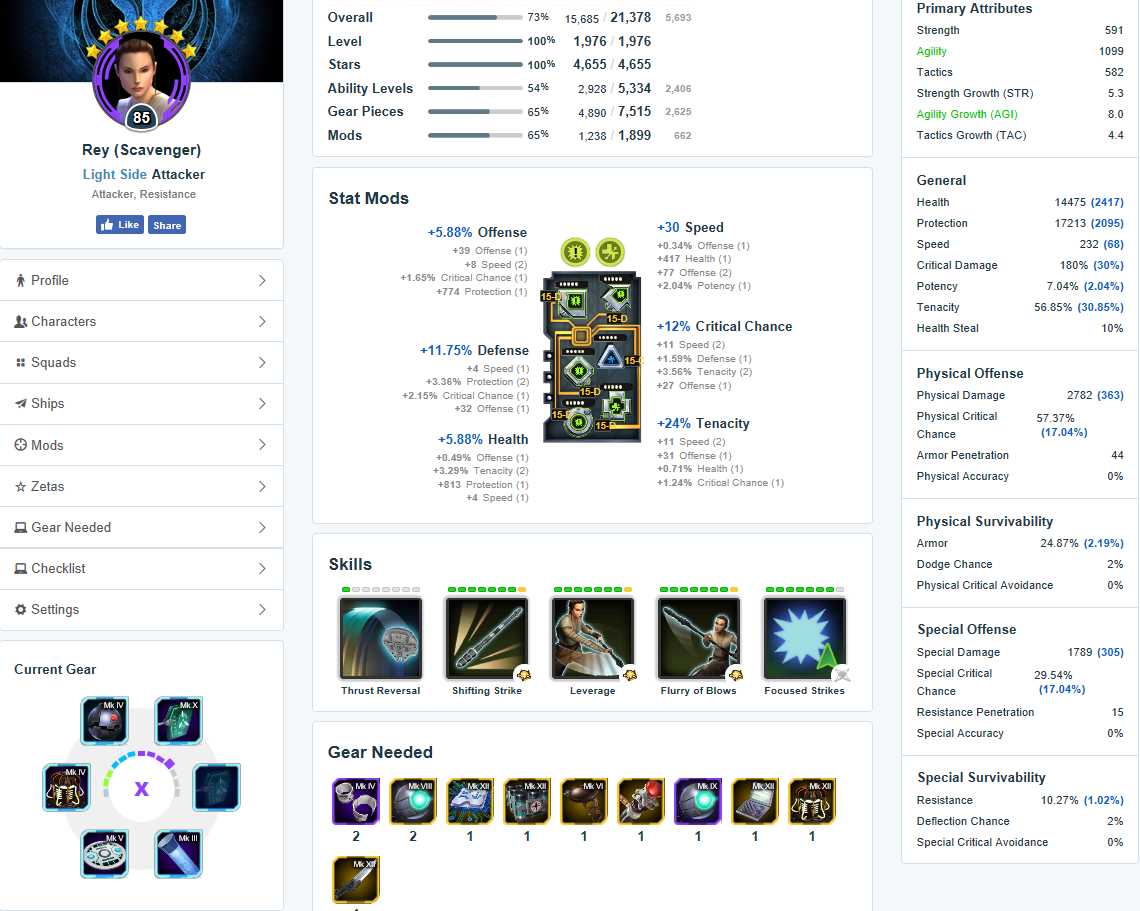 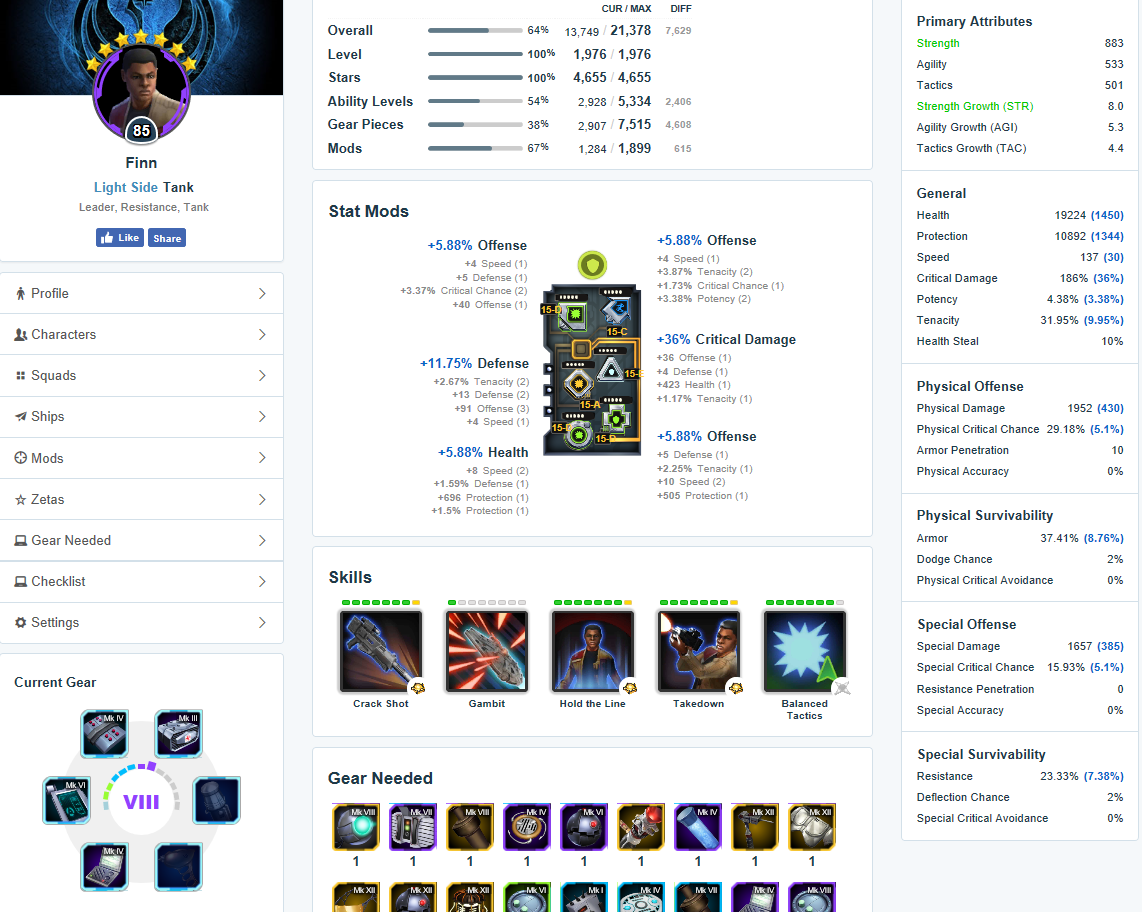 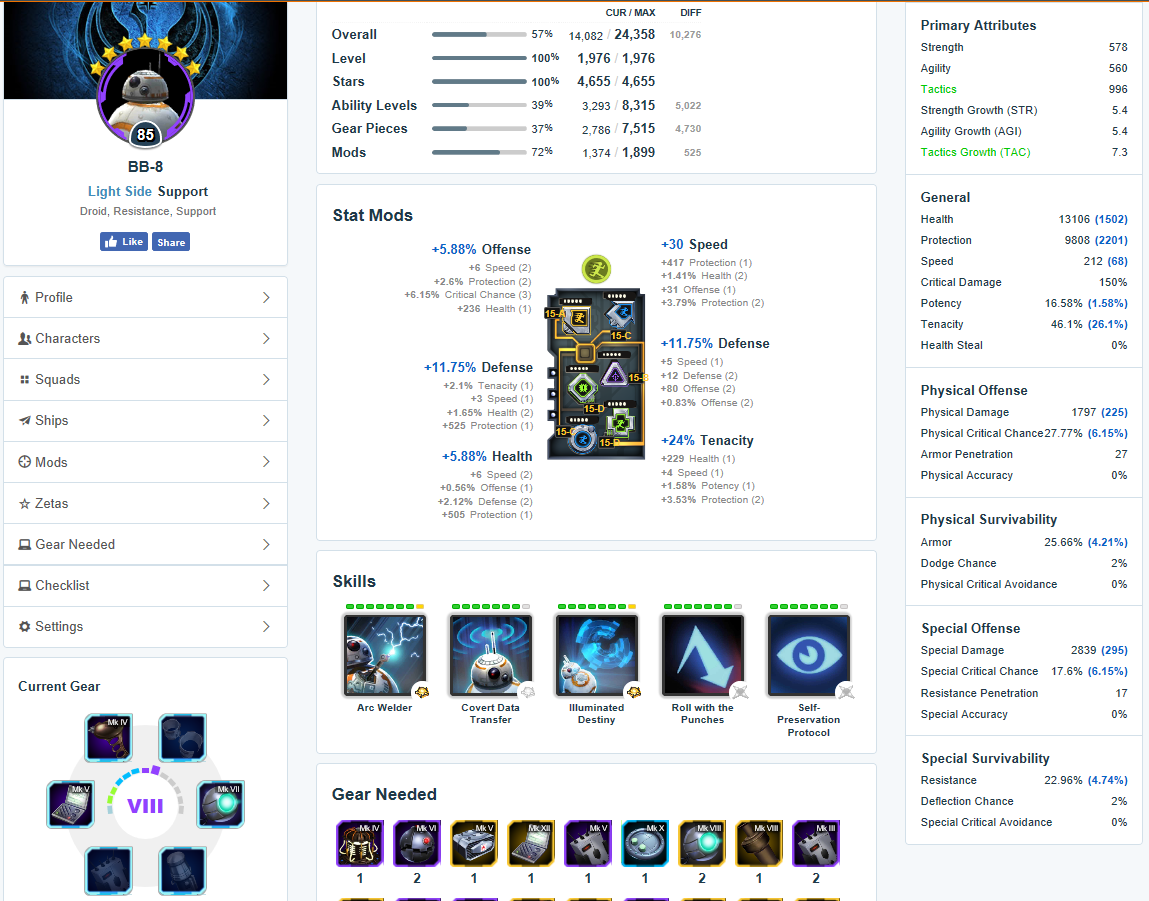 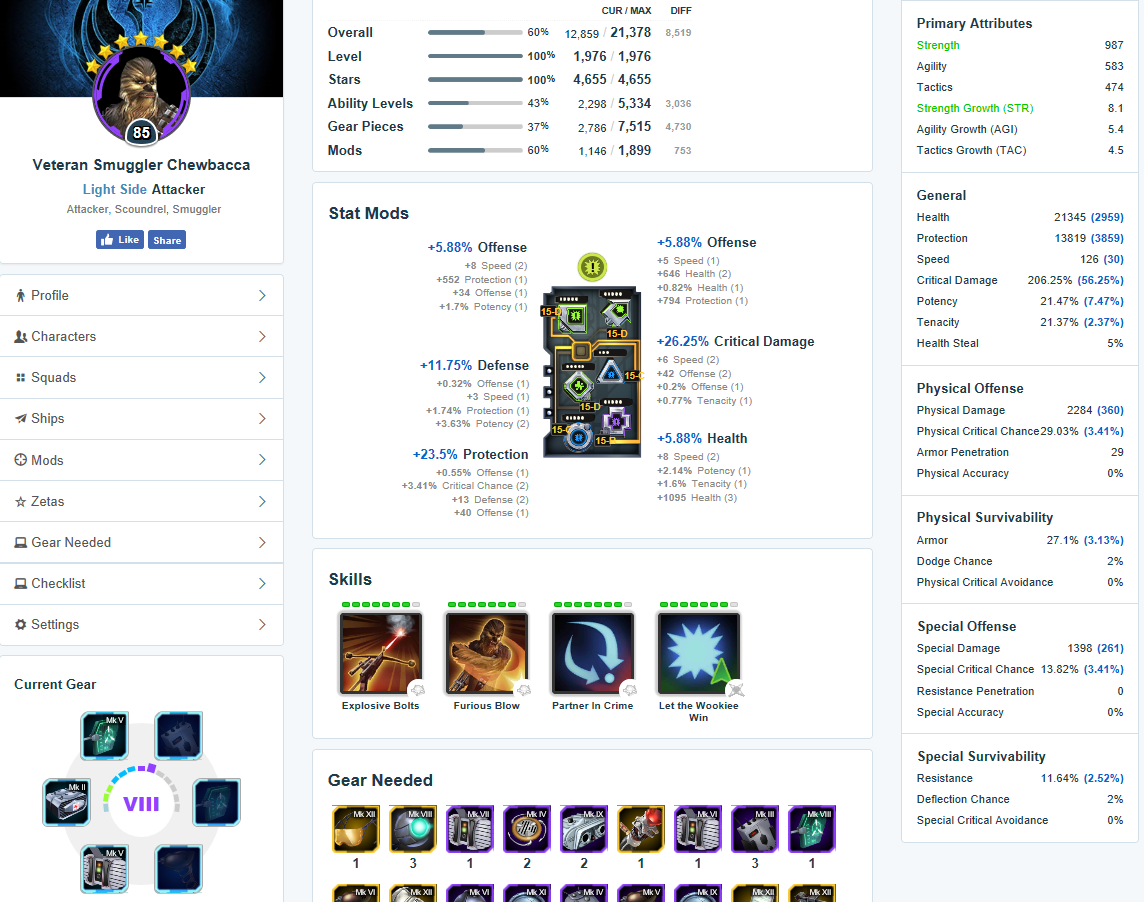 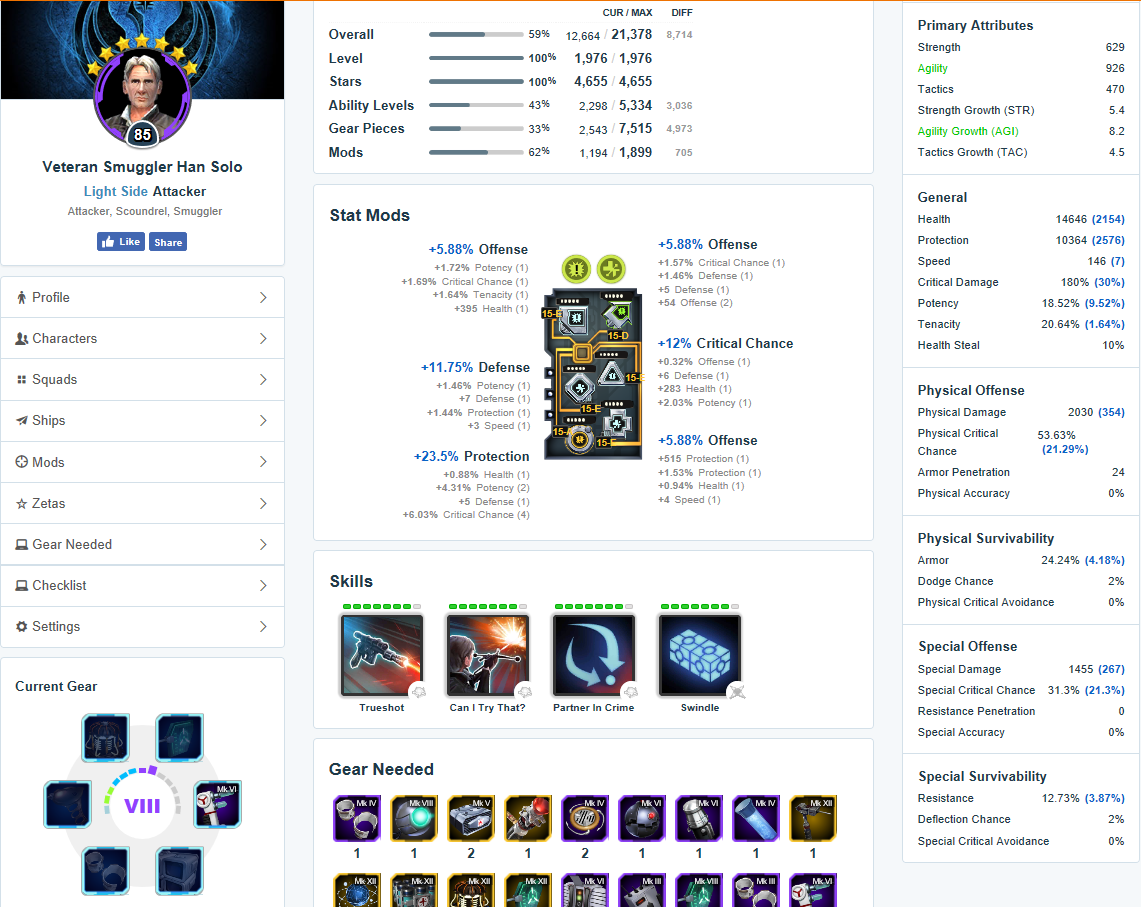 So just that you know, the most difficult levels of the event are supposed to be III (3), IV (4) and V (5). As the first two are very easy, and the two last are very cinematic, I am just going to focus on those ones. Please note that this was my logic during this event, as I went blind on what were the waves and what would happen (I only looked at requirements and gear levels). It is ok if you don’t agree with my kill orders or my strategy, you can just give yours to try to help as much as possible anybody coming to this thread.

This level was very easy. Enemies do not have a very high speed, so you won’t need a lot of speed on your 3 characters that are Finn, Han and Chewie (as you can see on the screenshots, my Finn and Chewie are +30 speed, and Han is only +7). Last wave is a bit faster, but you can manage it without crazy speed (they are not doing much damage). Because of how my team is modded, Chewie did a lot of work, criting for other 12K, and Finn did ok damage, but was mostly useful to stun enemies. Han counter attack was also very helpful. Finn tanked majority of the damage, finishing full health and no protection. Han took some but Chewie did not take a lot.

This stage really should not give you any trouble, as described in the previous paragraph. You can probably do this one at full gear 8 with no problem.

This level was also very easy. Most of the stage only have 2 enemies, and since you have some loaded TM after the first wave, it is quite easy. My Rey is pretty decently geared and modded (Gear 10 and + 68 Speed) so she did most the damage. I could potentially be harder at lower gear level at the last wave, since you have multiple shielded stormtroopers, but it shouldn’t give you much trouble. Speed is not a huge problem here either, it is quite easy to manage. The last wave is a bit harder, with 6 enemies, but focusing on Tie Pilots (main damage dealers), Officer, Stormtrooper and Shield was my kill order. Try to stun the Shield, but it should not be too much of a problem.

This is the big one, the one you could potentially be stuck at. It is quite RNG dependant, but not as much as last stage of Thrawn (the only one I can think of since I haven’t done Chewbacca event or C-3P0). Let me get this straight: enemies are much faster on this stage than on the previous one, it is pretty massive. However, it is not impossible to overcome. If you struggle, some good arena mods should do it. My Rey was faster than them (or at least fast enough), and she only had +68 Speed (which made a total of 232 Speed. Finn and Chewie don’t have to be that fast, but if you can bring them to around 200 speed each, it should be fine (if you think they are too slow / if you struggle too much).

It took me at most 4 or 5 tries to complete it. Here is what I went for:
- 1st wave: only 3 enemies, 2 Stormtroopers and 1 Officer. I kill the Officer first with my Rey, and handled the other 2 after, trying to get as few as possible counter attack (using stun, daze and powerful attacks). If possible, make it so that not only one character is taking all the damage (for some reasons, in previous runs, Finn was being focused and could lose all his protection before the next wave. You do not want that to happen).
- 2nd wave: 4 enemies (if I recall well), 1 Stormtrooper, 1 Officer, 1 Shield and 1 Tie Pilot. I killed the Tie Pilot first, because he was the main damage dealer. Then I focused on the Officer and the Trooper, and finally the Shield. Try to stun the Shield if you can, and deal massive damage. Finn tanked most of the damage, lost all his protection by this point, but was full health. If he gets killed, next wave is going to be very hard (nearly impossible for me). Try to have at least Chewie’s stun for next wave, and Finn taunt / heal.
- 3rd wave: 4 enemies, 1 Stormtrooper, 2 Tie Pilot and 1 Shield. You will get stun a lot, that is why I went for tenacity cross on Rey, since she is the one that does all damage for me. I went for the Tie Pilot first, then Stormtrooper and Shield. Finn died by the time I killed the second Tie Pilot, and Chewie died just before I killed the Stormtrooper. It was then a 1 vs 1 between my Rey and the Shield: my Rey was pretty much full health / no protection. Since my Rey was pretty fast, she would usually take 2 turns before the Shield, and would not get stunned with some tenacity, so I was able to win.

Basically, you shouldn’t lose on the first two waves, but they are here to prepare you: just try to not lose too much protection / health and try to have you abilities ready for the last wave. I would say that if you cannot complete this stage within 20 try, you need to change your mods / upgrade your characters gears (focusing on Rey and Finn since they are the ones you would put in a potential JTR team)

Conclusion on the event

I took more than a year off this game during 2018, and when I came back, I continued to farm the Vets (was like 80/100 shards of Chewbacca and 0/65 shards of Han). Before I left, JTR was a high tier character (probably higher than today), and I really wanted her, so I went for her anyway after I returned.

This event was really easy for me. Most of the information I found on the forums / Reddit / YouTube was before Finn rework, or was a bit incomplete, so it was hard for me to know if I were ready in terms of gear (I collected my last shard of Han 2 days before the event started). I think I should not have put Gear 8+ gears on the vets, since I probably will not use them anymore. However, I will keep gearing Finn, Scavenger Rey and BB-8 (and of courst JTR), because I like those characters and will use them in TW, GAC or Raids. But the point of this thread it to show you that you don’t need gear 12 and zetas to complete this event. It is very doable for people that don’t have that many resources to put on a crazy amount of characters (I am and was always focusing on Jedi, long before JKR). The most important thing is to have some ok mods (with speed, it makes everything easier, but you don’t need crazy speed) and to focus on the bets / most useful characters that you will not regret investing your gears on.

I really hope this would help someone in his or her preparation for this event. And I hope you will get your JTR and enjoy using her in your squads!