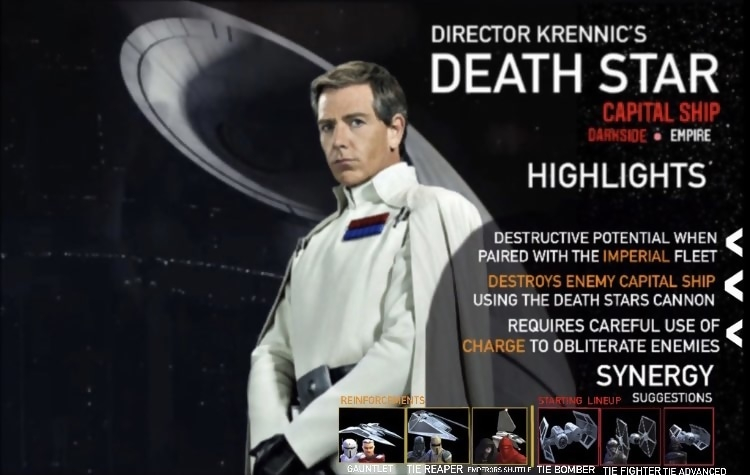 Gain 3 stacks of Charge. All allies gain Retribution and Offense Up for 1 turn, doubled for Empire allies. A random Empire ally is called to assist, dealing 10% more damage for each stack of Charge the Death Star has. Empire allies gain 25% turnmeter.

Charge: Max stacks 8. At 8 stacks, gain access to the ability Fire when Ready. Cannot be dispelled, copied or prevented.

At 8 stacks of Charge, gain access to this ability. Destroy enemy Capital Ship, dispel all buffs on enemies, and grant allies 50% turnmeter, doubled for Empire allies.

Once used, lose all stacks of Charge, and this ability cannot be used again for the remainder of the encounter.

Whenever an Empire ally defeats an enemy, the Death Star gains 1 stack of Charge, 2 for Rebel enemies.

Reinforcements ignore Taunt on their first turn.
~ A Message From Me ~

Hey everyone! So here is my Death Star kit, I am very proud of it and it was surprisingly difficult to make. I designed it to truly test the player's tactical skills, so for those who enjoy a good kit to think about, this is for you! I will describe the kit in detail, and address any issues that may arise, so here goes!
~ What is this Kit? ~

In summary, this kit is a highly supportive capital ship that if used correctly can provide game-changing bonuses to the Imperial Fleet whilst building up to it's devastating ultimate. Using Charge effectively is the key to this kit; will you go straight for the ultimate, destroy their capital ship, but leave your allies with little support, or build up your stacks of Charge slowly, drawing out the battle and giving your fleet a massive advantage over the enemy?

-The Death Stars basic gives allies a fighting chance with Retribution and Offense Up, calls an Empire ally to assist dealing a potentially high amount of damage, as well as starts to build up the Death Star's huge damage potential.
-Oh It's Beautiful is an essential, and cheap, ability that supports allies as well as slows down the enemy.
-That's No Moon... is the Death Star's 3rd ability, and is it's only directly offensive ability, dealing damage to all enemies, using 2 stacks of Charge.
-Fire When Ready speaks for itself; Destroy the enemy capital ship, and render this ability unusable for the rest of the battle. Empire allies gain a huge advantage through this ability, gaining 100% turnmeter to attack enemies who have had all their buffs removed.
-Imperial Propaganda provides Empire allies with strong bonuses, and a recovery plan when they start falling below 100% health. It also gives the Death Star an opportunity to gain Charge quickly as enemies fall.

This kit will test players' ability to form master tactics and manage their fleet effectively.
~ Problems You May Have ~

So I know there may be some questions you might ask, such as visually how the Death Star fares, or the choice of pilot, so I will answer a few here and if you have any more feel free to put them in the comments!

-Pilot choice: Krennic
a) As Vader, Tarkin, and Palpatine are all taken up in their own ships, so Krennic is the best choice.
b) This kit is based off the Rogue One Death Star, which doesn't make much difference really.
c) Why is my boy Krennic so underrated?! Give him some love haha.
-Visually, the Death Star will show about 1/4 of the station in the top left/right corner of the screen, passively showing the main laser cannon dish. When the Death Star uses it's Basic and 1st Special ability the dish pulses with a green light along each inner rim, and the usual buff application animation is shown on the fleet. For the 2nd Special and it's ultimate, the obvious green laser shoots out, the former ability showing a brief and smaller beam, and the latter a large blast that destroys the enemy Capital Ship.
-Yeah, this is a 3rd Empire Capital Ship. But who knows how ships are going to turn out in the game? Maybe they will end up big enough for 3 Capital Ships of each major faction. And anyway, this is just a concept kit!
-I don't believe this kit is overpowered; it has a very 'make your own path' feel about it, with many different strategies, and easy ways to slip up bigtime. The kit is designed to test you, to make you choose either cripple the enemies support but leave your allies exposed, or support your allies to push them to a drawn out victory.

So here is my Death Star kit! I hope you like it, I've put a lot of thought into this one.
~ Long Live The Empire! ~