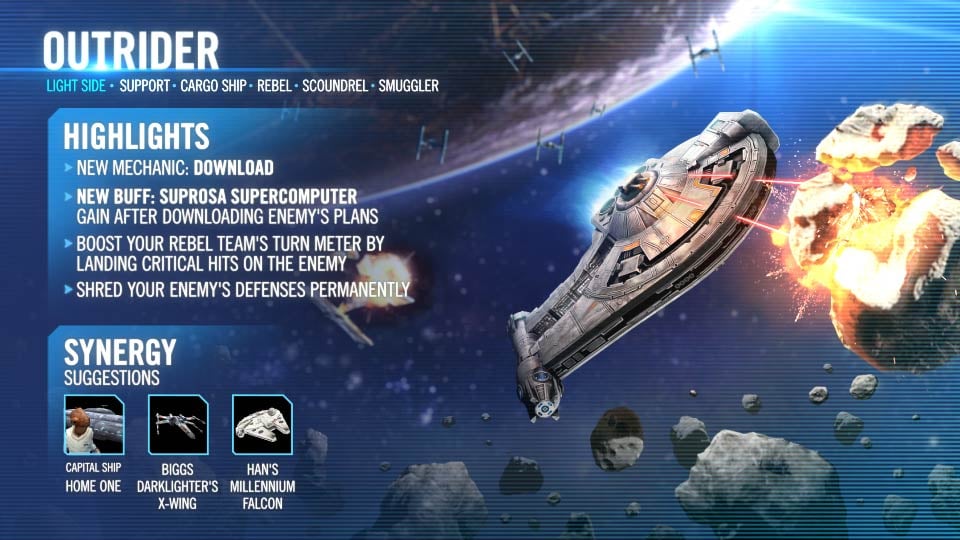 The Outrider, Dash Rendar's YT-2400 freighter, will soon be coming to the holotables and will lift Home One fleets. For those of you who are unfamiliar with this ship, it was originally introduced in Star Wars: Shadows of the Empire on Nintendo 64 on December 3, 1996, and later for Windows on September 17, 1997.
The introduction of this ship brings a few new mechanics to Galaxy of Heroes which we think are exciting: Data Transmission “Download” and new buff “Suprosa Supercomputer”.
Below, we take a dive into the developers’ motivations and inspirations while creating the kit for this new ship.

Can this ship enable a Home One led fleet to one-shot the Executor?

No, but it should help it hold its own against many other fleets it couldn’t previously.

How do I get the Outrider?

Outrider is available in a Galactic Chase starting on 4/8. It will be a 4 star unlock.
Why is Outrider a 4 star unlock when StarFortress and TIE Echelon were not?
Outrider is slotting into a pretty well established faction, while StarFortress and TIE Echelon were targeted at the two factions that were in need of dedicated tanks. Galactic Chases should be 4 star unlocks, the previous two were exceptions.
What is the goal of Outrider?
Outrider’s goal is similar to the recent additions of Tanks to Raddus and Finalizer. We aim to boost Rebel fleets and tighten up the second and third tier metas.
Who gains Transmissions?
Currently only Outrider gains Transmissions
Why does the Outrider have the Rebel tag and Dash Rendar does not?
Tags are extremely powerful tools in the design arsenal. Sometimes a unit may be missing a tag that seems extremely logical for it to have, and that is because there is an undesired interaction we can avoid by leaving a tag off. Prior to Outrider we’ve had the Razor Crest with the Bounty Hunter tag, and Mandalorian (Beskar Armor) without.