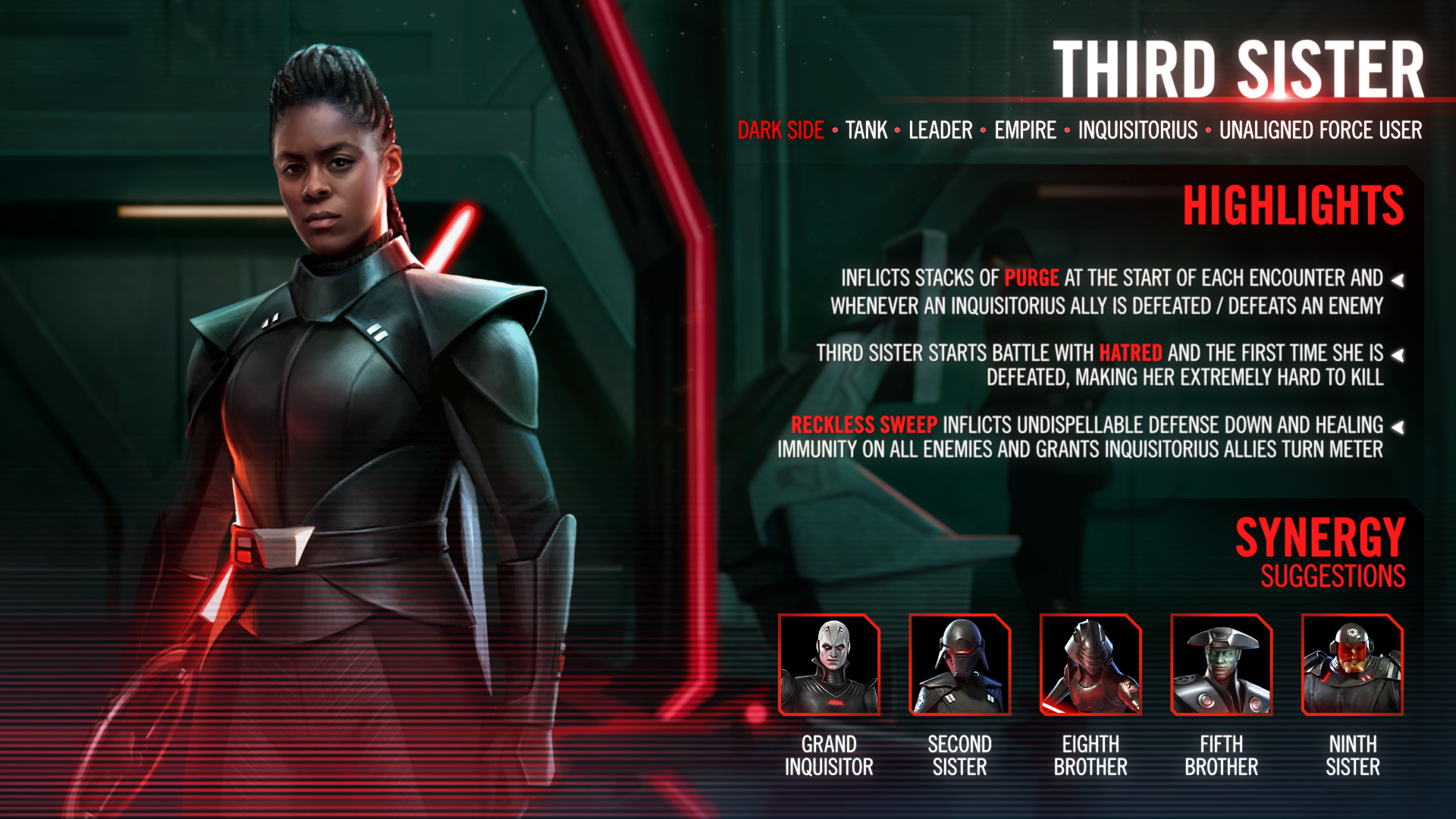 Key Attributes:
Inspiration:
Strategy Tips:
FAQ:
How do I obtain Third Sister shards?
In Phase 3 of the Rise of the Empire Territory Battle, you will need to beat a Special Mission on Tatooine that requires Grand Inquisitor and 4 other Inquisitorius units at Relic 7 to earn her shards for your guild.
Is there a mission that requires Third Sister?
Yes, in Phase 4, Dark Path, she is required at Relic 8 in the Haven-Class Medical Station’s Special Mission.

Final Text: Deal Physical damage to target enemy and inflict a stack of Purge (max 6) for the rest of the encounter, which can't be evaded. If target enemy is already inflicted with Purge, inflict Ability Block for 2 turns and dispel all debuffs on Third Sister.

Final Text: Deal Physical damage to target enemy and recover Health equal to the amount of damage dealt. For each stack of Purge on the enemy, this attack deals 30% more damage. If Third Sister is at full Health after using this ability, inflict Armor Shred on target enemy for the rest of the battle.

Final Text: Deal Physical damage to all enemies and consume 1 stack of Purge from each enemy.

While in Grand Arenas: All Inquisitorius allies gain Critical Damage Up for 2 turns and have their cooldowns reduced by 1.

UNIQUE 1: Driven by Revenge (OMICRON)
Final Text: Third Sister gains 30% Max Health and 30 Speed. Third Sister takes reduced damage from percent Health damage effects. At the start of battle and when she's defeated for the first time, she gains Hatred until she is defeated. Whenever Third Sister is revived, she gains 100% Offense and Defense (stacking, max 200%), and 25% Critical Chance for the rest of the encounter (stacking, max 50%). Whenever Purge is dispelled during an enemy's turn, or when an enemy uses an attack that damages more than 1 ally, all enemies gain 1 stack of Purge (max 6) for the rest of the encounter and Third Sister Taunts for 2 turns.

While in Grand Arenas: Whenever Third Sister is revived from Hatred, the cooldown of Unyielding Onslaught is refreshed, and she gains 100% Offense until her next attack and ignores taunt effects for 1 turn.

While in Grand Arenas: Whenever an ally or enemy is defeated, all Inquisitorius allies gain Defense Penetration Up for 2 turns. Whenever Purge is dispelled during an enemy's turn, that character (excluding Galactic Legends) gains Deathmark for 2 turns which can't be dispelled or resisted.


EDIT: She is a TANK, not an Attacker. The image and copy has been updated to reflect that.
Post edited by CG_Tusken_Meathead on December 2022
2