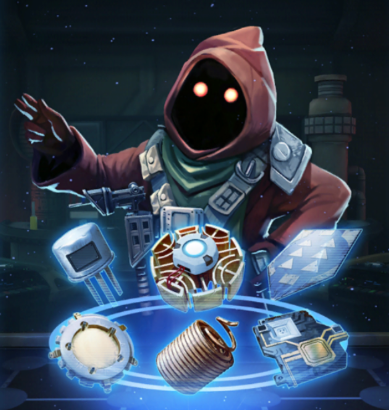 From our Feature Producer CG_154M:

In today’s Relics post, we’re going to be talking about how to upgrade Relic Amplifiers and the upcoming feature we’re releasing to help you do that.

Once you reach G13, as explained in this previous post, the Relic icon is unlocked and starts at Level 0. The Relic Amplifier can be upgraded from Level 1 to Level 7 (at launch). Each upgrade is a permanent power boost, similar in stat space to a star level, except:

In order to help you craft these Relic Amplifier upgrades, we are introducing the Scavenger! He is a Jawa junk trader who has installed the Relic Amplifier on all of your character data cards, and who has brought his new technology to the Cantina. (Be advised - he is a little rough around the edges.) He will help you unlock and upgrade Relic Amplifiers by breaking down unused gear into Scrap, and then combining that Scrap with Signal Data to amplify your characters and unlock new power. 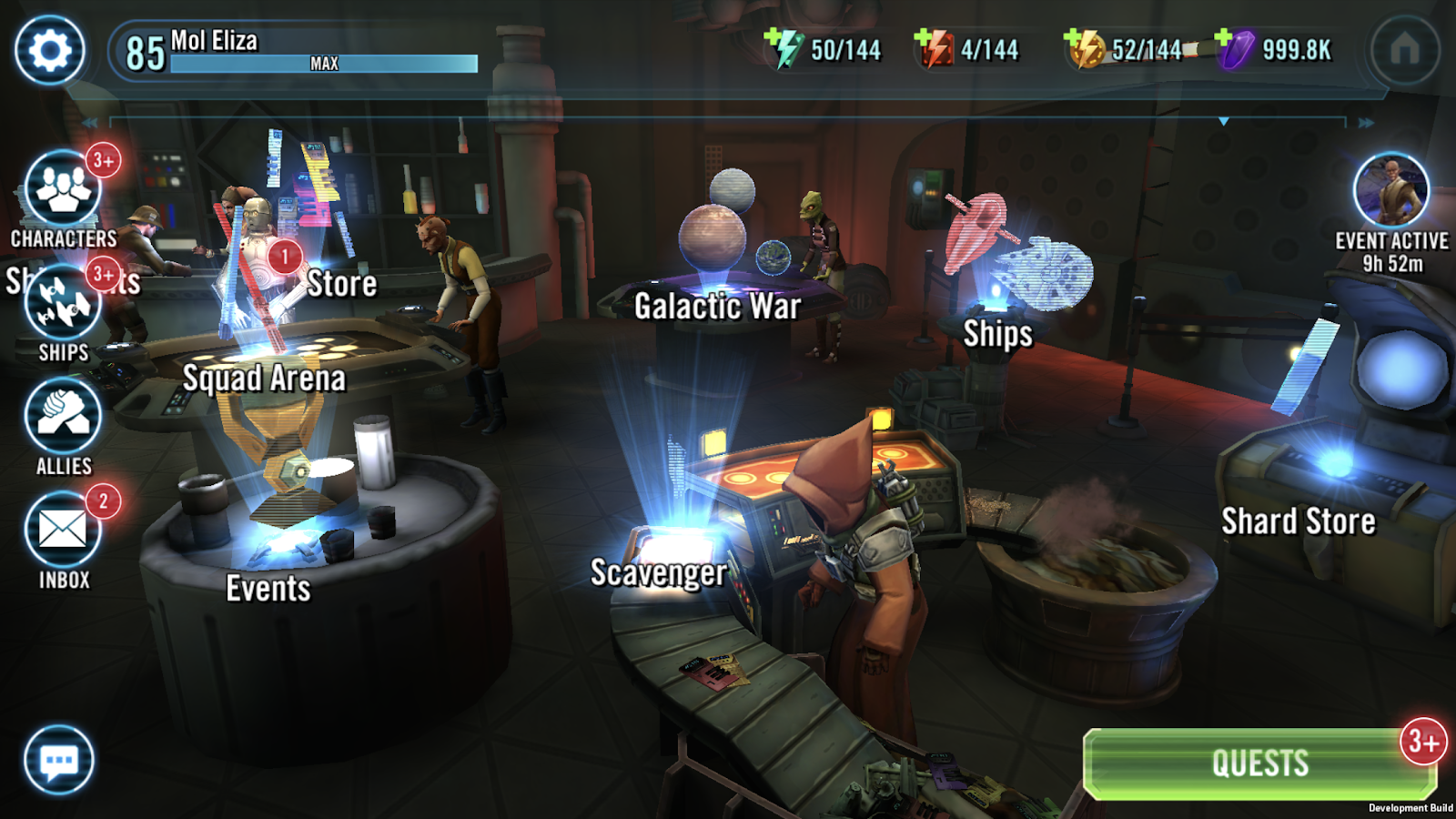 To clarify a bit further - first, Signal Data is a set of new materials that are dropped from Cantina Battle nodes. The number you need will scale as you go up levels, but the intent for the first few Relic Amplifier upgrades is that they can be farmed relatively easily and consistently.

Second, Scrap is a new material type which can be created by the Scavenger table. For now, there are 6 different pieces of scrap output, created from existing gear. Virtually every piece of gear in the game – full, salvage, prototype and component – is an input for Scavenger materials. (Some crafted G12+ and Finisher components are not yet in the Scavenger.) Every piece of gear corresponds to a specific type of new material – in general, the higher the gear, the higher-level piece it corresponds to. 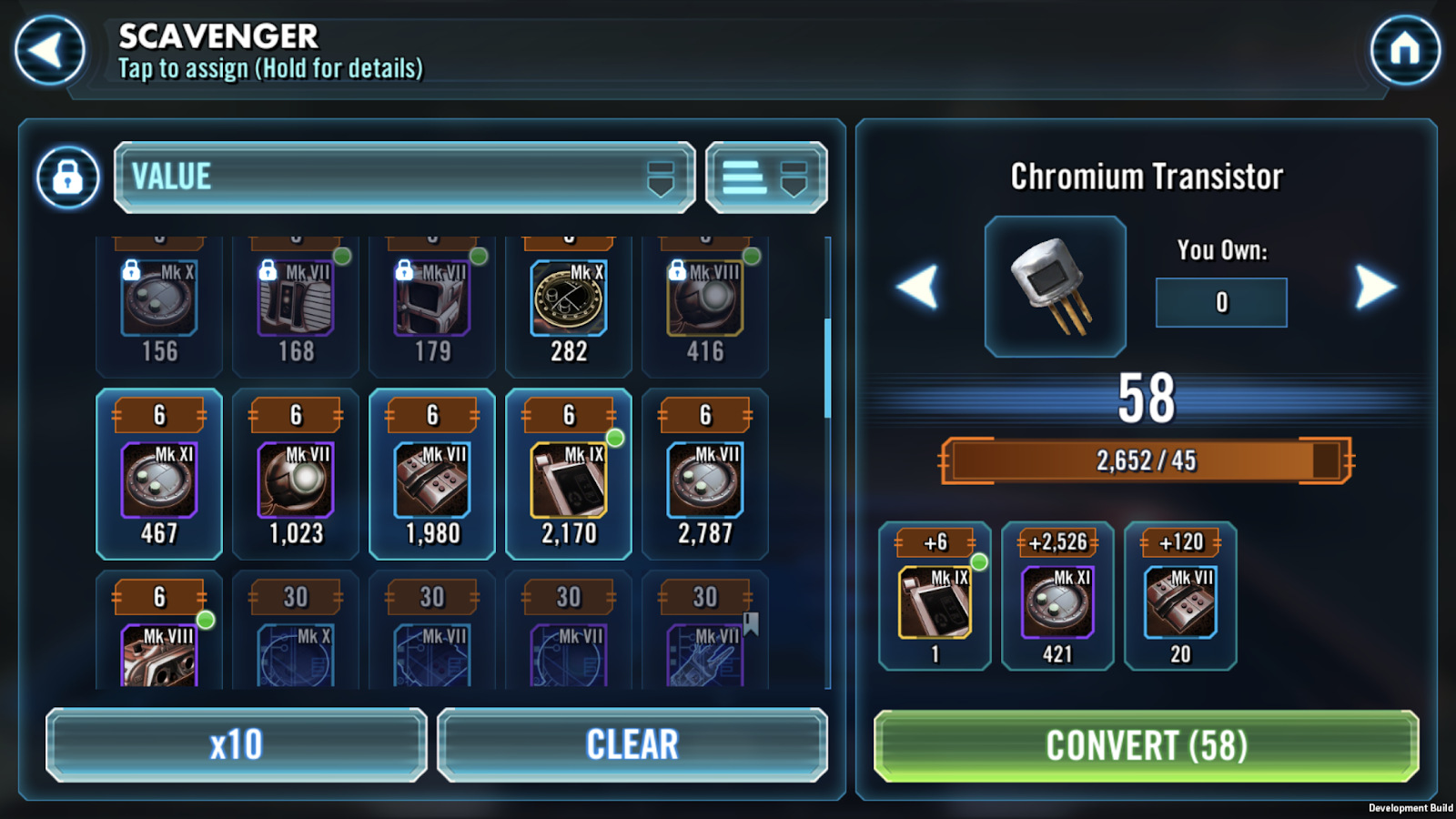 To be clear - every piece of Scrap can be constructed from a specified range of different pieces of gear. You can choose which pieces to funnel into the creation of Scrap, depending on your inventory & your needs. If you’re worried about accidentally adding a valuable piece of gear that you want to save for a different character at a pre-Relics gear tier, you can use the Lock feature to prevent that piece of gear from being able to be scrapped down. You can also tap-and-hold to bring up a slider, in order to add lots of gear in one operation, or to go and obtain that gear through the find flow. You can use the multi-select button to add multiple amounts of gear at a time with one tap. Finally, if you combine more gear in an operation than you need, but not enough to craft an additional piece of scrap, the “remainder” will sit in the Scavenger until you credit it towards the next material creation.

We’ll speak to the gear lists for each scrap piece and other details in future posts, but at a high level – for most longtime players, Relic Levels 1-3 upgrade requirements are going to be very light, and Relic Levels 4-7 are going to be challenging and require higher-tier gear. Longtime players are very likely to have all the gear and Signal Data they need to make upgrades 1-3 within a few days of getting a character to G13. We are aware of how challenging & momentous it is to take a character to G13, and our intent here is to make sure that the hard work of getting to G13 is further rewarded. After that initial rush of power from a relic, the costly further upgrades are there to prepare characters for elite endgame PvP & PvE fights – including upcoming content.

Thanks for reading! Up next, you can expect some more information on the economy and our intent / expectations around the launch of this feature, and we’ll also be reading initial feedback and asks as part of preparing for upcoming Q&As and other discussions with you.