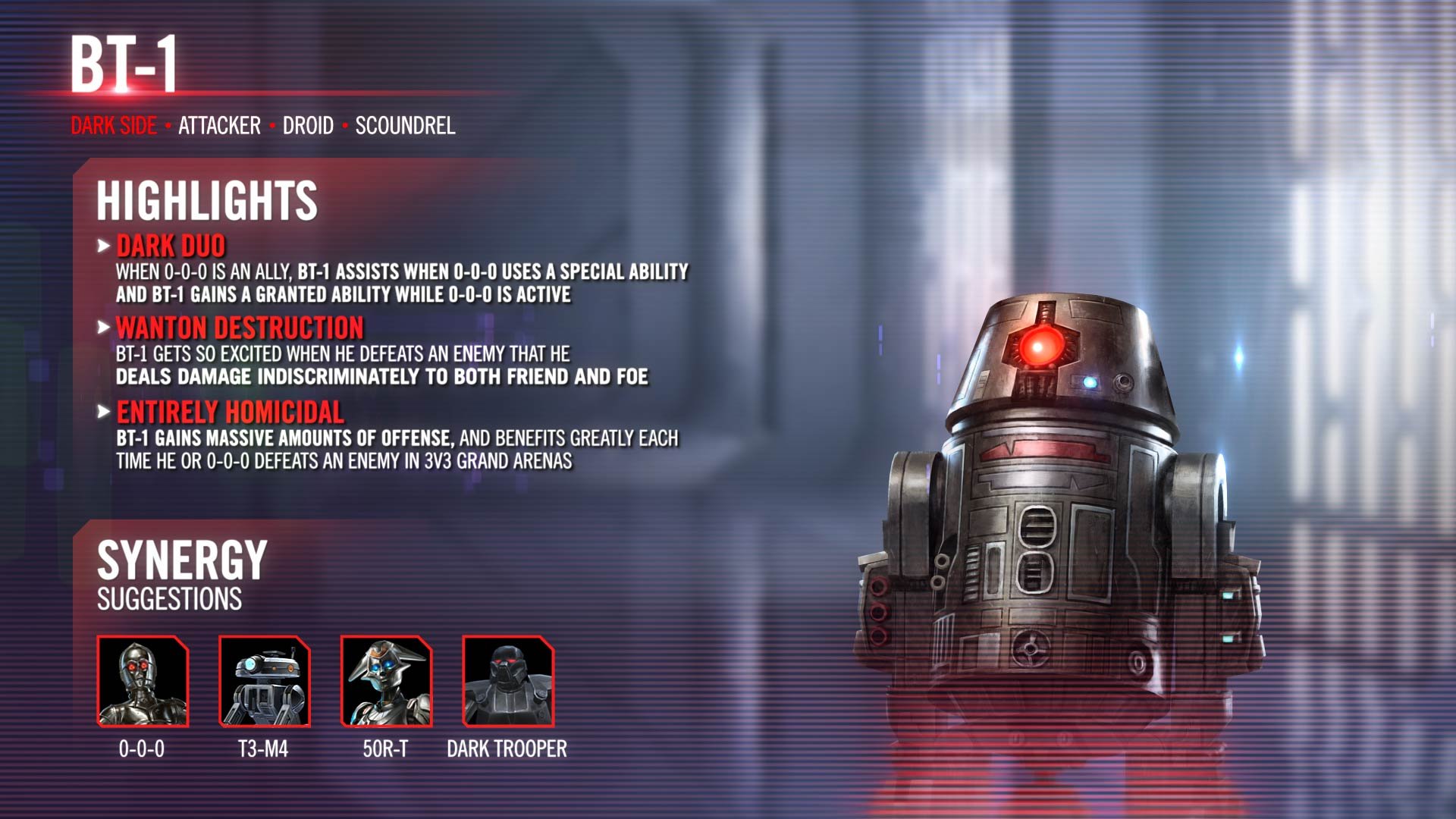 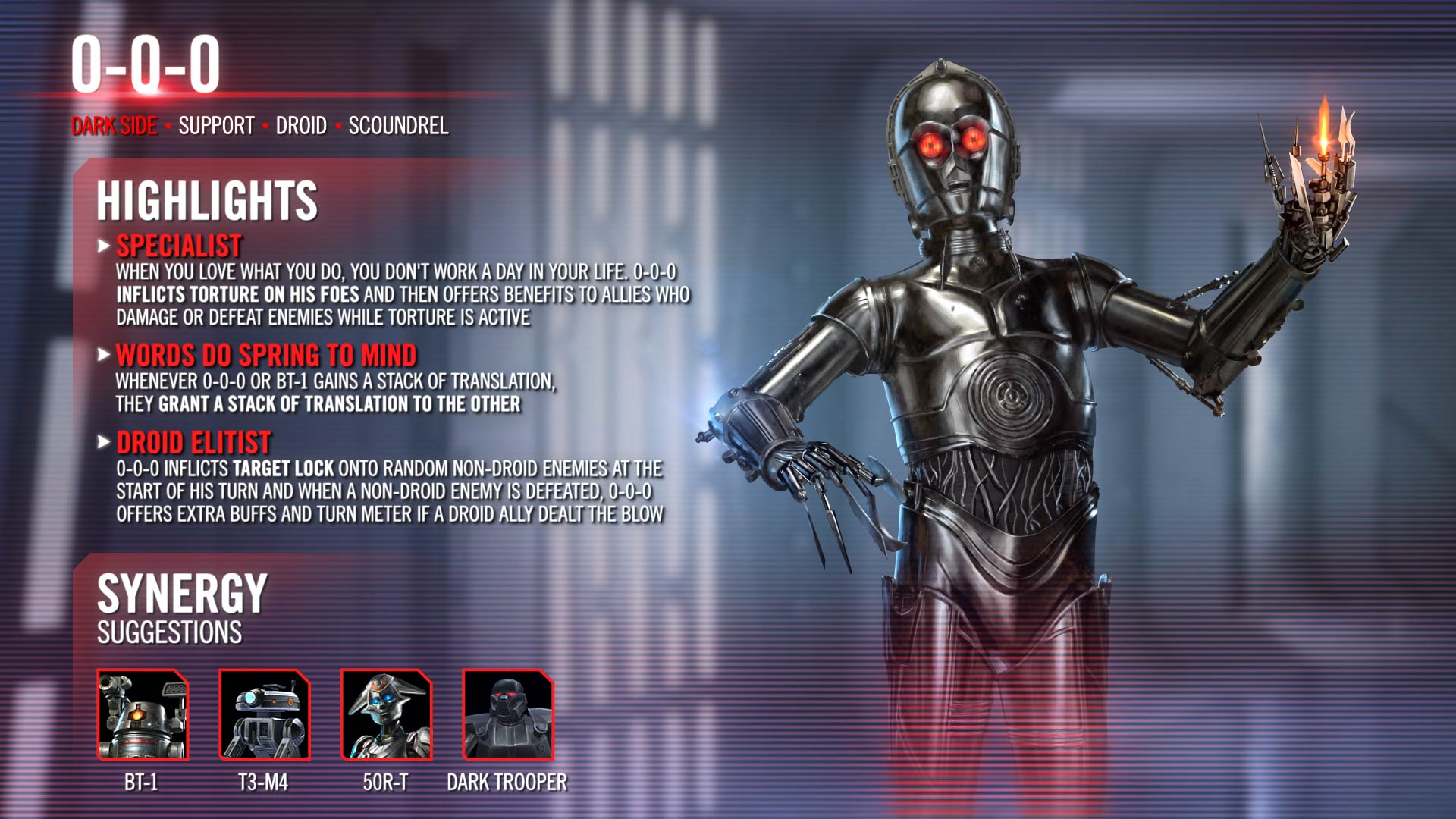 Key Attributes:
Inspiration:
Strategy Tips:
FAQ:
Do I have to complete two Marquees, one for each character?
No, the units are combined into a single marquee! Each tier will have two encounters, each covering a different ability on a character.
Because of the way our messaging system works, Auto-battle has been disabled in all tiers of the Marquee.

What do I need for the Legacy Tier, and what are the rewards?
You will need both BT-1 and 0-0-0 at 5* or higher. Because of the higher investment required, you will earn 5 Omicron Materials and two titles and two portraits for your account.

Final Text: Deal Physical damage to target enemy three times and inflict a stack of Damage Over Time for 2 turns.

Final Text:At the start of battle, BT-1 gains 10% Critical Damage for each Droid ally, 10% Potency for each Dark Side ally, and 5 Speed for each Scoundrel ally. If 0-0-0 is an active ally, gain the granted ability Kill Them All. Whenever 0-0-0 uses a Special ability, BT-1 assists dealing 40% less damage.

Kill Them All (CD:5) - Deal Physical damage to all enemies and call 0-0-0 to assist.
While in 3v3 Grand Arenas: whenever BT-1 or 0-0-0 defeat an enemy, their cooldowns are refreshed and they gain 30% Turn Meter.

Final Text: BT-1 gains 100% Offense. Whenever BT-1 defeats an enemy, he gains the granted ability Haywire and takes a bonus turn. During this bonus turn, BT-1 removes Ability Block from himself and can only use the granted ability Haywire.
Haywire: Deal Physical damage to all other characters, reduced by 75% for allies, which can't be evaded; this damage can't defeat allies or enemies.
0-0-0
ABILITIES:
BASIC:Fatal Shock

Final Text: Deal Special damage to target enemy and inflict Shock for 1 turn. If the target enemy is non-Droid and is already inflicted with Shock, Stun them for 1 turn instead. If this ability defeats an enemy, gain a stack of Translation (max 3) for 3 turns.

Final Text: Deal Special damage and inflict Torture on target enemy for 1 turn, which can't be copied, dispelled, evaded or resisted. If the target enemy already had Torture, instead deal Special Damage to all enemies and grant all Dark Side allies a stack of Translation (max 3) for 3 turns.
While in 3v3 Grand Arenas: Torture inflicted from this ability lasts for 2 turns. If BT-1 is an active ally, BT-1 and 0-0-0 recover 20% Health and Protection; if this ability defeats an enemy, all Dark Side allies gain 10% Offense (stacking) for the rest of the encounter, doubled for Dark Side Droids.
Torture: Receive bonus damage equal to 10% of this character's Max Health when damaged by an attack; reduce Defense by 10% (stacking, max 50%) for the rest of the encounter when damaged by an attack; can't gain bonus Turn Meter


UNIQUE 1: Interrogation Protocol
Final Text: Dark Side allies gain 20% Critical Damage. Whenever a Dark Side ally uses an ability on an enemy with Torture, grant that ally 1 stack of Translation (max 3) for 3 turns. Dark Side allies gain 5% Potency for each stack of Translation on them, doubled for Droids.
Translation: Beneficial effects build based on the cumulative number of stacks:
1 stack: Gain 30% Max Health
2 stacks: Gain 15% Critical Chance
3 stacks: If only one ally who grants Translation is present, decrease this character's cooldowns by 1 when that ally uses their Basic ability (limit once per turn)


UNIQUE 2: Drain Organics (Zeta)
Final Text: Whenever 0-0-0 or BT-1 gain a stack of Translation, they grant a stack of Translation to the other (limit once per turn). At the start of 0-0-0's turn, inflict Target Lock for 1 turn on a random non-Droid enemy that doesn't already have it. Whenever a non-Droid enemy is defeated, the attacking ally recovers 30% Health and Protection. If the attacking ally is a Dark Side Droid, they also gain Offense Up for 2 turns and 15% Turn Meter. If the attacking ally is BT-1, he gains Offense Up for 2 turns and 30% Turn Meter instead.