7* Padme Without Grievous! Use Geonosians, Asajj and B2!

Arobot19900
1 posts Member
May 4, 2019 2:31AM edited October 2020
Let me start by saying I am not the first one to 7* Padme with Poggle Lead, Geonosian Spy, Sun Fac, Asajj Ventress and B2 Super Battle Droid. I first heard about it on Reddit from neo2551
www.reddit.com/r/SWGalaxyOfHeroes/comments/bkcknu/7_padme_with_g9_b2_g11_poggle_g12_3_pieces_zzav/
Our mod ideas were similar, but our technique were a little different. Before I get into that let me state this is very RNG heavy (took me an hour of attempts and neo2551 about 2 hours) and that I had good mods.

The team, abilities and the mods
Poggle Lead- G12 Speed/ HP set with protection triangle and cross (needs to be faster than Geonosian Spy) only leadership and special omegas needed. (could have used less gear probably)
Asajj Ventress- G12 and 3 pieces CC/CD set with CD triangle and offense cross (needs high speed in order to use her 1 special and dispel buffs, secondary focus on offense) rampage zeta mandatory, basic omega required, other omegas are nice to have (plus she is just a good character in many avenues so why not max)
Geonosian Spy- G12 same mod idea as Asajj special and unique omega highly recommended
Sun Fac- G12 and 3 pieces with 4 health and 2 defense, protection arrow, triangle, cross (health may have also worked if 6E mods) focus on tenacity with good speed omegas aren't needed but nice to have
B2 Super Battle Droid- G12 and 2 pieces, with all health mods, protection arrow, triangle and potency cross focus on potency first then health, speed isn't needed. Special required for omega, unique omega is helpful, basic not needed for this event (Could have been less gear, but would have to use neo2551 method probably, see below.)

Method:
So neo2551 did this by using B2's special to remove buffs, hoping that it would not remove Padme's buffs, and then after using Poggles special for offense up, one hitting Padme with Geonosian Spys Special.
What I did was different, potentially less RNG, but my charactors were all G12 and his were not. I would not use B2's special until I killed Padme, instead hoping that General Kenobi targeted either B2 or Sun Fac with his mass assist. Using this method had the advantage of not relying on B2 to remove buffs from everyone but Padme, but required higher gear so I could survive the opening barrage and then 1 shot Padme. The rest of the strategy was the same of killing Anakin and then Fish Jolee.

I will say, there were some attemps I didn't even come close, and some where I got close but couldn't finish. If you try this team and guide, be patient with yourself and the game. You only need to win 1!

Here is the link to my swgoh.com account to prove I didn't use Grievous (I 7* Padme after refresh so it will show later)https://swgoh.gg/p/846966689/characters/ 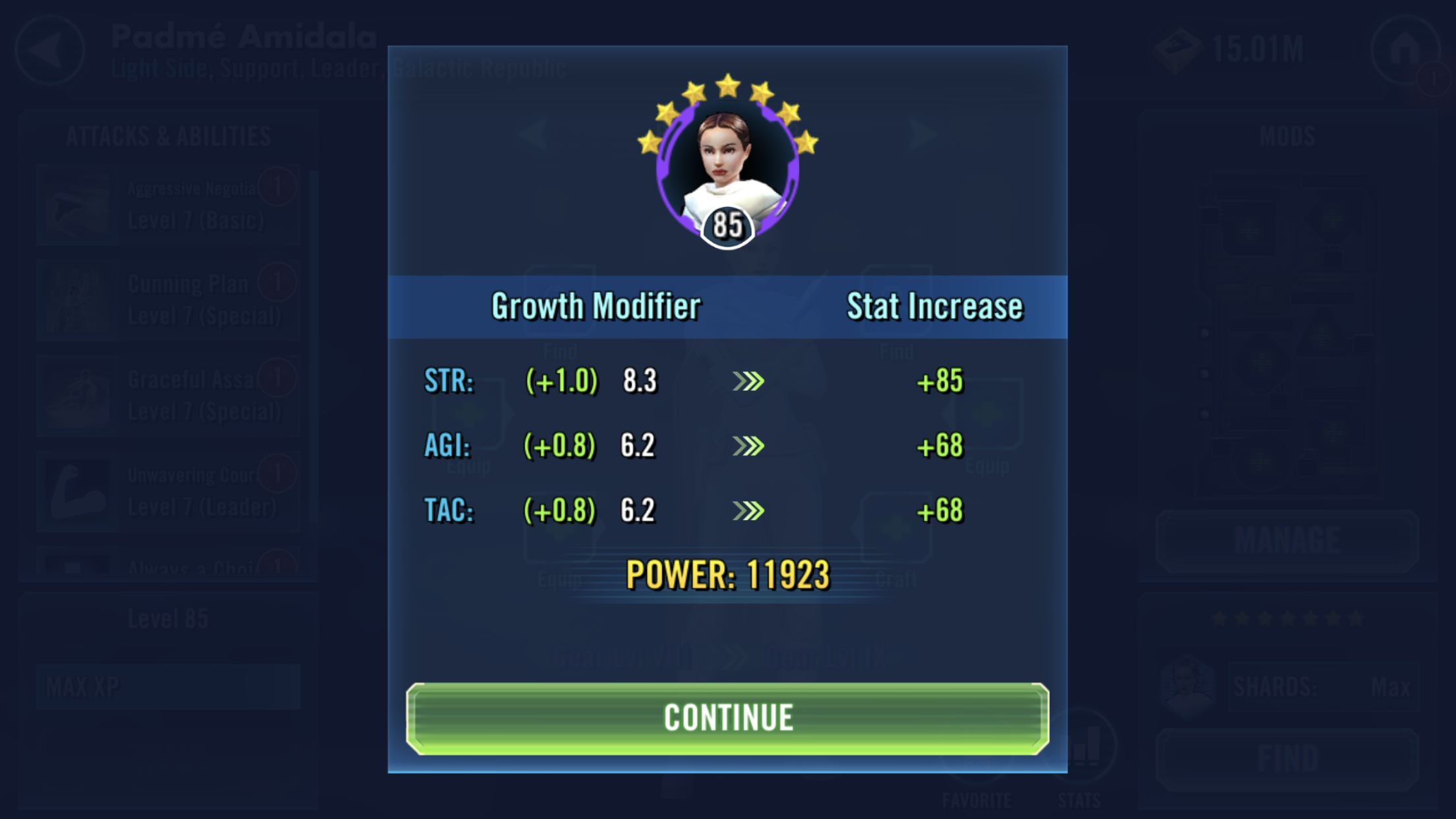 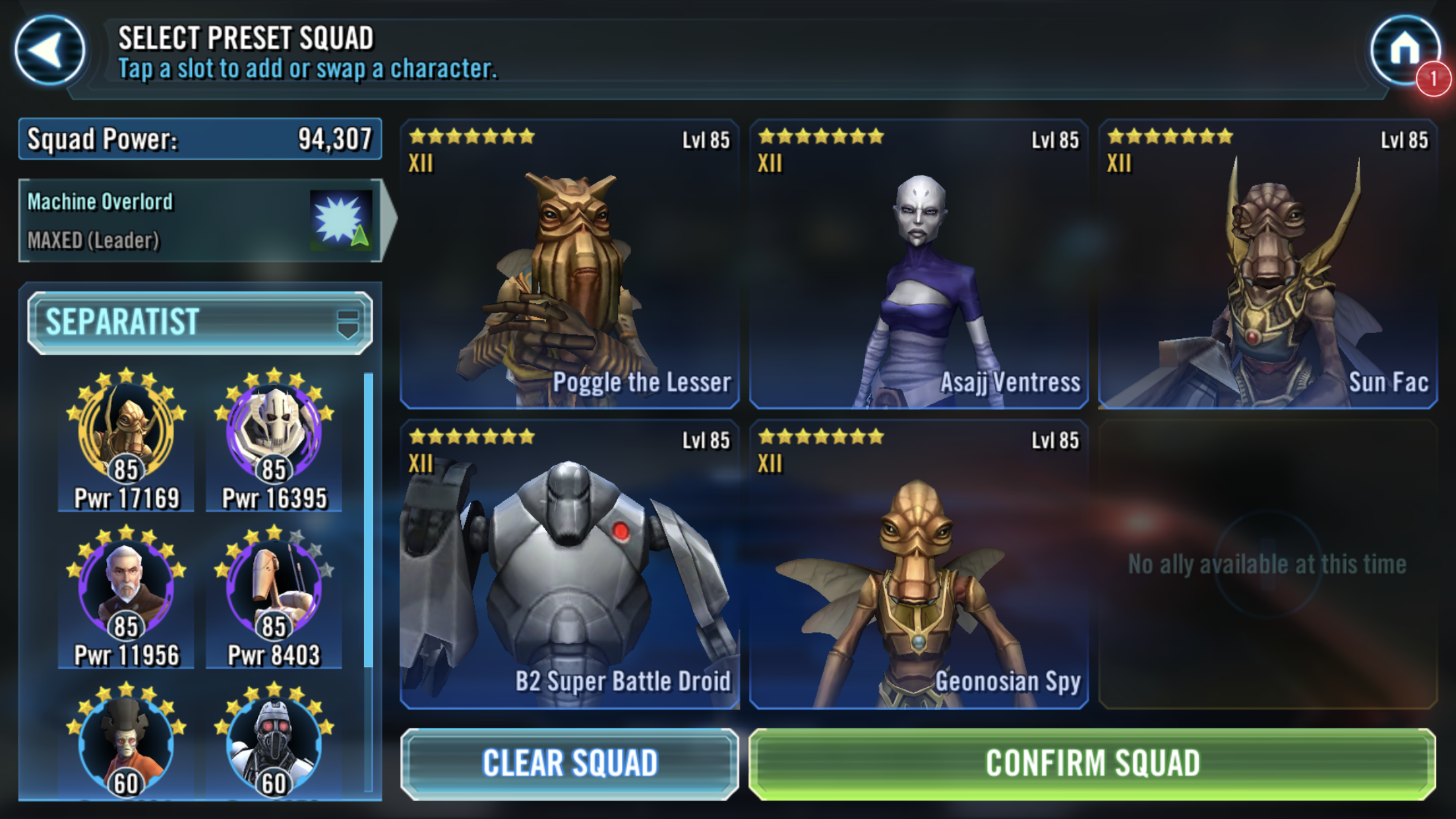 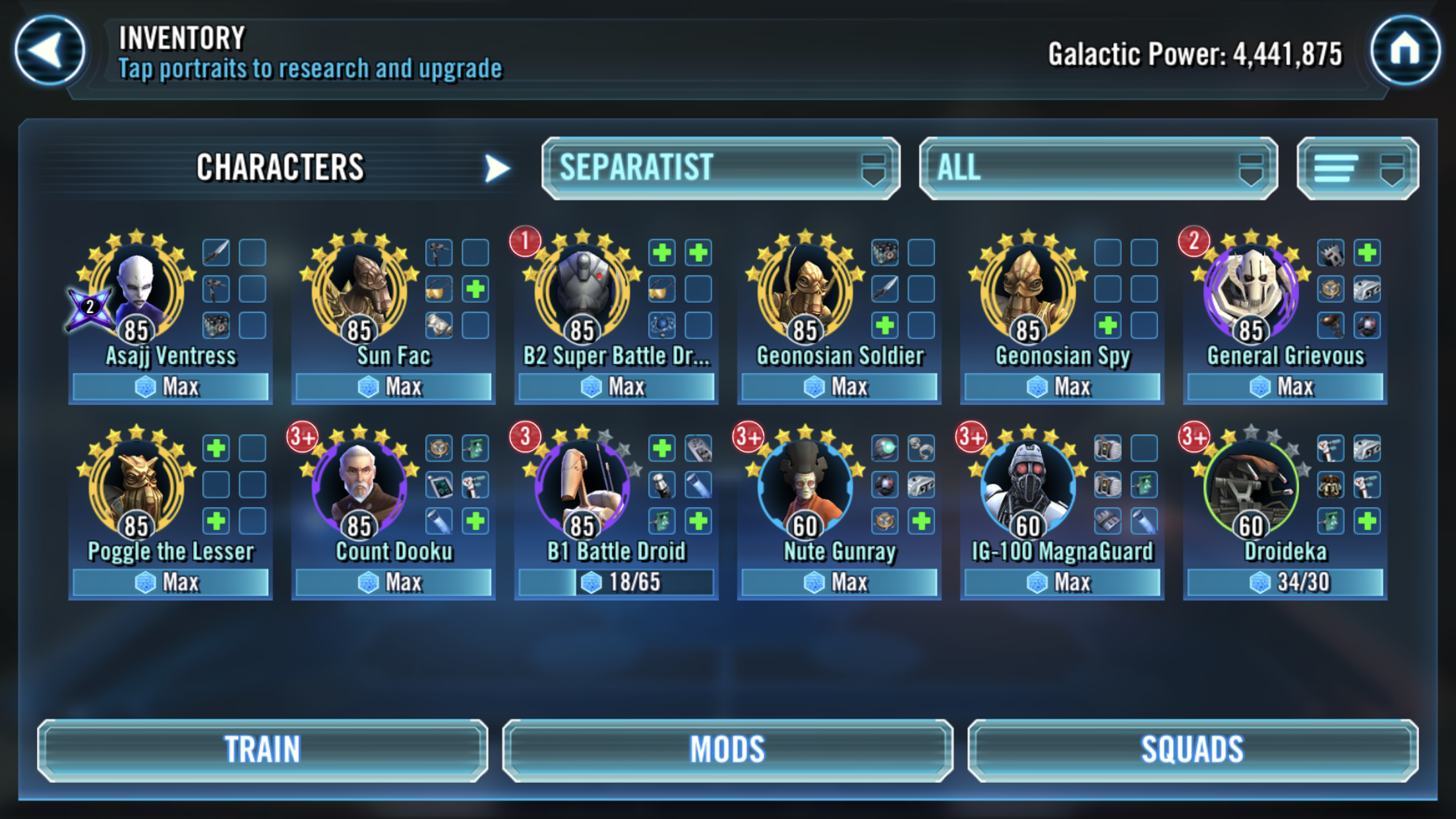