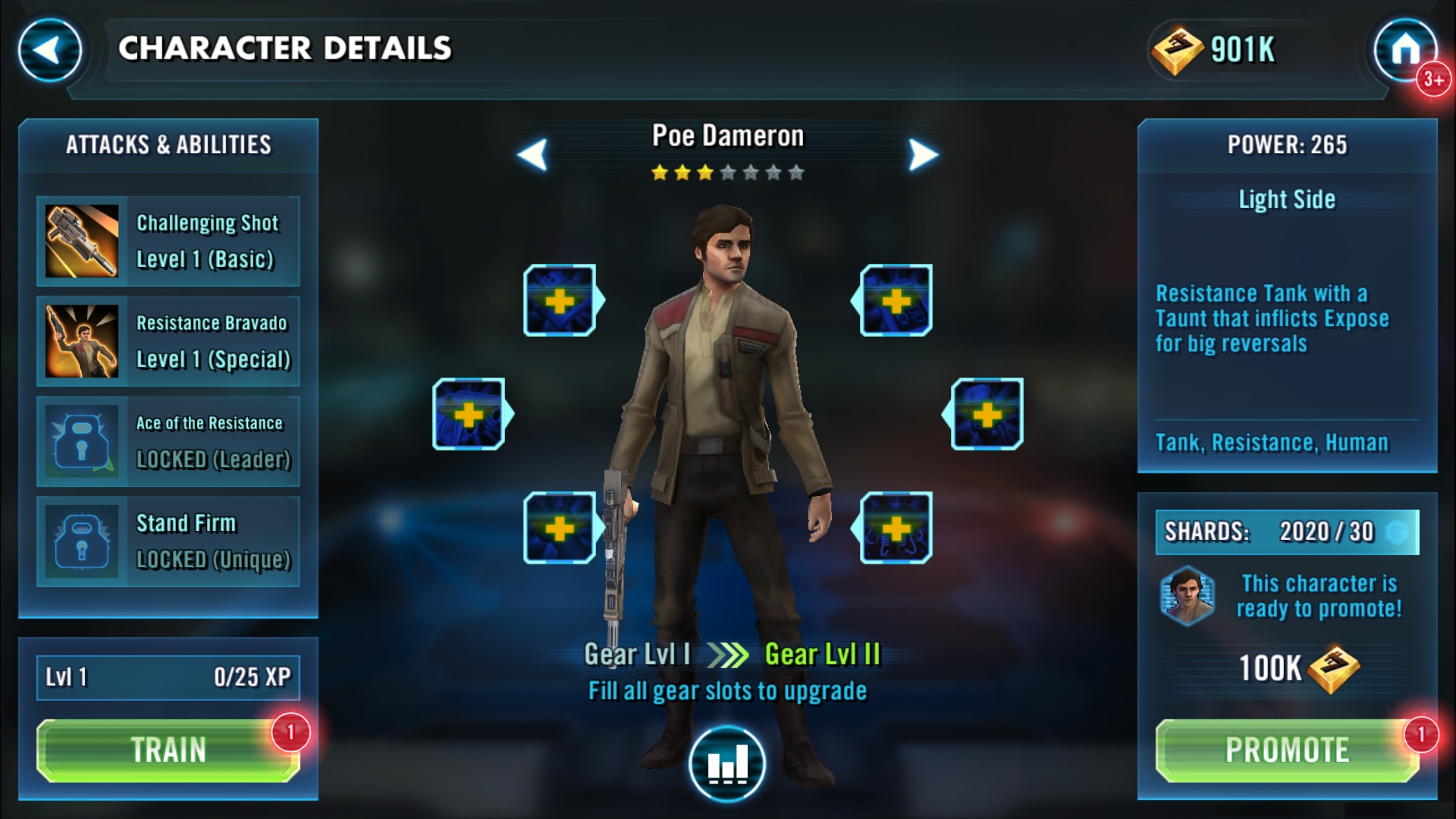 Poe Dameron is a nice leader for a Resistance party, who are about applying the Expose debuff and bursting enemies down one at a time, so you will find the potency buff from Poe’s Ace Of The Resistance useful. Also, don’t forget his Resistance Bravado which has a chance to expose all enemies. That ability when followed by an AoE attack deals great damage.

Where to use
Resistance Bravado applies taunt on top of the AoE Expose. In features such as Light Side Battles, Poe would probably be defeated from his taunt, causing you to miss out your 3-star completion. However, it doesn’t matter in Squad Arena. Poe would be defeated, but his opponents would suffer even more.

Unit Synergy
If you are looking for the AoE attack after the AoE expose, Jedi Knight Anakin is a good one to choose. If Poe is defeated after he uses his Resistance Bravado, Righteous Fury will grant Anakin meter fill and offense buff. Then, you can use Smite to clear off all the exposed enemies and apply his on-kill offence buff to allies. 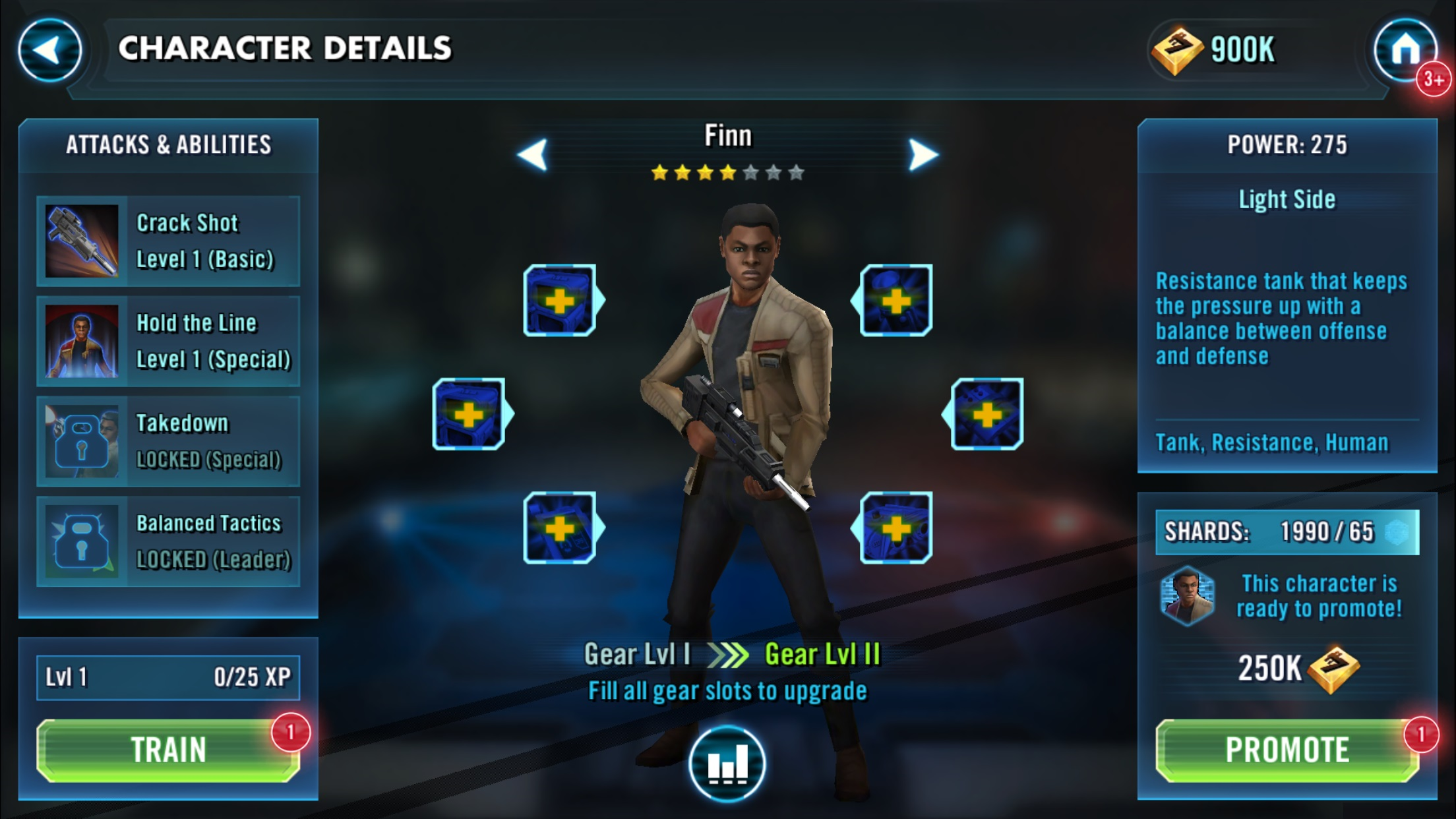 Overview
If you are looking for a unit that’s easy to use and fits everywhere then Finn is the one to go after. Finn is simple and powerful. His Balanced Tactics provides an offense and defense buff which fits well with any party, and his Takedown ability can literally take an enemy down if both the stun and expose effects go off.

Where to use
At Light Side Stage 5, you will face Count Dooku, a powerful boss with 100% counter chance. However, even Dooku can’t counter when he is stunned. So if Finn can land his Takedown on Dooku, you are half way from beating the node.


Unit Synergy
After an enemy is exposed by Takedown, you will need someone to deliver the finishing blow. Resistance Trooper is a perfect candidate to get the job done. His Opportune Strike gets -2 turns on its cooldown if the target has any negative status effects. Using Takedown followed by Opportune Strike will give your fight a perfect start. 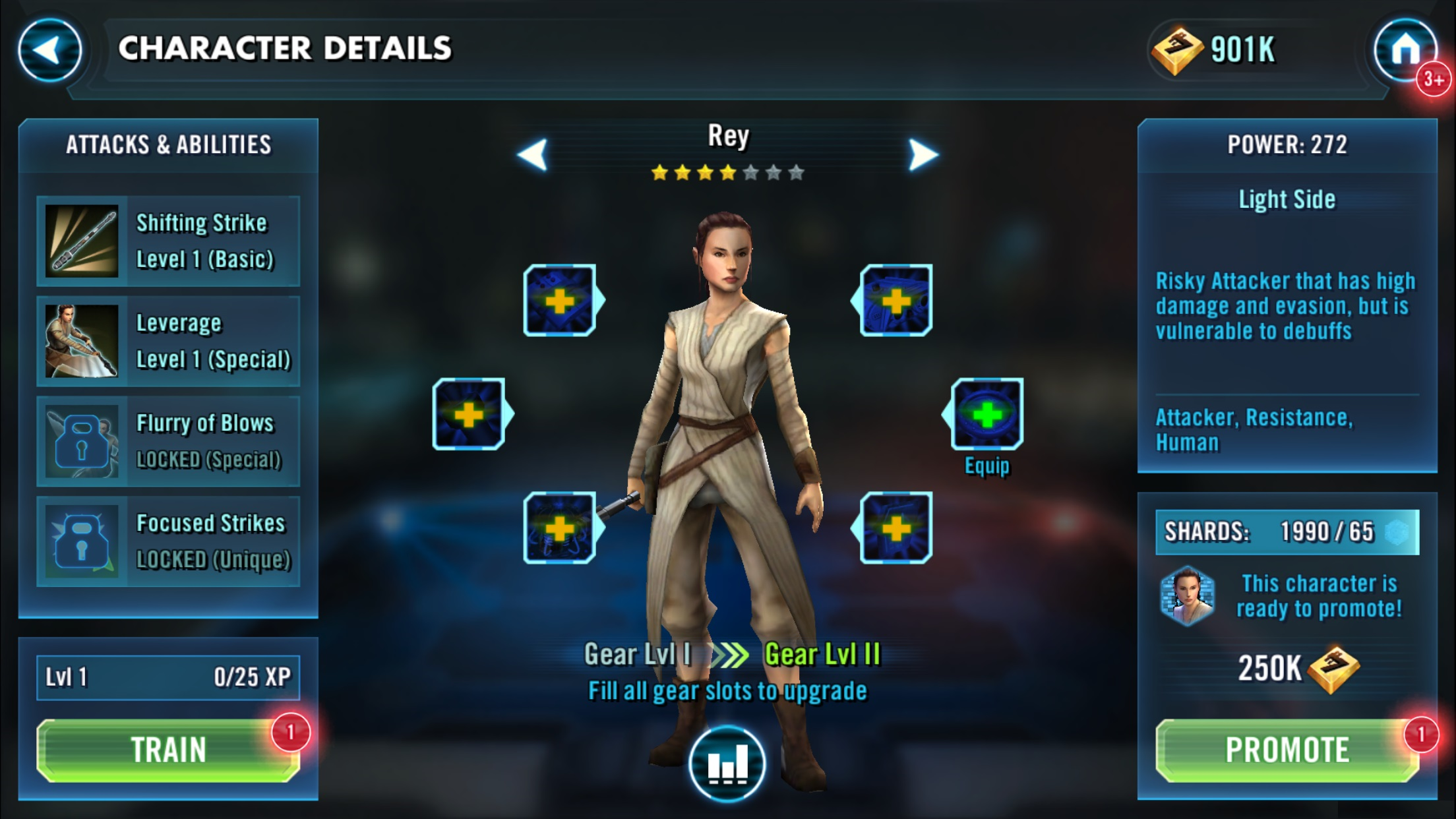 Overview
Rey’s style in combat is to build up her buffs with Shifting Strike and Leverage and then deliver a heavy attack with Flurry of Blows. It would take time to pull off the combo, but the payout is incredible: a 4-hit attack with the offense buff from Leverage and Focused Strikes would take down bosses quickly, as if they were a weaker enemy.

Where to use
In Light Side Battles and Squad Cantina, you will usually encounter one or two bosses with a crowd of weaker enemies. In this case, you can set up Rey’s buffs as you are taking out the weaker enemies first. When all the weaker enemies are down, chances are that Rey will be ready to deliver her Flurry of Blows and finish the boss for you.

Unit Synergy
To use Rey to her full potential, it’s important to use Leverage when she has a buff on her. Princess Leia’s Against All Odds allows her to give critical chance buff to Rey so she can skip the step of Shifting Strike, go directly to Leverage, and deliver a faster and more powerful Flurry of Blows.